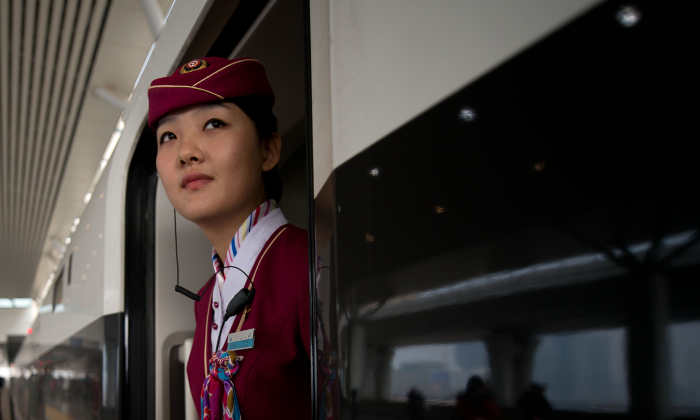 Love persists, despite being apart for months at a time, with sometimes just a glance of each other through a window.
BY Daniel Holl
TIMESeptember 7, 2019

A railroad engineer who had less than two minutes to share together with his girlfriend, a railroad attendant, took the opportunity to express his wish to marry her. A camera crew ran along with him as he found his girlfriend waiting at the door of a train car, reported in a program titled “A Date at 00:37,” by Chinese state media on Feb. 10.

Hao Kang, pronounced How Kong, works as a railway engineer in Shaanxi Province, China. He comes from a small county bordering the Yellow River, as does his girlfriend, now fiancée, of four years.

Lei Jie, pronounced Lay Jyeh, is a railway attendant, whose work is similar to that of a flight attendant. Though they both work on the railway, they do not work on the same lines, and there is only one station where their two lines meet—Yulin station.

Even though Lei’s train will pass through Yulin four times a week at 12:37 a.m., the train is only scheduled to stop for eight minutes at a time. Chinese railway attendants are also not allowed to use cellphones while they work, so Lei can only send a message to Hao before her journey begins to his station, and has no way to contact him when she arrives.

On top of that, Hao’s break time is not rigidly set. It is not uncommon that the two can only meet once every few months. In a year’s time, even including when their vacation time is together, they can only spend about one week together in total.

Hao describes some of the rare times he gets to see her. As he sits in the driver’s seat of the train he points out the small window, and with a wide smile describes how he can sometimes see her shadow in the window of her train as it passes by his.

“Sometimes I can see her silhouette. But even when I see her—I don’t really see her,” Hao said in the video. “She works on the railway, and I work on it too. We maintain our affection through the railway. This is how we persevere.”

Persevere they do, as Hao planned to propose to her during the most significant Chinese festival, the Lunar New Year.

That evening, Hao was off work and he arrived at the station ready to make his proposal. Lei’s train was late from snow on the tracks, and could only stop at the station for five minutes.

Lei told Hao that she would be in car number nine. However, since there were so many passengers that night, she was moved to car number one. Without her phone, she had no way to let Hao know of the change.

Hao ran up and down the station, looking for his girlfriend.

Luckily, with the help of the camera crew, Hao found Lei. Short of breath, he stepped into the loading doorway of the train car, and they took each other’s hands.

With smiles on their faces, they exchanged briefly about whether or not he had to get off the train. Then, suddenly and almost unseen by the camera, Hao slipped a small red box into Lei’s hands. He unzipped his jacket and handed her a package, giving her a hug. “Be safe,” Hao said to her, and he stepped off the train.

Hao stood on the station platform, facing Lei as she looked back at him as the warning bells of the train’s departure sounded in the background. With his voice cracking and his shoulders tensed, he reminded Lei to close the door.

Lei then handed Hao a gift—hand lotion. “When you go, I’ll go,” Hao said. Lei, looking as if she was holding back tears, closed the door. They waved to each other as the train pulled away.

The meeting lasted only one minute and 52 seconds.

“I didn’t think that it would be so fast! Thank goodness you helped me find her,” Hao said with a big smile and a chuckle. “There’s a lot of things I didn’t say. What I wanted to say to her was—Marry me. This year, I want to marry her. I didn’t have time to say it.”

However, Hao expressed his idea. In the car, Lei sat down and looked inside the red box, sniffling with tears. Inside, she found her engagement ring.

They work in different trains, but both go through the same station (Yulin)

Hao: “Sometimes I can see her silhouette. But even when I see her—I don’t really see her. I can only look out of this small window. She also stands by a door, which also has a small window. Then the windows go by each other.”

In 2018, with all of their time off together, they in total spent one week together.

Hao: “She works on the railway, and I work on it too. We rely on the railway to maintain our feelings. And this is how we persevere.”

Even during the Chinese Lunar New Year, they have to continue working.

In the early morning, when the train Lei Jie was riding stopped at Yulin, Hao Kang found her and gave her the ring that he had prepared.

Song: “Because of Love” by Eason Chen and Faye Wong 陳奕迅、王菲：因爲愛情

Since the train only stops at Yulin for 5 minutes, Hao Kang didn’t have time to say “Marry me.”

Hao: “I didn’t think that it would be so fast! Thank goodness you helped me find her. There’s a lot of things I didn’t say. What I wanted to say to her was—Marry me. This year, I want to marry her. I didn’t have time to say it.”

Daniel Holl
China reporter
Follow
Daniel Holl is a Sacramento, California-based reporter, specializing in China-related topics. He moved to China alone and stayed there for almost seven years, learning the language and culture. He is fluent in Mandarin Chinese.
SHARE
EmailFacebookTweetCopy Link
You May Also Like 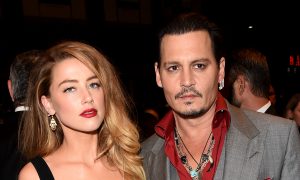