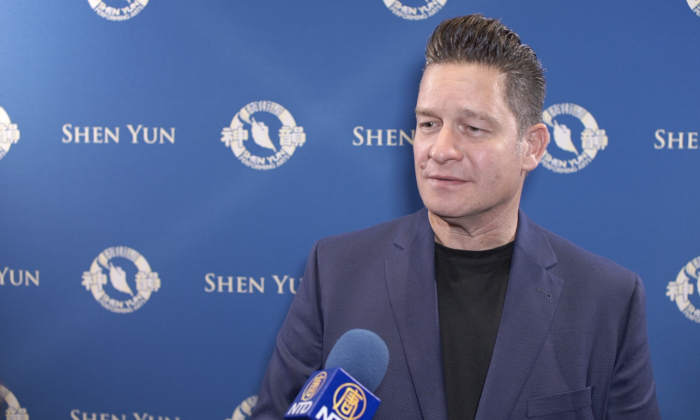 PHOENIX—Car talk radio show host Frank Leutz is a man of many accomplishments. Besides running a successful repair shop in Chandler, Arizona, Leutz is also a jazz trombonist who has played in venues such as Carnegie Hall and Lincoln Center.

So after watching New York-based Shen Yun Performing Arts for the first time at the Orpheum Theater in Phoenix, Arizona, Leutz was able to appraise the production based on his experience in the industry.

“What struck me as really compelling was the synchronization between the pit orchestra and the performers on stage.”

The standout of the performance for Leutz, host of WrenchNation Car Talk Radio, was the erhu soloist. The erhu is an ancient two-stringed instrument that is described as being to convey a wide range of emotions.

“That was phenomenal,” he said.

“That was my highlight of the whole show.”

Leutz also praised the pianist and the vocalists, as well as the live orchestra, saying they did a phenomenal job.

The radio personality found the message of the performance particularly striking.

“[It] gave us a sense of unity as humanity, through art and music,” Leutz said.

“I think it’s a wonderful message.”

The performance, Leutz said, displayed a “positivity that we’re all one, and we may be different but we really are one,” adding that this was something sorely needed today.

It was also a learning experience for the radio show host, who said he learned more about the art and style of different dynasties. Many of Shen Yun’s dance pieces revolve around the style and dance forms used in specific dynasties, such as the Tang (7th to 10th centuries) and Qing (17th to 20th centuries) dynasties.

He noted that often, depictions of Chinese history has focused on war and conquest, so it was good to be reminded by Shen Yun of the art and culture of the people.

“Absolutely love it,” she said.

While Wong is ethnically Chinese, the production was equally as edifying for her.

“This was really enlightening for me,” Wong said.

“Because growing up … we just celebrated Chinese New Years, and so you go through the traditions, you do it because your parents told you to and taught you to, and now this is about seeing the culture.”

“It’s about absolutely seeing my culture, where my family is from, and it was just beautiful.”

Traditional Chinese culture is also grounded in spirituality and belief in the divine. As depicted in the stories and songs performed by Shen Yun, these ideas formed the bedrock of a civilization that lasted thousands of years. Leutz said the underlying message of spirituality was a powerful one.

“I think we all have our spiritual walk in life,” he said.

“[It] lights up the soul, brings out the spirit.”

Wong also appreciated the spirituality brought forth throughout the program.

Leutz said he was a fan of Shen Yun, and will definitely be back to see the show when it returns, as he thinks there is a lot more he can learn about traditional Chinese culture. He added that he would recommend it to anyone.

“I’m going to text my family right now and let them know,” she said.

“All my Asian brothers and sisters, ‘I went to see Shen Yun and you guys should too.'”