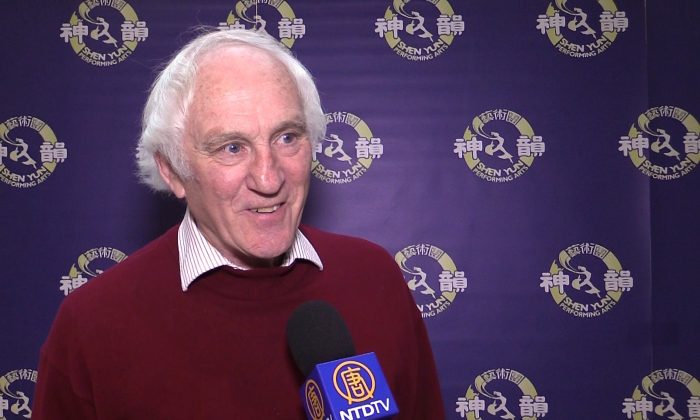 TORONTO—Radio host Tom Quick, who has been hosting and producing radio since 1975 and is currently with FM 98.5 CKWR in Kitchener-Waterloo, is a great advocate of classical music and owns a collection of more than 7,000 CDs in his home library.

So on Saturday afternoon the classical music aficionado was thrilled to discover a new musical experience when he took in the Shen Yun Symphony Orchestra at Roy Thomson Hall in Toronto.

“I would say they are, without question, one of the best orchestras I have heard in a long, long time. I love the blend of the Chinese traditional music. They are a first-class orchestra,” he said.

Shen Yun’s orchestra is unique in that, amid the familiar grandeur of a Western symphony, it includes traditional Chinese instruments like the erhu and pipa in its regular ensemble.

“It’s quite an experience. I thoroughly enjoyed it. I’m very impressed with how they mix the traditional music from China with the Western music,” Mr. Quick said in an interview during intermission.

“And the young lady who played the violin (Fiona Zheng) was just quite brilliant, absolutely brilliant.”

He was also impressed by the range of the orchestra, going from original scores with Chinese melodies to classical pieces from composers like Tchaikovsky and Sarasate.

Mr. Quick had warm praise for the virtuoso soloists as well, who use bel canto operatic technique in their performances of Chinese works.

“The soloists were brilliant, absolutely brilliant. Variety is the spice of life, and they certainly presented that in the first half,” he said.

“It was very, very good. I hope they do more. I hope they come back,” he added, especially noting that soprano Min Jang “was amazing.”