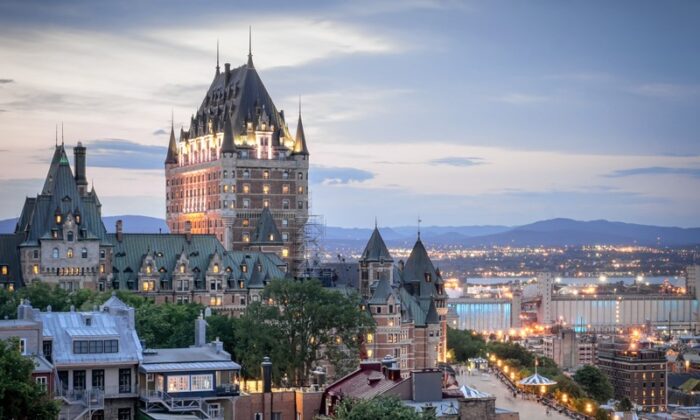 Quebec City: A Taste of French Culture in North America

Could you be in France? You might be roaming Paris, but a picturesque coastal village in Normandy seems more likely. Maybe you’re taking in the spellbinding charms of one of the sister cities Liège or Namur, two beguiling towns in the French-speaking region of Belgium.

Wherever you go in this maze of narrow streets and storybook scenes, you could be traveling through a quaint European village, yet you haven’t left North America.

The capital of French-speaking Canada, Quebec City is one of the prime Francophone destinations in the world. It’s also an enchanting city with centuries of history and warm and welcoming people.

In the summertime, the scent of freshly baked croissants wafts through the air and locals share beautiful plates of charcuterie and sip Gamay Beaujolais in sidewalk cafés. In the wintertime, snow blankets The Battlefields Park in Montcalm, and the mighty St. Lawrence River glistens with ice.

The oldest municipality in the province of Quebec, Quebec City was established in 1608 by French explorer Samuel Champlain. Today, the town is the only fortified city in North America north of Mexico, with Canada’s “Great Wall” spanning close to three miles. Immerse yourself in Quebec history and discover the four gates that remain: Porte Saint-Jean, Porte Saint-Louis, Porte Prescott, and Porte Kent, as well as the star-shaped Citadel on top of Cap Diamant.

The two-level city—there’s an Upper Town (Haute-Ville) and a Lower Town (Basse-Ville)—deserves several days to explore. Though the stairs joining the two sections run steep, both Upper Town and Lower Town are walkable and brimming with locally-owned restaurants, cafés, and shops. Climb the “Breakneck Steps”—the city’s oldest, originally built in 1635—or more than two dozen other sets of stairs if you’re feeling ambitious. Or take the lazier route and pay CAD 3.50 (each way) (about $2.60) to ride the funicular up and down. The ticket price includes jaw-dropping views.

Teeming with cute shops and bistros, Quartier Petit Champlain is one of Old Quebec’s must-see attractions. The main drag is the camera-ready Rue du Petit Champlain, North America’s oldest commercial street. Nearby, Place-Royale (where Samuel Champlain founded his “abitation”) with its massive Fresque des Québécois mural encapsulating 400 years of history, and the Notre-Dame-des-Victoires Church (the oldest stone church in North America) will whisk you away to another place and time. Window boxes and fairy lights adorn French-inspired, low-rise stone buildings donning colorful shutters, chimneys, and dormered roofs. During the holiday season, this pocket of Old Quebec is especially magical.

Architecture buffs can revel in the various grand dames around town. The eight-story L’Hotel du Parlement (Parliament) on Parliament Hill was built in the Second Empire style. Admire from afar (and take a lot of photos) or opt for a tour of the interior. In the historic district of Vieux-Québec (Old Quebec), Ville de Québec (Quebec City Hall) is another jewel, featuring gorgeous Classical, Medieval, and Chateauesque (based on the French Renaissance style) details.

The stately Fairmont Le Château Frontenac stars in almost every Quebec City picture shot from afar. Perched in Upper Town, this Neo-Chateau-style beauty is the most photographed hotel in the world. Even if you don’t stay in Le Château Frontenac, make it a point to visit. Stop by for a glass of Bordeaux in the 1608 Bar, and admire the building’s rich history and old-world ambiance.

In the quaint Old Port section of Lower Town, Le Germain Hotel Quebec City occupies a former bank building. Ceilings soar in the handsome lobby where the front desk crew pours wine and mixes cocktails nightly. A perfect companion to the building’s timeless architecture, the chic décor may remind you of a classy Art Deco hotel in Paris.

Adding brilliant colors to the cityscape, galleries stud the streets of Old Quebec. Art lovers should browse Rue Saint-Paul, where a stockpile of Quebecois artists and dealers have set up shop. Don’t miss Galerie d’Art Le Belley, an impressive depository of work from Quebecers such as Albert Rousseau, Léo Ayotte, and Bruno Coté.

For another dose of French art and culture, visit the Musée de l’Amérique Francophone, part of the Musée de la Civilisation—Quebec City’s most visited exhibition space. This museum celebrates the heritage of French-speaking America and the evolution of French culture in Quebec and around the globe. Its historic chapel is a hidden gem. Though it was deconsecrated in 1993, this former place of worship still contains an array of sacred items, paying tribute to the Catholic history of Quebec.

It’s culinary theater at Le Continental, where waiters sport crisp white jackets and ebony bow ties as they flambé shrimp with whiskey, filet mignon en boîte, and duck à l’orange for two, tableside. For wine, choose from more than 5,000 options in their extensive cellar. The collection ranges from Grand Crus to easy-on-the-wallet bottles.

To experience a more modern approach to French classics, venture to the small wine bar and restaurant Le Moine Échanson in the Saint-Jean-Baptiste neighborhood. Peek at the chalkboard menu (in French) but wait for your server to elaborate on each dish. The lineup changes regularly depending on what’s fresh and in season, but oysters on the half shell, mushroom toast, foie gras, and lamb with cabbage are a sampling.

Also in Saint-Jean-Baptiste, Le Billig Creperie-Bistro is a local pick whipping up some of the city’s most decadent crepes. After traipsing around the city for hours, reward yourself with a savory crepe filled with duck, goat cheese, onion confit, and spinach. Sate your sugar craving with a sweet crepe such as the lemon curd or poached pear.

French culture wouldn’t be what it is without macaroons, mille-feuilles, and tarte tatin. At Café-Boulangerie Paillard, pastries, breads, and pizzas are plentiful. While the vast, bustling space isn’t as quaint as you’d expect from a French bakery in Old Quebec, the flaky, buttery croissants rival those you’d taste in Paris.

Don’t be surprised when you get caught up in the allure of Quebec City, a town projecting a sensibility typically associated with Europe. That’s inevitable here. With the city’s French-speaking residents, a labyrinth of storied streets, French-influenced cuisine, and abundance of charm, French culture in Quebec City continues to delight travelers from around the globe.

The author was a guest of Quebec Original.