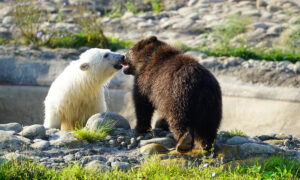 Four years ago, Chi Chi, a golden retriever rescued from South Korea, was left for dead in a garbage bag, her four legs bound together and rotting.

However, after she was rescued and nursed back to health, she has since become a hero herself and awarded the 2018 American Hero Dog Award on Oct. 5.

According to Inside Edition, Chi Chi underwent surgeries to remove 8 to 10 inches from each of her legs, and she now rocks a set of specially designed prostheses.

She attended the American Hero Dog Awards at Beverly Hills, Los Angeles, where she showed off her “sparkling collars and rhinestones on her artificial feet,” reported Inside Edition.

Even though her prostheses are customized, she needs breaks from them to relax her legs and avoid soreness and abrasions.

Chi Chi went to live with Elizabeth Howell and her husband and three other rescue dogs in Phoenix, Arizona in March 2016.

The happy pup now works as a therapy dog and sometimes meets people who are similar to her: those who have lost their limbs.

“When people hear Chi Chi’s story and experience her attitude of joy, they are often inspired to face their challenges with renewed courage and a fresh perspective,” according to the American Hero Dog Awards.

I was feeling good this morning, so I played with my giggle balls for a few minutes. You know how much I love my giggle balls, so I was happy to be feeling good enough for a short play time. 🐶💕 My muscle coordination has improved significantly since starting the treatment to reduce the inflammation in my brain. I’m still having some trouble with my right front leg and am not always able to move it how I want. I am on steroids and am also getting Hyperbaric Oxygen treatments. Hyperbaric Oxygen has been shown to repair cells damaged by radiation, so if the inflammation in my brain is a side effect of the radiation, the oxygen treatment should help. I usually sleep during the treatment and then have more energy after my treatment from all of the extra oxygen I get during the treatment. The neurologist is expected to contact us today with an update on what may be causing the inflammation. 🐶💕 Thank you for your continued prayers and positive thoughts. Please continue to pray for the following: 1. Pray for quick and complete resolution of the inflammation/swelling in Chi Chi’s brain and no negative side effects from the treatment 2. Pray that we will continue to see improvement so we know if the treatment is working or needs to be modified 3. Pray that the inflammation is treatable and not regrowth of the tumor or metastases of the cancer 4. Pray that she regains balance and full muscular coordination 5. Pray for wisdom for the veterinary team and that the necessary information and experts will be quickly identified and available 6. Pray for Chi Chi’s complete and perfect healing and for her body to be free of any and all issues 🐶💕 Thank you for voting and sharing every day until September 5 in the @herodogawards . 🐶💕 Vote here or use the link in my profile: http://herodogawards.org/dog/chi-chi/ 🐶💕 Thank you for all of your love and support and for being part of Team Chi Chi!! 🐶💕 #nevergiveup #giggleballs @americanhumane @hallmarkchannel @chickensouppets

Chi Chi used to be skittish towards humans, but with lots of love and grace, she realized no one would ever hurt her again and regained her trust in people.

Recently, the dog just had cancerous tumors removed, continuing her journey of inspiring others with courage, along with her sweet-tempered and gentle spirit.

When our family decided to adopt Chi Chi, we didn’t know her prognosis or if she would ever walk again. Even though we had not met her, we had fallen in love with her and wanted to give her the best life possible. We never imagined that she would end up positively impacting thousands of people around the world through her work as a Therapy Dog and through the inspiring messages that she shares through her social media. 🐶💕 The Hero Dog Awards was a spectacular event for Chi Chi and our family. We are truly honored that Chi Chi was recognized for her resilience, courage, forgiveness and love with the 2018 Therapy Dog Award and the 2018 American Hero Dog Award at the Hero Dog Awards. 🐶💕 Thank you for your continued love, support and prayers for our sweet girl. 🐶💕 You can see all of the pictures my Grandpa took at the Hero Dog Awards by going to this link. 🐶💕 📷 Robert Fugate, https://www.rqfphoto.com/Pets/Chi-Chi-/Hero-Dog-Awards-Gala/ 🐶💕 #nevergiveup #cherisheveryday #loveabundantly#2018AmericanHeroDog @herodogawards @hallmarkchannel @chickensouppets @beverlyhilton