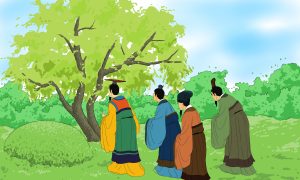 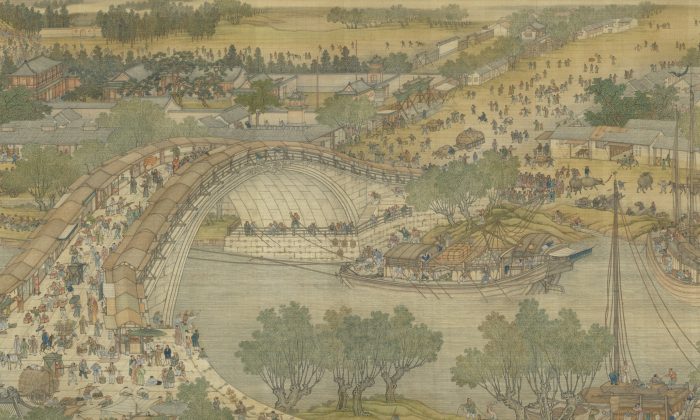 A section of the “Qing Court Version” of “Along the River During the Qingming Festival,” a handscroll dated 1736, by five artists from the Painting Academy and active at the Qing court: Chen Mei, Sun Hu, Jin Kun, Dai Hong, and Cheng Zhidao. Ink and color on silk, at the National Palace Museum (Public Domain)
Chinese Culture

‘Be pure and bright,’ the loyal official advised the king
By Tanya Harrison

Many Chinese will be visiting the tombs of their ancestors on April 5 to pay their respects, as the Qingming Festival, also called Pure Bright Day or Tomb-Sweeping Day, falls on that day this year.

Qingming is an important traditional Chinese festival celebrated on the 15th day after the spring equinox. It’s not only a day for honoring one’s ancestors but also a time to celebrate spring.

The origin of the Qingming Festival can be traced back to a legend recorded in “Zuo Zhuan,” one of the earliest Chinese works of narrative history, which covers most of the Spring and Autumn Period (770–476 B.C.).

As the legend goes, Chong Er (697–628 B.C.), once the crown prince of the state of Jin, was driven out of the state by Liji, who was then his father’s favorite concubine. During his 19-year exile, Chong Er lived in extreme poverty, with only a few faithful men to serve him. One of them was Jie Zitui.

One day, close to death from starvation, Chong Er lost consciousness. To save his life, Jie cut a piece of flesh from his own thigh and prepared a bowl of soup for his master.

Chong Er was deeply moved and promised to repay Jie in the future. Jie insisted he wanted no reward; his only wish was for Chong Er to become a king who had a pure and bright heart while governing the state of Jin, keeping it peaceful and orderly.

When Chong Er finally remembered Jie and his sacrifice, he was filled with regret. He sent a messenger to find Jie and invite him to the palace. But Jie had already moved with his mother deep into the forests of Mount Jin (in the northeast of China). The king personally went to the mountain to look for Jie but failed to find him.

When a minister suggested that they set fires on three sides of the mountain to force Jie to come out, Chong Er agreed. The fires raged for three days, but there was still no trace of Jie and his mother.

Jie was later found dead, leaning against a large willow tree. In a hole on the side of the half-burned tree, there was a note written with blood on a piece of cloth. It read:

Cutting off my own flesh to respectfully present to my monarch, offering loyalty with all of my heart,
Only wishing Your Majesty will always be pure and bright.
Dead under a willow tree and seen no more,
Better than accompanying my monarch as a remonstrating minister.
Your Majesty, if you have me in your heart,
Frequently reflect on your shortcomings when you think of me.
Your minister in the underworld died with a clear conscience,
Be diligent in governing the country so that purity and brightness will be renewed.

Tears rolled down Chong Er’s cheeks. He was so sad that he cried aloud. He tucked Jie’s note in a sleeve pocket and vowed to be a pure and bright king for his people.

King With a Righteous Heart

Jie was buried under the willow tree, and in his memory, Chong Er ordered that no fire or smoke be allowed on that day. That day was called Hanshi Day (Cold Food Day) because without fire, the people had to eat cold meals.

On the first anniversary of Jie’s death, the king, with officials in attendance, visited Jie’s tomb. To their surprise, they discovered that the large willow tree was alive and full of new branches with green leaves. It was as if Jie was greeting them and encouraging the king to remain pure and bright.

It was later recorded that Chong Er was indeed a pure and righteous king, and the people of Jin lived in peace and harmony under his reign.

From that time on, Qingming Day became an important occasion for Chinese people to remember the sacrifices of their ancestors. Later, it became a festival, while Hanshi Day, which was originally on the eve of Qingming Day, was incorporated into the Qingming Festival.

Today, sweeping tombs and graves has remained the most important tradition of the Qingming Festival. People clear away debris and weeds and place offerings to honor their departed relatives. The offerings are usually rice wine, fruit, steamed buns, or the deceased’s favorite foods.

Traditionally, as part of the ceremony, people burn incense and paper articles resembling special items like money or other treasures in hopes that the deceased would not lack any comforts in the afterlife. Today, flowers are often used instead. Prayers are respectfully expressed as well.

In some regions, people place willow branches on their gates and front doors. It’s believed that, if one is kind and upright, the branches drive away evil spirits and invite heavenly blessings of longevity.

Celebrating spring has become an important part of the festival. Many people enjoy hikes and family outings on this occasion. Families often combine their outings with a visit to the tombs or graves of their ancestors.

Kite flying is also popular, all day and into the night. At night, people tie small, colorful lanterns to the kites so that they look like twinkling stars in the sky. Cutting the string and setting the kite free is believed to bring healing and good luck.