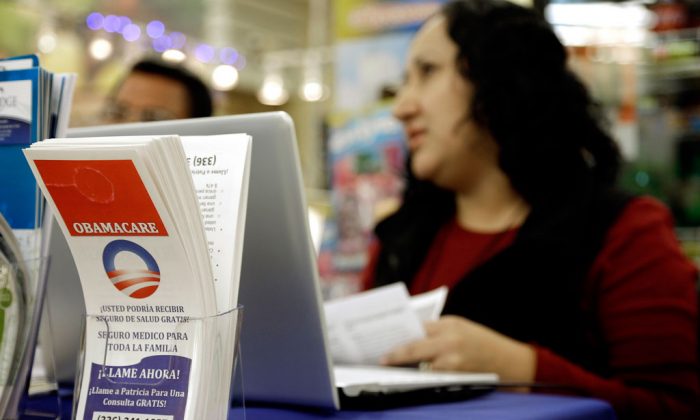 In this photo taken Saturday, Nov. 22, 2014, Blue Bridge Benefits LLC agent Patricia Sarabia helps customers interested in Obama Care at a kiosk at Compare Foods in Winston-Salem, N.C. Such atypical approaches to selling health insurance policies are playing out across the country since the second round of open enrollment under the federal Affordable Care Act opened in mid-November. Insurance companies and some states are focusing heavily on signing up eligible Hispanics, a group that accounts for a large share of the nation's uninsured but largely avoided applying for coverage during the first full year the health care reform law was in effect. Hispanics accounted for just 11 percent of those who enrolled in the private policies sold during the initial sign-up period, which ended in March. (AP Photo/Gerry Broome)
Health

HOUSTON—Individuals looking to purchase health insurance during the ongoing second round of open enrollment under the Affordable Care Act have until Feb. 15 to sign up. But Monday is the deadline for people to sign up if they want insurance coverage to begin Jan. 1.

In Texas — which has the highest uninsured rate in the nation — more than 733,000 individuals selected an insurance plan between Oct. 1, 2013, and March 31 during the first enrollment period. Texas declined to set up its own insurance exchange as Gov. Rick Perry staunchly opposed the Affordable Care Act. The state Legislature also required navigators, those hired to assist people with signing up, to undergo additional training and background checks.

Here are some questions and answers about Monday’s deadline:

Q: What do I need to do to have health insurance starting on Jan. 1?

A: Texas residents need to sign up for health insurance through the federally run online marketplace by Monday. In Texas, community groups, health advocates and insurers say they continue reaching out to residents statewide, promoting the Affordable Care Act through health fairs, pop-up kiosks and one-on-one meetings at health centers and other facilities. Those who sign up after the deadline would not be eligible for coverage until as early as Feb. 1 or as late as March 1.

Porfirio Villarreal, a spokesman for Houston’s health department, said city-employed navigators have been meeting with residents. Many of the questions people have include how to compare different plans on the online marketplace and how they can qualify for subsidies to offset the price of monthly premiums.

Q: What should I do if I already have a plan from the first enrollment period?

A: Residents who already have insurance would not need to do anything as they will likely be automatically reenrolled in their 2014 plan or a similar one. Monday is also the deadline for people with existing coverage to make any changes to their plans so that these changes can take effect Jan. 1.

Q: If I have existing coverage, should I opt for automatic re-enrollment?

A: Health advocates and insurers are advising people to log in to their marketplace account, update their personal information and review all plans available in 2015. They are urging people to carefully review all plans in case better plans are available that might be less expensive or offer additional services. An individual’s current plan might be more expensive next year as some increases in premiums were expected across different health plans.

Dr. Bob Morrow, chief medical officer for Houston and Southeast Texas for Blue Cross and Blue Shield of Texas, the state’s largest health insurer, said people with current plans should get help so they can better understand their options when reenrolling.

“I think it’s important for people to take advantage of the resources we’re putting out there …. so they make sure they get the information they need to sign up for the kind of plan that is the best for them,” said Morrow, whose company is partnering with community groups around the state to reach out to the uninsured through its “Be Covered Texas” campaign.