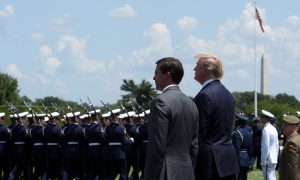 Russia's President Vladimir Putin chairs a meeting with members of the Security Council in Moscow, Russia on Aug. 23, 2019. (Sputnik/Alexey Nikolsky/Kremlin via Reuters)
Europe

The U.S. military on Aug. 18 tested a cruise missile that would have been banned under the Intermediate-Range Nuclear Forces, which the country withdrew from earlier this month over what it described as repeated violations of the treaty by Russia.

“Data collected and lessons learned from this test will inform the Department of Defense’s development of future intermediate-range capabilities,” the department said in a statement.

Putin told his Security Council on Friday that Russia needed to respond, adding that American discussion of deploying missiles in the Asia-Pacific “affects our core interests as it is close to Russia’s borders,” reported Reuters.

Secretary of Defense Mark Esper told reporters recently that the Pentagon wants to deploy missile systems “to the Asia Indo-PACOM theater.” The acronym refers to the United States Indo-Pacific Command.

Putin lamented that the United States was poised to deploy missiles to Romania and Poland.

“All this leaves no doubts that the real intention of the United States [in exiting the treaty] was to … untie its hands to deploy previously banned missiles in different regions of the world,” said Putin.

“We have never wanted, do not want and will not be drawn into a costly, economically destructive arms race. That said, in the light of unfolding circumstances, I’m ordering the Defence Ministry, the Foreign Ministry and other appropriate agencies to analyze the threat to our country posed by U.S. actions, and to take exhaustive measures to prepare a reciprocal response.”

The situation came a day after the United States and Russia clashed at the United Nations.

Russia’s deputy ambassador, Dmitry Polyansky, criticized what he termed as the United States’s “hypocrisy” in testing the missile that would have been banned under the treaty, claiming the United States “consistently and deliberately violated the INF Treaty for some time,” reported Radio Free Europe.

Acting U.S. Ambassador Jonathan Cohen responded by noting Russia violated the treaty years ago while it was still in place, an assertation that has been backed up by the North Atlantic Treaty Organization (NATO).

The United States also requested details on what happened in northern Russia regarding an explosion that left five nuclear engineers dead and caused a spike in radiation in the region. “What system was it, and what purpose does that system serve?” Cohen wondered.

Russia and China called the Security Council meeting after America tested the missile on Sunday. Russia said it wanted to meet regarding “statements by U.S. officials on their plans to develop and deploy medium-range missiles.”

China was asked to join a nuclear treaty by the United States after it left the INF treaty.

Polyansky said that European countries should understand “that because of the U.S.’s geopolitical ambitions we are all one step from an arms race that cannot be controlled or regulated in any way.”

France said that it didn’t want “a new arms race” while Stephen Hickey, Britain’s political coordinator, said Russia’s actions “are in line with a pattern of aggression that represents a clear threat to international peace and security,” undermining its claim “that it is a responsible international partner.”