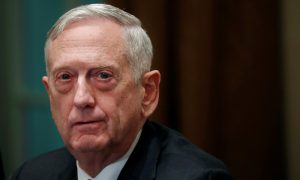 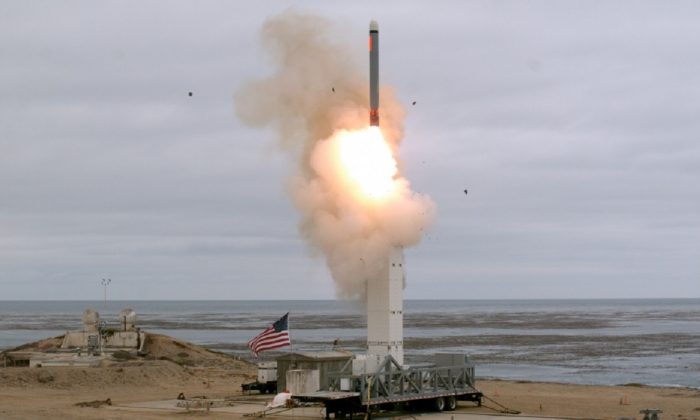 The United States tested an intermediate range missile in California on Aug. 19, 2019. (Defense Department)
US News

US Tests Cruise Missile That Was Banned Under INF Treaty

Ivan Pentchoukov
Ivan has reported for The Epoch Times on a variety of topics since 2011.
View profile
and Zachary Stieber

The United States has tested a medium-range ground-launched cruise missile that would have been banned under a treaty with Russia from which the United States formally withdrew on Aug. 2.

The Intermediate-Range Nuclear Forces (INF) Treaty was signed during the Cold War, but U.S. officials—with backing from the North Atlantic Treaty Organization (NATO)—argued that Russia breached the treaty, refused to correct its actions, and insisted it hadn’t violated the treaty.

“The United States has fully adhered to the INF Treaty for more than 30 years, but we will not remain constrained by its terms while Russia misrepresents its actions,” President Donald Trump said in a statement. “We cannot be the only country in the world unilaterally bound by this treaty, or any other.”

The Department of Defense said Aug. 19 that it conducted a test the day before of “a conventionally-configured ground-launched cruise missile” at San Nicolas Island in California.

“The test missile exited its ground mobile launcher and accurately impacted its target after more than 500 kilometers [about 310 miles] of flight. Data collected and lessons learned from this test will inform the Department of Defense’s development of future intermediate-range capabilities,” it stated.

San Nicolas Island is located some 60 miles from the mainland and the U.S. military has previously tested weapons there, including military research rockets.

Rep. Liz Cheney (R-Wyo.) was among those celebrating the missile test, writing in a statement, “NDAA must fully fund this development activity. Congress can’t allow Russia to gain a military advantage.”

Experts expected the United States to test an intermediate-range missile on the day it formally exited the INF pact, or shortly thereafter.

The heads of the State Department and the Pentagon told reporters that the United States planned to deploy ground-launched missiles to counter the growing number that China has.

Secretary of Defense Mark Esper told reporters earlier in August that the Pentagon’s position is to deploy non-nuclear INF-range missile systems “sooner rather than later.”

“So, the best answer is, sooner rather than later, we want to develop this capability and making sure we can have long-range precision fires, not just for that theater, but for the theater that we’re deploying to as well, because of the importance of great distances we need to cover, and how important an intermediate-range conventional weapon would be to the Asia Indo-PACOM theater,” Esper said.

Esper, in an official statement upon withdrawal from the treaty, said that the Pentagon has been researching and developing intermediate-range cruise and ballistic missiles since 2017.

“Because the United States scrupulously complied with its obligations to the INF Treaty, these programs are in the early stages,” he said.

“Now that we have withdrawn, the Department of Defense will fully pursue the development of these ground-launched conventional missiles as a prudent response to Russia’s actions and as part of the Joint Force’s broader portfolio of conventional strike options.”

Trump said on Aug. 2 that he spoke to Russian President Vladimir Putin and Chinese leader Xi Jinping about a potential deal that involves all three countries.

“With the full support of our NATO Allies, the United States has determined Russia to be in material breach of the treaty, and has subsequently suspended our obligations under the treaty. Over the past six months, the United States provided Russia a final opportunity to correct its noncompliance. As it has for many years, Russia chose to keep its noncompliant missile rather than going back into compliance with its treaty obligations.”

NATO Secretary-General Jens Stoltenberg said in August that a moratorium request from Russia was “not a credible offer” and alleged that Russia keeps building missiles.

“There are no new U.S. missiles, no new NATO missiles in Europe, but there are more and more new Russian missiles,” he said.

Ivan Pentchoukov
Ivan has reported for The Epoch Times on a variety of topics since 2011.
ivanpentchoukovIvanPentchoukov