Former Bank of China Managers Convicted of Racketeering in U. S.
0 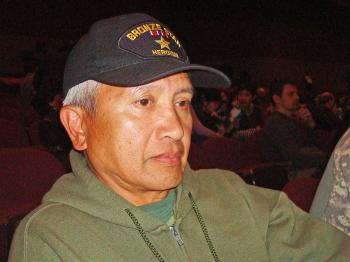 By Epoch Times Staff
Print
SAN JOSE, Calif.—The long-lasting scars of war are ever-present on Vietnam War veteran Alberto Rulloda, who earned the Purple Heart and the Bronze Star while serving in the U.S. Army.

Mr. Rulloda suffers from post-traumatic stress disorder resulting from his experiences at the front lines during the Vietnam war. He attended Shen Yun Performing Arts New York Company's performance at the San Jose Center for Performing Arts with his friend Brian Cornell, an IED specialist, as part of his desire to be more a part of everyday society.

In an interview during intermission, Mr. Rulloda was struck by what he described as Shen Yun's message of peace that transcends borders. He said of the show, “It's an international language of the world, of peace, and that's what we should convey to people, instead of war.”

For Mr. Cornell, The Northeastern Drummers piece stood out. In this piece, young ladies dance with waist drums, which themselves have a history of about a thousand years. He commented that the show reminded him that people throughout the world are not all that different from each other.

On Mr. Rulloda's experience that earned him a Purple Heart:

Thirty miles out of their army base, Mr. Rulloda and two others were driving their jeep when something went terribly wrong. Mr. Rulloda was suddenly launched out of the jeep in a giant explosion, and his two friends were killed due to enemy fire. The enemy was advancing towards Mr. Rulloda, who was left with only a grenade launcher, two straps of grenades, and his automatic rifle.

Mr. Rulloda waited until the enemy closed in and then started firing his grenade launcher and his gun. Then he ran. When he stopped running, he realized that he had taken a gun shot wound to the leg. He was running out of ammunition.

To Mr. Rulloda’s surprise, he had single-handedly wiped out the entire enemy regiment and thus saved his military base from an ambush. After he recovered, he learned that he had been awarded the Purple Heart.