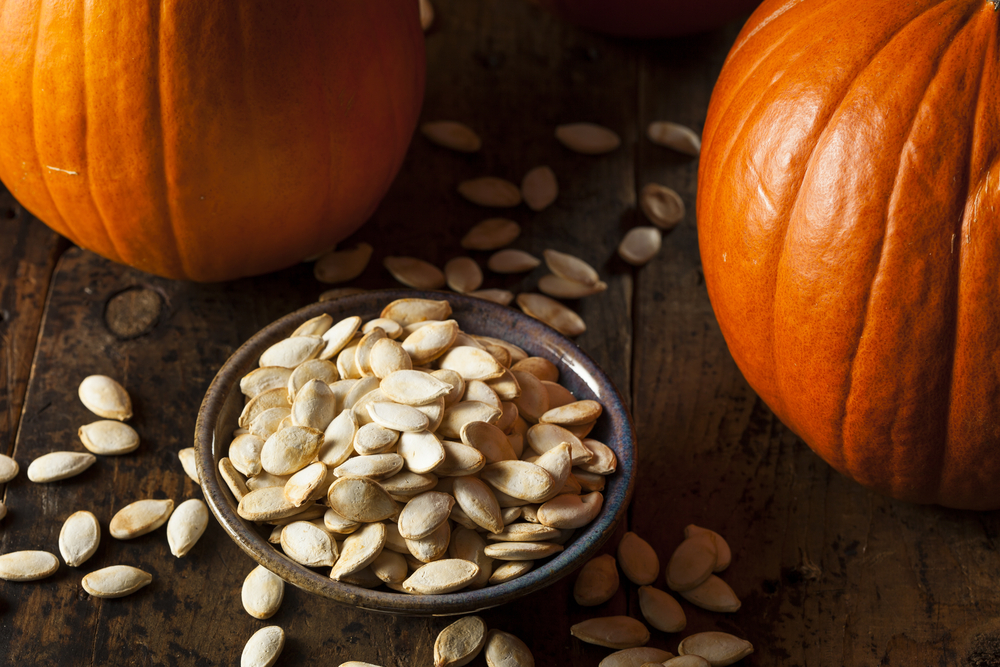 Many kinds of seeds and nuts have health benefits. (ShutterStock)
Nutrition

There’s an old saying: “If you don’t go when you gotta go, by the time you get to go, you’ve already gone!”

Millions of North Americans, if they’ve never heard this expression, know all too well what I’m referring to—urinary incontinence. Now, Japanese researchers claim that pumpkin seeds are the answer to many urinary problems. But who hasn’t carved up pumpkins and tossed the seeds away?

Urinary troubles come in many ways to both men and women. Many women, following childbirth, suffer from weakened pelvic muscles. The complaint is that coughing, sneezing, or even getting up quickly from a chair results in wetting themselves, and they fear becoming a social outcast.

But more people of both sexes are inflicted with OAB (overactive bladder). They seek relief from daytime and nighttime urinary frequency, which becomes more of a problem with advancing age. The result is lack of sleep, depression, and often leakage of urine on their clothes.

It’s estimated that one in six adults over the age of 40 is affected by OAB, and by age 70, it affects 48 percent of women and 17 percent of men.

The cause for older women is often a combination of problems, particularly after menopause. Childbirth sets the stage, with weakened vaginal muscles causing, in time, a falling of the bladder wall. But in addition, a lack of estrogen causes thinning of the bladder lining and thence the urge to void.

For men, urinary incontinence is often associated with enlargement of the prostate gland. Or it may occur following radical prostate surgery or radiation therapy for prostate malignancy. Comments from patients indicate this happens more often than reported because patients who wet themselves are much more aware of this annoyance than the doctor who performed the surgery, and are embarrassed by it.

Conventional medicine can help many female patients by surgery to repair damaged pelvic muscles. Prescription drugs are also available to decrease bladder spasm but are often associated with side effects. In addition, oral estrogen along with vaginal estrogen creams such as Premarin or Vagifem tablets are helpful in building up the bladder lining. Unfortunately, doctors often overlook these helpful remedies.

But what about achieving “ultimate bladder control” by using water-soluble pumpkin seed extract?

In 1578, a European herbal encyclopedia mentioned the use of pumpkins seeds to treat urinary problems. Native American tribes have also used pumpkin seeds for years to facilitate the passage of urine.

By inhibiting the aromatase enzyme, it creates a tissue-building effect on the pelvic floor muscles. It’s believed that this may make more testosterone available to strengthen and build back the urinary tract muscles.

The water-soluble part of the pumpkin seed also binds to the androgen receptor on pelvic muscles cells. This strengthens the female bladder wall to limit the amount of urine left in the bladder after voiding.

Pumpkin seed extract plays another important role in the production of nitric oxide (NO), which has a relaxing effect on both arteries and muscles. This allows for better urinary control. For instance, when the bladder is full, NO is needed to relax the muscles allowing urination. But if NO is in short supply, the bladder becomes hyperactive, resulting in frequent urination.

In males, pumpkin seed extract may not cause a decrease in the size of the prostate gland, but by decreasing inflammation, it improves urinary flow.

Years ago, no one carving a pumpkin would have dreamed that its seeds contained so much power to control bladder problems. But like drugs that decrease pain, any improvement in incontinence, urinary frequency, or a reduced urge to go can make life more livable.