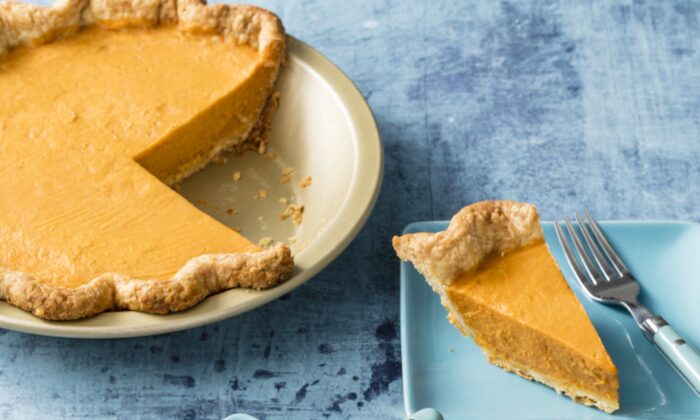 Our version uses a secret ingredient to make the filling smooth and sliceable without baking. (Elle Simone)
Recipes

Most pumpkin pies—like the ones on your Thanksgiving table every year—have fillings that contain pumpkin puree, cream, sugar, spices, and eggs. Because of the eggs, which make the filling nice and thick, these pies need to be baked, often for a long time. In our pumpkin pie, however, we don’t use eggs. Instead, we use gelatin—the same ingredient that is in Jell-O!

And instead of baking our pie, after heating up the gelatin and the pumpkin in the microwave, we chill it. (Well, we still bake the crust by blind-baking the crust by itself; then we chill the baked crust and its nonbaked filling.)

How does that work, you ask? We use gelatin in the filling. Gelatin is a kind of protein. It’s made up of long, thin molecules. When gelatin is mixed with a hot liquid, its molecules are loose and flexible, and they move around a lot—the liquid stays liquid. But when the temperature gets colder, the gelatin molecules slow down and start to get tangled, kind of like earbuds when they’re in your pocket. Eventually, they get so tangled that they trap the liquid inside. The liquid can’t move around or flow: it becomes a solid—in this case, a smooth, sliceable, solid pumpkin pie filling.

A quick tip: You could also use a store-bought pie crust so there is truly no baking involved.

In a medium microwave-safe bowl, whisk cream and gelatin until all the gelatin looks wet (mixture will be slightly lumpy). Let mixture sit for 5 minutes.

Heat the gelatin mixture in the microwave for 1 minute. Whisk until smooth and syrupy. Set aside.

In a large microwave-safe bowl, whisk pumpkin, sugar, maple syrup, salt, cinnamon, nutmeg, and ginger until combined. Heat the pumpkin mixture in the microwave until steaming, about 2 minutes.

Add the gelatin mixture to the pumpkin mixture and carefully whisk until well combined. Use a rubber spatula to scrape the filling into the pre-baked, cooled pie crust. Gently shake the pie so the filling spreads evenly to the edges. Let the pie cool for 10 minutes.

Lightly spray a sheet of plastic wrap with vegetable oil spray. Gently press the greased plastic onto the filling. Refrigerate the pie for at least 4 hours or up to two days. Slice pie into wedges and serve.