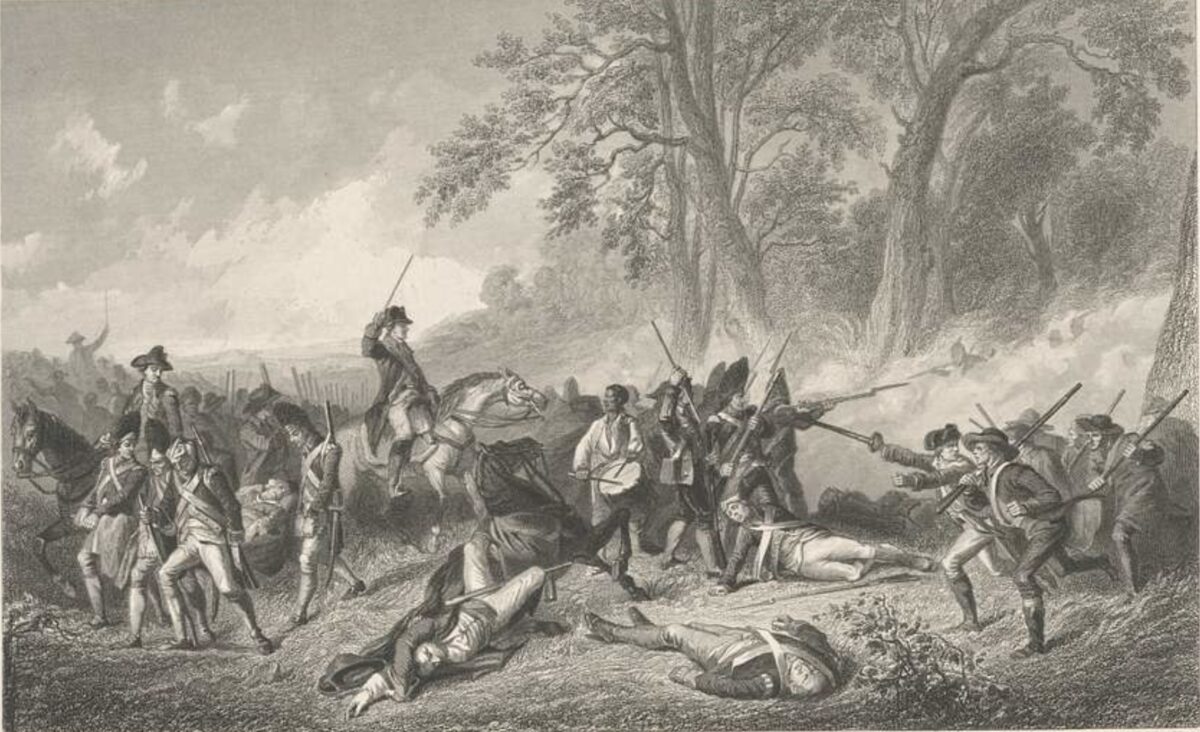 An engraving depicts the fall of General Braddock. It is part of the Emmet Collection of Manuscripts Etc. (New York Public Library)
American Essence

Protected by Providence: Did You Know Young George Washington Once Survived a Rain of Bullets Unscathed?

A young Col. Washington escaped injury while surrounded by the enemy in a 1755 battle in present-day Pennsylvania
BY Andrew Benson Brown TIMEJuly 18, 2022 PRINT

Every schoolchild once knew the story by heart: how a beleaguered George Washington became one of the sole surviving officers in a massacre that killed most of his army, but left him unscathed. How he took command when his general fell, rallied his troops as two horses were shot out from under him, and walked away with four bullet holes in his coat. While a modern reader is likely to think Washington merely lucky, his own account of the event ascribed a very different reason for his continued existence: it was nothing less than destiny.

At only 22, Washington became a distinguished veteran of the French and Indian War’s earliest engagements. His main talent? Surviving a siege by a much larger force at Fort Necessity and living to tell about it. Now a year later in 1755, he joined Gen. Edward Braddock’s newly arrived British army as an aide-de-camp.

In late May, they set out through Ohio Country on a mission to capture Fort Duquesne (where Pittsburgh now stands). Braddock’s campaign was hopeless from the start. His arrogant attitude alienated both the local colonial governments and the Indian tribes, and his knowledge of warfare was based entirely on his experience of European battlefields. Washington recorded his view of Braddock in his diary: “He looks upon the country, I believe, as void of honor or honesty. We frequently have disputes on this head … as he is incapable of … giving up any point he asserts, be it ever so incompatible with reason or common sense.”

Their force dragged wagons and women through the wilderness in a line extending for several miles, “like a thin, long party-colored snake, red, blue, and brown,” as historian Francis Parkman described it in his classic account, “Montcalm and Wolfe.” The terrain worsened, and stalking Indians scalped stragglers. Braddock took Washington’s advice to leave the baggage and push forward with an advance column of 1,300 British regulars and Virginia militiamen. Suffering dysentery, Washington cushioned his saddle to alleviate a case of hemorrhoids, but he could barely ride on account of his fever.

On July 9, they crossed the Monongahela River. While marching through a clearing, they encountered a reconnaissance detachment from Fort Duquesne. The smaller force of 300 French troops and 600 Indians formed a semicircle around the field, used the forest as cover, and started firing. Captain Thomas Gage formed the British vanguard into ranks and returned fire, wasting their volleys on bushes, rocks, and gullies. They loaded cannons and wounded trees. The Virginians ran into the woods to fight at close range as Braddock yelled orders to get back in line. Invisible but for brief puffs of smoke, the unseen Indians made terrifying war whoops as they decimated the British ranks. The regulars mistook the source of some musket smoke and killed many of the militiamen in friendly fire. Faced with a new and savage kind of warfare, they panicked, broke formation, and huddled together in a dense, frightened mass as they were cut down like “sheep before hounds,” as Washington put it.

Gen. Braddock stormed to the front, moving here and there, shouting and swearing. Realizing all was lost, he ordered a retreat just before a bullet pierced his shoulder and entered his lungs. Other officers tried to lead their men in vain, falling one by one. Two of Braddock’s aides were wounded. Only one remained.

Col. Washington charged forward. Riding back and forth to deliver orders, his horse was shot. He mounted another. Musket balls whizzed by his head and caught his flailing coat flaps. Amidst the mayhem, his second horse was hit. He mounted a third and continued rallying troops. An observant soldier later reported, “I expected every moment to see him fall.” Washington attempted to organize the mob fleeing like “wild bears” through the field and across the river. Equipment was abandoned. In the long retreat that followed, he gathered the scattered soldiers, restored discipline, and obtained needed supplies. Braddock died three days after the battle. Washington buried him in the road, flattening his grave with wagons to prevent discovery.

The French and Indians had lost a handful of men. By contrast, Braddock’s force suffered over 900 casualties. Barely 30 Virginians returned from the three companies that had set out. In a twist of historical irony, one of the few surviving officers, Capt. Thomas Gage, would face Washington again 20 years later as the British commander-in-chief during the early months of the Revolution. Another survivor, assigned to watch the horses, was none other than the future pioneer and folk hero Daniel Boone.

Washington’s actions saved Braddock’s entourage from annihilation, and he was lionized as “the hero of the Monongahela.” He had learned that the European methods of waging war were irrelevant in the rugged wilderness conditions of North America. It was a lesson he would soon apply: The following month, he was given command of the newly formed Virginia Regiment. And he had learned something about himself, too. He examined his uniform, tattered but unstained by blood (his own, at least). Taking up a quill, he wrote a letter to his brother John to assure him that “a circumstantial account of my death and dying speech” was exaggerated. Then, he explained his belief for his survival: “By the All-powerful Dispensations of Providence, I have been protected beyond all human probability or expectation; for I had four Bullets through my Coat, and two Horses shot under me; yet escaped unhurt, although Death was leveling my Companions on every side of me!”

Nor was he the only person to see the divine hand at work here. In August of that year, the Reverend Samuel Davies delivered a sermon to a company of colonial volunteers, noting that “God had been pleased to diffuse some sparks of martial fire through our country.” As proof of this assertion, he mentioned “that heroic youth Col. Washington, who I cannot but hope Providence has hitherto preserved in so signal a Manner for some important Service to his Country.”

Textbooks written before the mid-20th century included another story supporting this view. Fifteen years after the Battle of the Monongahela, an old Indian chief who had been there—so the legend goes—sought out the future president. The chief said he had instructed his braves to fire at Washington, but they were unable to hit “the tall and daring warrior.” Their repeated failure could only mean that “a power mightier far than we shielded him from harm,” so the chief told the braves to switch targets. He then bid Washington listen to his prophecy: “The Great Spirit protects that man, and guides his destinies—he will become the chief of nations, and a people yet unborn will hail him as the founder of a mighty empire!”

This story is probably apocryphal (for one, its nameless chief is never identified). Its invention and subsequent exclusion from modern biographies, nevertheless, reveals the changing values behind appraisals of Washington’s life and character. Whether one believes in chance, or in fate, it is hard to resist seeing something extraordinary in the early military career that launched his image as a living legend.