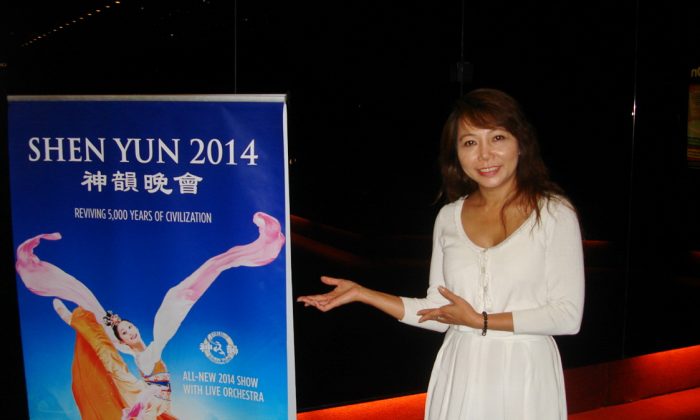 Shen Yun’s performance left Ms. Dang in awe of the dancers, the three solo vocalists and the Shen Yun Orchestra. “I haven’t seen any show like this before. I love it and I will recommend that my friends come,” Ms. Dang said.

“I can’t believe that it’s as wonderful as this. I hope people will come and enjoy it.”

She says she is optimistic about the future of the Chinese people – and her own Vietnamese people—after seeing Shen Yun’s performance.

“I love the hope [the performance gives] for all Chinese, and also the Vietnamese people” who are living under communism, she said.

Vietnam is currently ruled by a central communist government with a capitalist economy—the same method of governance and economic control as those in China.

According to the Shen Yun website, “The Chinese Communist Party has for decades launched various campaigns—most notably the Cultural Revolution—to destroy not only cultural sites, temples, and relics, but also the Chinese people’s belief in virtue and faith in the divine.

“For the Chinese Communist Party removes the cultural essence of respect for the divine, thereby extracting the heart and soul of traditional Chinese culture. Shen Yun seeks to revive these virtues the world over,” it says.

Ms. Dang said her organisation, the Australian Vietnamese Arts Group, was formed five years ago to keep their culture alive in Australia and to pass on their teachings to the younger generations.

“We want to have a brighter future. We want to bring back the culture—the good part,” she said.

Ms. Dang praised the dancers of Shen Yun, saying they were “wonderful”. She enjoyed every aspect of Shen Yun, including the choreography, with its masterful flipping and tumbling dance techniques.

“It’s very artistic and very cultural. [It’s clear] they put in a lot of time practicing,” she said. “I think they did very well.”

‘Fly away into the sky’

Also in the audience for the evening performance was Elizabeth Nguyen, a dancer. She said she had learned a lot from watching Shen Yun’s world class performance of classical Chinese dance.

Ms. Nguyen said the Shen Yun dancers made her “feel very good”, almost as though her soul would fly away. “Fly away into the sky,” she added.

She said she felt “very excited” while watching the performances. “Some scenes made me cry,” she said.