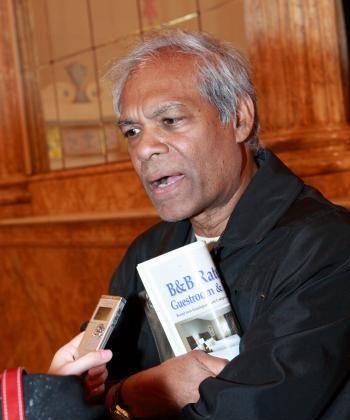 Professor: ‘The most impressive things were the host and hostess’

By Cindy Chan
Print
TORONTO—Abrahim Khan was glad that one of the promoters of Shen Yun convinced him to attend the premier classical Chinese dance and music production at the Canon Theatre this Mother’s Day weekend.

“Fantastic, fabulous, the colours were magnificent, very lively . . . the dancing was very graceful, the choreography, the blending of the music, the different kinds of instruments,” said Prof. Khan, referring to the sets, costumes, and distinctive Shen Yun orchestra that combines traditional Chinese and western classical instruments.

The professor teaches at the University of Toronto’s Faculty of Divinity at Trinity College. He is also Director of the faculty’s Advanced Degree Studies and cross-appointed to the university’s Graduate Centre for the Study of Religion.

Prof. Khan was delighted by the state-of-the-art digital backdrop accompanying each dance and song, often animated to coordinate with the storyline and choreography.

“[It was] marvellous . . . the cinematography that was supposed to be part of the backdrop. It was quite exciting,” he said after watching the opening show on Friday night.

However, “the most impressive things were the host and hostess,” he noted, praising Ben Freed and Yang Song, who with grace and humour introduced the cultural and historical background behind each performance in both Chinese and English.

“I thought they did a marvellous job, very impressive. Their language, their exposition, and their engagement with the audience—I thought that was magnificent the way they did it.”

Not only did Prof. Khan enjoy the beauty of the presentation, he was also moved by the deep meaning underlying the performances.

“They were able to bring together the notion of divine beings in this life,” he said.

New York-based Shen Yun Performing Arts was founded in 2006 by a group of leading Chinese dancers, choreographers, and musicians who endeavoured to foster cultural renewal by reviving the authentic artistic traditions of China that have been all but destroyed under decades of communist rule.

Shen Yun’s performances portray the essence of Chinese arts and culture which are marked by a devotion to virtue, kindness, good character, and a reverence toward the divine.

Prof. Khan singled out the story-based dance titled Splitting the Mountain in which a boy becomes a disciple of a mystical Taoist who bestows him with the powers needed to free his mother, a goddess imprisoned by her brother inside a mountain because she married a mortal.

Noting that the protagonist is “someone who is [both] heavenly and earthly,” he said the dance “touches on the tension of all human beings.”

“That tension tries to capture the attention of every human being’s experiences. It needs not be heavenly directly—it may be tension between cities, cultures, customs. In that sense, I think that part of the story is quite poignant.”

He added that “the show speaks very well of the artistic abilities and the potentialities of the people—immigrants—who come here and weave a life of their own, in terms of not just living day to day, but excelling in their particular area.”

“There are a lot of good things, a lot of positive things in this,” said Prof. Khan, and these themes are not only part of the history of the Chinese people “but also part of the western cultural tradition.”

Shen Yun will return to Toronto in January to present its new 2011 program at the Sony Centre for the Performing Arts.