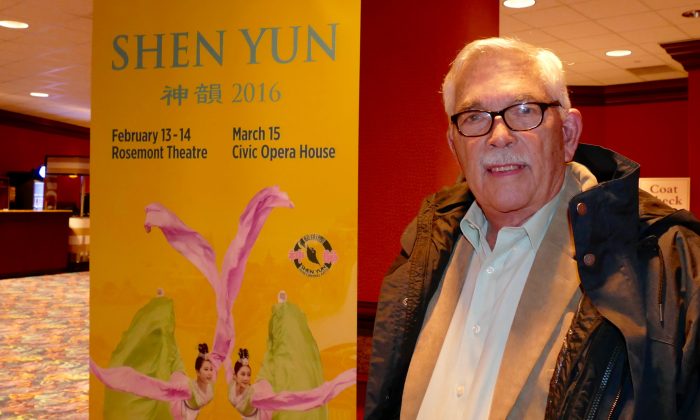 Professor John Dierking was inspired by Shen Yun Performing Arts after seeing it at the Rosemont Theater on Feb. 13, 2016. (Catherine Wen/Epoch Times)
City

ROSEMONT, Ill.—Professor John Dierking came to Shen Yun Performing Arts knowing nothing about the company or performance, and left feeling like he had seen an optimistic future for China.

And that is an important future, as Dr. Dierking is well acquainted with the troubles of the country under the current regime.

As a visual artist and lecturer around the world, Dr. Dierking was invited to speak in communist China once at a political science seminar. He spoke about the Bill of Rights, and of Taiwan’s first democratic elections in China.

During his time abroad he also learned about Falun Gong, a spiritual meditation practice that flourished through word of mouth in China since its introduction in 1992. By 1999, the number of Falun Gong practitioners grew to outnumber the members of the Chinese Communist Party, resulting in the practice being banned.

The practice that taught truthfulness, compassion, and tolerance was good for people’s health, so they did not stop practicing. Overnight, these adherents became criminals, according to the state, and targeted for arrest and persecution.

But the China Dr. Dierking saw on stage at the Rosemont Theatre on Feb. 13 was a picture of what China could, and he thought should, be.

“I found it very inspiring,” he said. As an older man, he wondered whether China’s future would be one of spirituality “that’s recovered from the ancient days.”

The China of an era past was a place where the divine and mankind came together as one. China was known as the Divine Land, and its culture said to be divinely inspired.

It inspired sympathy in Dr. Dierking that people could not have their spiritual beliefs today, but the “sense of freedom that these young people have” in Shen Yun was inspiring. “They’re speaking of their culture [that] they can’t go back to share it with their own people today. Lets just pray that will happen in the future.”

“My heart goes out to all these people,” he said.

The beauty of this ancient culture was wrapped up in visual imagery that was inspiring in its own right for Dr. Dierking, who is also a painter. “It’s very Chinese though, very formal, very ancient.”