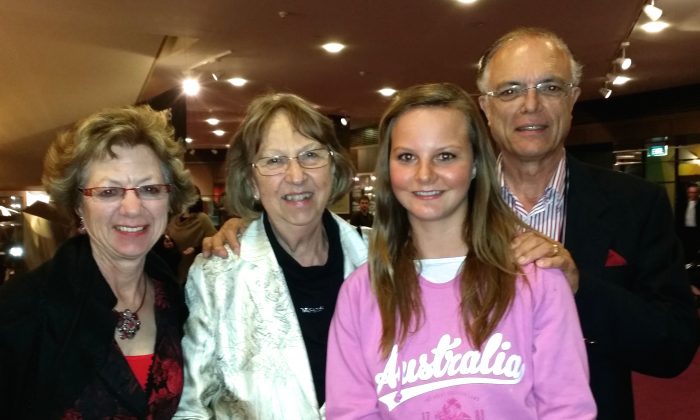 ADELAIDE, Australia—Professor Tony Phillips could not decide what he liked best about the New York-based Shen Yun Performing Arts appearing at the Adelaide Festival Centre over Easter weekend.

The associate professor from Flinders University’s vision science and optometry department was at the performance, April 19, with his wife Susan Phillips, and student Alexandria Castle from Switzerland.

“It’s very, very professional, very slick and the effect of the backdrop is just amazing,” Mr. Phillips said. “I think it’s so clever the way they integrate the cinematography and the dancing, it’s very impressive.”

The Shen Yun website explains, “With state-of-the-art graphics technology, Shen Yun’s digital-backdrop team creates vividly animated settings, extending the stage and transporting the audience to a world where heaven and earth are one.”

“Inspired by 5,000 years of history, these spectacular landscapes truly reflect China’s multifaceted geography, society, regions, and dynasties. Some scenes even transcend this world, entering a heavenly palace where fairies dance amidst mystical clouds or peering into the solemn majesty of a Buddhist paradise.”

Mrs. Phillips was impressed by the backdrops too. “Well, it was amazing! … I like how they got the waves and then people coming out of nowhere and suddenly appearing [on stage]. I don’t know how they do that. I have no idea how they do that, I have not seen it before.”

Alexandria Hassler also delighted in the scenes unfolding on stage.

“It’s wonderful, something I’ve never seen before. It’s great to see another world and they did really good, I really enjoyed it.”