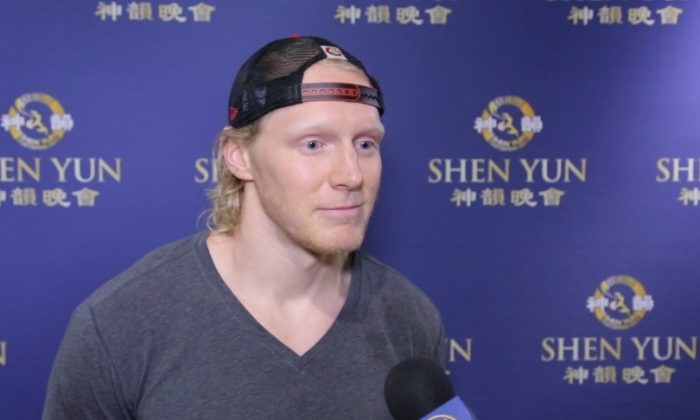 BAKERSFIELD, Calif.—”Absolutely amazing. Shen Yun is saying everything that we need to be hearing and changing the world from both a spiritual standpoint and based around spirituality,” said Jordan Kremyr, a professional ice hockey player, after watching the performance.

He attended the performance with his hockey teammate, Sebastien Sylvestre, to see Shen Yun Performing Arts World Company at the Rabobank Theater on Feb. 26.

Mr. Kremyr, who hails from Canada, is currently playing for the Bakersfield Condors of the East Coast Hockey League (ECHL). He was named captain of the Condors for this year’s season.

He was deeply touched by the profound spirituality of the traditional Chinese culture and the current oppression in China seen in the performance.

“There are terrible atrocities going on in China. They are not allowed to meditate. And we don’t know that information here [in the United States],” said Mr. Kremyr. “They are suppressing Chinese capabilities of meditating, which is the most important quality that anybody is supposed to have.”

“It’s the most basic spiritual right,” he continued. “So we obviously need to make sure there’s a change. And the way to do that is by spreading the message,” which Shen Yun is doing through art and through God, he said.

Mr. Kremyr added, “In helping to effect the change in the entire world, obviously the biggest part is what’s happening all over the world with the suppression, especially in China. We need to come together, help one another, and enrich one another.”

He was referring to the oppression of the spiritual discipline Falun Dafa, which is depicted in two dance pieces, The Power of Compassion and The Divine Renaissance Begins.

Falun Dafa, also known Falun Gong, is a traditional spiritual practice of meditation, exercises, and moral self-improvement that is rooted in ancient Chinese culture. Its core principles are truthfulness, compassion, and forbearance. Practitioners have faced persecution at the hands of the Chinese regime since 1999.

Through over 20 vignettes, audiences are taken on a journey through 5,000 years of Chinese civilization where “mortals and divine beings merge on stage as one,” according to Shen Yun’s website.

Mr. Kremyr was conveyed a deep happiness that the program recognized the existence of God. He described how he felt after seeing the curtain first rise: “Wow, my answer is here. God really does exist. This beauty of God is happening right before you. It’s divine.”

China was once known as the “Divine Land,” with the belief that its rich culture was a gift from the heavens. That culture has been undermined and was almost nearly destroyed by the current communist regime in China, but Shen Yun has taken as its mission the revival of China’s 5,000 years of divinely inspired culture.

Mr. Kremyr was impressed by the spiritual message expressed in the performance. “It’s an amazing message that you can experience something very powerful. Whether it’s the music, the dance, or the [backdrop], it’s a trifecta of beauty,” he said.

The message of compassion in the performance impacted him profoundly, and he wanted to share it with the world’s people. “The fight of good versus evil,” he said, “is something that’s truly inspiring. Hopefully the whole world can hear it.”

Mr. Kremyr was enthralled by all aspects of the performance, particularly classical Chinese dance. “The dance was beautiful. The way they [the dancers] are so in tune. How can they do that, so intertwined, beautifully connected?” he said. “Their athletic abilities are truly inspiring. Obviously they have such supreme power over their minds.”

“Today, Shen Yun’s artists—dancers, musicians, choreographers, composers, and the entire team—follow this noble tradition. For them, this spiritual connection is motivation for striving to excel, is the heart behind each movement of the dancer and each note of the musician. It is why audiences can feel there is something different about Shen Yun. Their source of inspiration, rooted in traditional Chinese culture, is the spiritual discipline known as Falun Dafa,” explains the website.

He said Shen Yun inspired him on different levels: “It’s inspiring to see what you can become, and you want to give it your best, and fight that ego. That was just absolutely phenomenal. Words can’t explain.”

“Hope everybody gets that message to the heart. That’s truly what matters,” he said. “That’s the whole reason. That is going to be the center of it.”