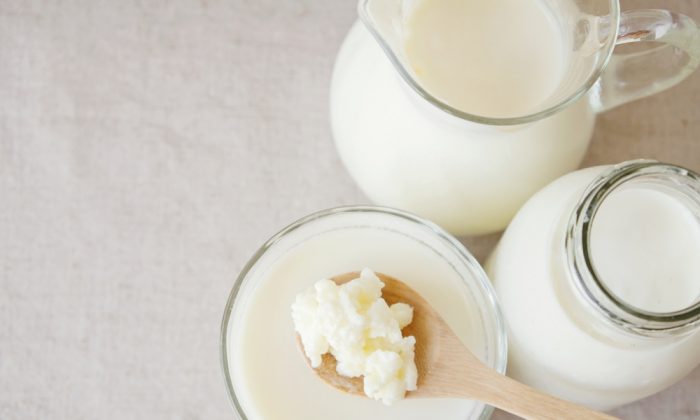 Yoghurt is a form of probiotic. (SewCream/Shutterstock)
Wellness

People treated for depression exhibit greater improvements if probiotics are taken with anti-depressants as compared to only taking anti-depressants, a Swedish study has found.

The study found a greater proportion of depressed and bipolar patients that took both probiotics and anti-depressants—55 percent—entered remission as compared to the 40 percent of patients that only took antidepressants. Probiotics are ingestible products that contain live bacteria beneficial for the body.

Participants that took probiotics daily for 31 days with their anti-depressants had a greater reduction in their depression scores, higher prevalence of healthy bacteria, especially increased proportions of the Lactobacillus genus bacteria.

The genus of bacteria entered the gut microbiome through the probiotic and is also associated with improved mood scores in participants.

The control group of patients that only took anti-depressants also saw improvements in their gut diversity immediately after the study, but they did not gain Lactobacillus genus bacteria. Healthy bacteria such as Prevotella enterotype bacteria, though present at first, was also reduced four weeks after the study whilst bacteria associated with removal of the anti-depressants became more prevalent.

These findings all highlight the benefits that probiotics contribute to gut health and subsequently, mental health.

Further, researchers observed that when exposed to neutral and fearful expressions, the probiotics group had different brain signaling before and after treatment.

As compared to their brain behavior prior to the treatment, signaling in their left and right putamen—a section involved in learning, language functions, reward, cognitive functioning, and addiction—decreased after probiotic intervention.

However, the control group had the same left and right putamen activation both before and after treatment.

Though this signaling pathway is not well understood, the researchers also observed the same patterns in baseline depressed individuals, indicating a possible link between putamen and depression.

Altogether, 47 participants with bipolar and major depressive disorder completed the study with 21 participants in the probiotics group and 26 individuals as control.

“It may be that four weeks of treatment is not long enough and that it takes longer for the new composition of the intestinal flora to stabilize,” said Dr. Anna-Chiara Schaub, one of the lead authors of the study.

Previous studies have linked gut microflora composition with a person’s mood, suggesting a gut-brain axis, speculating that the brain effects the microorganisms in the gut whilst the reverse also happens with gut microbes asserting influence on the brain and its mood.

Anti-depressants reinforce the theory of the gut-brain axis as some anti-depressants can improve mood as well as gut diversity, linking both gut health with mood improvements.

“Although the microbiome-gut-brain axis has been the subject of research for a number of years, the exact mechanisms are yet to be fully clarified,” said Schaub.

The study was published in Translational Psychiatry on June 3, the journal is a peer-reviewed open-access journal.