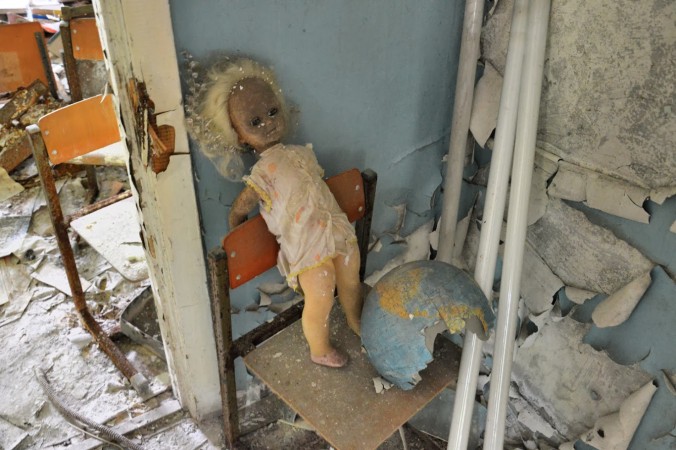 A doll in one of the classrooms in a school in Pripyat (Tomasz Lisowski, www.adventurous-travels.com)
Travel

While watching one of the Hollywood apocalyptic films or playing computer games—have you ever thought that a real ghost town is closer than you think? It is actually located in the center of Europe—in the Ukraine. 110 kilometers (70 miles) from the country’s capital—Kyiv, very close to the border with Belarus. A visit to Pripyat is an extraordinary experience—something you most probably have never seen and will never see. It is completely different from the usual sight seeing tours. In this post I am presenting a gallery of photos of this ghost town literally abandoned overnight thirty years ago.

What Happened in Pripyat

On the April 26, 1986, the world’s worst nuclear disaster occurred. Reactor number four in the power plant near the town of Chernobyl exploded during routine tests. Radioactive particles were fired into the atmosphere contaminating the skies over the former USSR and also the rest of Europe. Pripyat, a few kilometers away, was inhabited by the workers of the Chernobyl Power Plant and their families. All its residents were evacuated overnight leaving most of their belonging behind. At first, they were not aware what had really happened and what horrific consequences the accident had. Some 50 000 people fled Pripyat and around 100 000 the surrounding region. Only few has come back to their fatherland and no one came back to Pripyat.

Is It Safe to Visit Pripyat/Chernobyl?

It is not possible to just drive to Pripyat as you will have to enter the 30 km exclusion zone. You must book, in advance, a special tour from Kyiv (there are many tourist agencies offering trips to Chernobyl/Pripyat). There is only one main drawback to the tour—the price. It ranges from about 150 USD per organized trip to about 450 (!) for a private tour for a single traveler. Another concern you might be thinking of is the radiation. However, the tour guide will not let you enter the dangerous areas and the tour lasts only about a few hours. You would probably receive a higher dose of radiation taking a transatlantic flight. At the end of the tour, every person is checked for radiation levels, and if everything is OK you are free to go. Check wikitravel for more information: WikiTravel.org/en/Pripyat

First impression after entering the exclusion zone is the sensation of emptiness. And, of course, the difference from other places in the Ukraine, full of colors, like: blue waters of the Black Sea in the Crimea, beautiful orthodox churches in Kyiv, old town in Lviv and ancient Roman settlement in Sevastopol. Pripyat seems deprived of colors, like a black and white film. It’s a bit strange because there’s plenty of trees and grasslands around, so green and full of life, especially in the summer. However, you won’t come across any ordinary residents.

Pripyat is completely abandoned and you can clearly see it strolling down the streets of the city. Where there was a swimming pool, now there’s some bushes and the birds building their nests. Chernobyl zone is a perfect example of what would happen if humanity simply disappeared one day. We think we rule this planet but actually we are nothing in comparison to the power of nature. In around thirty years, the buildings started to crumble, the streets to vanish and the once illuminated neon lights—to rust. The branches stick through the broken windows, birds and small mammals have regained their original piece of land that had been taken over by humankind.

Usually, the tour operators don’t allow visitors to enter any of the building because of the danger of collapse. I was really lucky because our guide allowed us to enter a school and a kindergarten. What I saw there cannot be compared with anything what you see outside. Notebooks and personal belongings were still left on the desks, many pipes and metal rods sticking out of the walls, gas masks strewn all over the floor. Totally outlandish sight.

It is a bizarre feeling to experience all this in real life, knowing that this is not a horror movie set but the reality. It is a thing for people who like the different side of traveling, not just pleasant views and beautiful monument. Anyway, it’s an extremely interesting place to see.

Chernobyl/Pripyat in Films and Media

You probably know the zombie movie “Chernobyl Diaries”. If you intend to visit Chernobyl, do watch this movie. Even if it’s not good. Just to see for yourself how different real Pripyat is from the one shown in the film. Everything in this movie is fake. Kyiv turns out to be in Slovakia and Pripyat is an another abandoned town in Easter Europe. To me, real Pripyat was much more terrific than the one presented in Chernobyl Diaries. And don’t worry, there’s no bears nor mutant fish in Chernobyl (although there are some ponds with huge catfish right beside the reactor number 4, I will upload the photos in a future post about the Chernobyl town itself and the power plant).

There are also very nice documentaries on youtube like this one: “Chernobyl—Life in the dead zone” about how the nature is slowly taking over and engulfing the area.