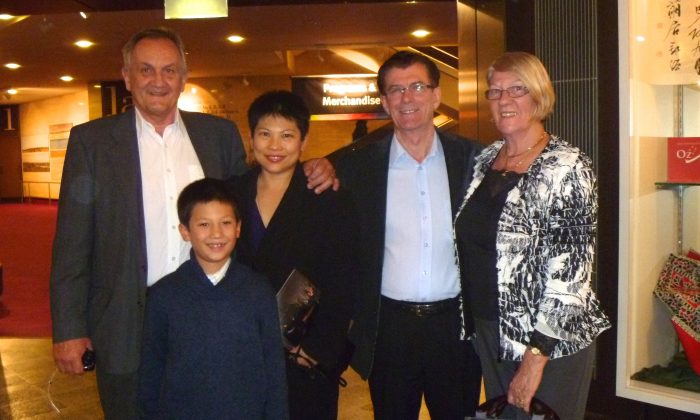 The Borthwick’s currently run a ballroom dancing school after years of medal and showcase dancing. Since 1988 they have won not only State Titles, but also several Interstate Titles as well in many different dance styles including waltz, foxtrot, tango, ballroom, latin and modern.

“It is different, it’s cultural. It is a little different from ballroom but when I watch the movements they are doing on the stage, it is all dance. It is all great,” said Mr. Borthwick.

“There are a lot of movements that people see gymnastically, but it’s not. It is dance and it’s great.”

He noted all the transitions and movements through the feet. “The use of the body to dictate to the feet was great, I was really impressed. … They have got a very smooth movement through the feet.”

According to the company website, “All these jumping, turning, and flipping techniques, along with the exquisiteness of the bearing and form, give classical Chinese dance special expressivity. It is able to transcend ethnic, cultural, and even linguistic barriers, taking this well-established Chinese culture and presenting its essence to the world.”

Mrs. Borthwick said, “beautiful movements and the costumes and the use of the ribbons, that is stunning, I love that. And the way the entire [group] synchronized themselves across the stage. That is hard work to get that to happen.”

“They were great, very together.”

The men had “more masculine type movements” as opposed to the females, who “glide across the floor,” she said.

Mrs. Borthwick appreciated the expression of the story, through the dance. She said, “that was lovely.”

“I was comparing the technique, the Chinese technique of the dance and costumes and everything in comparison to my country. I come from Yugoslavia and I have seen a lot of folk dances from Yugoslavia and from Hungary and they cannot compare they are on level 1 and this is on level 11 out of 10. I have seen many shows back home and they cannot compare, outstanding.”

Dr. Hew said, “It’s all good! It’s inspirational! The movement is very good but, I guess the meaning behind it and also the emotion behind it” is inspirational.

She felt there was a message for humanity “it’s not just about getting power and riches but also what’s behind humanity and what we’re inspiring for.”

“I like the computer generated images coming down on the screen and then the screen comes forward, they fall down, there was no mistake, it was perfect.”

The Borthwicks said they would tell their dance students about Shen Yun and encourage everyone to see it.