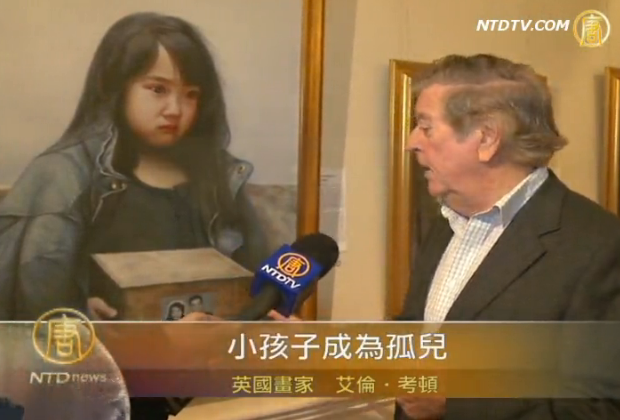 Artist Alan Cotton talks to NTD Television about the painting "An Orphan’s Sorrow" in which a child holds the ashes of her parents. He was Prince Charles's official painter on his tour of New Zealand, Australia, and Fiji in 2005. Mr Cotton spoke to NTD before opening The Art of Zhen Shan Ren International Art Exhibition in Sidmouth in Devon where he lives and works. To see the original interview, click the URL at the bottom of article. NTD can be accessed in a number of languages. (Courtesy of NTD)
Arts & Culture

An artist who has travelled the southern hemisphere with the heir to the British throne opened an international touring exhibition of paintings in his native Devon recently.

The exhibition of realist work depicting aspects of the practice of Falun Gong was opened by Alan Cotton at the Kennaway House in Sidmouth, on the south coast of England, on October 22.

“Most of the paintings in the exhibition speak directly to us,” he said, “in the way that you can see that it is effecting people’s lives in China.”

He said at the Private View, attended by over one hundred and twenty people, “Simply for holding beliefs which are all about humanity, all about tolerance, kindness and love, people are being persecuted.”

The Art of Zhen, Shan, Ren International Art Exhibition is continuously touring the world. Zhen, Shan, Ren translate as Truth, Compassion, and Tolerance and are the core beliefs of the Falun Gong practice. Physically it resembles yoga or tai chi.

After being given prizes by the Chinese Communist Party (CCP) and praised by CCP officials for its health benefits, it has been mercilessly repressed since 1999. Jiang Zemin, who was CCP leader, over-ruled other Politburo members to begin the genocide.

Zemin could not understand why so many people were attracted to the practice, which rejected the material incentives offered by the CCP in favour of what he could not see — insubstantial, spiritual rewards.

For over twelve years, billions of yuan have been wasted on this futile attempt to eradicate the millions of people who practice this peaceful qigong.

In 2006 it came to light that organs from Falun Gong adherents were being sold to order over the internet.

The huge secretive activity of organ harvesting is becoming impossible to hide. There is an eight minute video called Killed for Organs: China’s Secret State Transplant Business gaining thousands of hits on Youtube. [See link at bottom of this article.]

A book called Bloody Harvest: Exposing the organ harvesting of Falun Gong has been in print for a number of years. Authored by human rights lawyer David Matas and David Kilgour, previously Secretary of State for Asia-Pacific in the Canadian Parliament. They refute the CCP’s continuous denials with rigorous reasoning.

Mr Kilgour has remarked “From the 52 kinds of evidence we examined, our finding did not come from any single piece, but from their cumulative effect. Each is verifiable in itself and most are incontestable. In combination, they constitute a damning overall picture of guilt.

A documentary on the wider history of the persecution of Falun Gong called Free China: Courage to Believe has won many prizes. It lasts an hour and has been showing, pre-release, to thousands of invited people around the world. [See URL at the bottom of this article for more information on the film and its awards.] It shows, through the lives of two individuals, how the CCP has used every means to wipe out Falun Gong but that it cannot touch the true hearts of practitioners.

The Art of Zhen, Shan, Ren International Art Exhibition covers this material. Also, in realistic images of the transcendent beliefs of Falun Gong practitioners (higher beings coming to earth, gods guiding people, celestial agents standing their ground in the cataclysmic battle to vanquish evil and restore good) it gives some insight into why practitioners would endure such hardships for so long.

There are many kinds of casualties in this conflict. Mr Cotton mentioned one picture, “An Orphan’s Sorrow” by Xiqing Dong, painted in 2006, which shows a girl with the leather jacket of her father draped over her shoulders, clasping a box containing the ashes of her parents.

Mr Cotton said the little children are often the forgotten people left behind. They lose their homes and carers as, often, their families or neighbours are too afraid to take them in.

The exhibition finished at Kennaway House on October 28. It moves to Cambridge for three days from November 26 and continues in December with a longer run in Bristol (from December 3 – 10).

Mr Cotton travelled with Prince Charles to New Zealand, Australia, and Fiji in 2005 and this year showed images in Messum’s Cork street gallery in London of his part as official painter of a climb up Mount Everest.

The gallery website states, “Using a painting knife exclusively … [H]is soaring views are painted in immediately tangible strokes, using dazzling contrasts of colour and value to share with the viewer the artist’s own ‘gut reaction’ this remarkable landscape and journey.”

From his privations in the Himalayas, Mr Cotton was able to have some insight into the physical side of the situation in China. “I think it’s extraordinary,” he said to one of the exhibition volunteers, “that you’ve brought this exhibition to Sidmouth in Devon so that people here can see what is going on.”

To see the short documentary on organ harvesting in China, click:

For information about screenings of Free China: Courage to Believe, click:

For the original interview with Alan Cotton, see:

With reporting from NTD Television http://ntdtv.org/