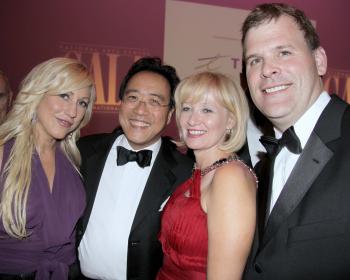 OTTAWA—What a night. The National Arts Centre Orchestra’s annual fundraising gala on Saturday was a sell out and the lineup was superb: the NAC Orchestra, YoYo Ma, Avan Yu, and—wait for it—Prime Minister Stephen Harper and friends.

Twenty-one year old Avan Yu, a graduate of the NAC’s youth program which he entered four years ago, played the first movement of Chopin’s Andante spianato and Grand Polonaise with astounding dexterity and grace for such a young performer.

The notes were doing arabesques around the room as the young pianist played gently but not tentatively, using strong chording when required that wasn’t heavy-handed. His flawless debut with the NAC Orchestra was met with a standing ovation.

Ma and Yu then played the second movement in which Ma was gracious enough to give the younger artist the spotlight, as he assumed the role of accompanist with lots of flair, especially on the pitsicattos.

After a complete drum kit and piano were wheeled out, Harper and three other musicians—two guitar players and a drummer—strode onto the stage. With the PM seated at the piano, the quartet played the Beatles’ With a Little Help From My Friends. Harper did a more than credible job on lead vocals.

The audience was delighted and clapped along with the beat. Harper and friends also received a standing ovation.

The second part of the show was Ma and the NAC Orchestra playing Dvorák’s Concerto in B minor for cello and orchestra, Opus 104. The three-movement piece gave Ma time to shine. Sometimes hugging his cello like it was his child, his expression ranged from rapturous to joyful, to intense, to smiles for conductor Pinchas Zukerman and the principle violinist, Yosuke Kawaski.

Ma was in fine form and the audience was so appreciative that they kept clapping until, after several bows, he finally borrowed Amanda Forsythe’s cello and played a short Bach piece as an encore.

Blumine, the opening piece by the NAC Orchestra, was originally part of Mahler’s First Symphony that was actually composed using some of his previous works. Eventually, the composer removed the Blumine movement and there is some speculation that he perhaps felt it didn’t fit musically with the rest of the symphony.

All monies raised by the gala are used for the National Youth and Education Trust, which includes the visiting ambassadors program of First nations children from Alberta and Saskatchewan.

Laureen Harper, Harper's wife and Honourary Chair for the fourth year, announced that the event had raised $575,000 for the trust.