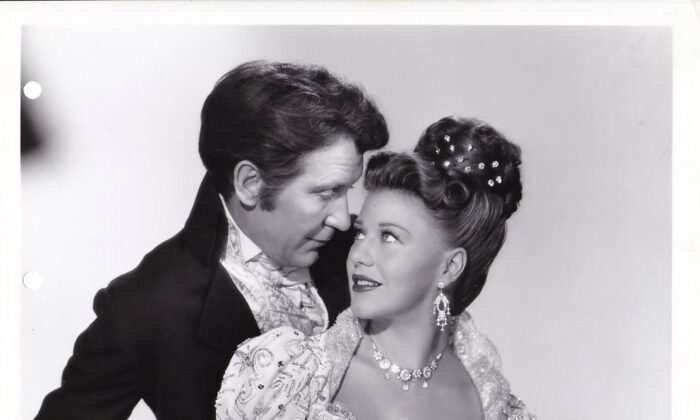 Why are three movies made seven decades ago worth watching? History. American History—a lesson in a system that honors laws that treat all equally.

Although July 4 has passed, it’s always a good time to celebrate American history with inspiring classic films. Hollywood during its Golden Era made many movies about U.S. presidents, using their biographies as the groundwork for inspiring, patriotic stories.

Three excellent classic films about famous U.S. presidents are “Abe Lincoln in Illinois” (1940), “Tennessee Johnson” (1942), and “Magnificent Doll” (1946). The first two deal with Abraham Lincoln’s life and events, although Lincoln is unseen in the second film. The third is set during and after the Revolutionary War. In these films, a total of four U.S. presidents are depicted: Thomas Jefferson, James Madison, Abraham Lincoln, and Andrew Johnson. Made in the 1940s, they reflect the patriotic feelings of World War II as well as the times in which they were set.

“Abe Lincoln in Illinois” begins in 1831, when Abraham Lincoln (Raymond Massey) leaves his backwoods Kentucky home to transport pigs to New Orleans. He becomes a storekeeper in New Salem, Illinois, enjoying lovely Ann Rutledge’s (Mary Howard) company. Abe eventually becomes the local postmaster and runs for State Assembly. He proposes to Ann after her fiancé is gone for two years, but she dies of brain fever before they can marry.

Abe wins his political position and moves to Springfield, where he studies law. There, he meets Mary Todd (Ruth Gordon), who declares that her future husband will become president of the United States. Abe reciprocates her romantic interest but is concerned about her ambitions for him. He breaks their engagement but eventually returns and marries her. As his political career advances, he constantly opposes his old rival for Mary’s hand, Stephen Douglas (Gene Lockhart).

“Tennessee Johnson” also begins in the 1830s, when runaway apprentice Andrew Johnson (Van Heflin) persuades a friendly Tennessee blacksmith to remove his ankle cuff. While Johnson establishes himself as a local tailor, librarian Eliza McCardle (Ruth Hussey) teaches him to read and encourages him to fight for voting rights for non-property owners. They fall in love and marry. His speeches make him unpopular with local authorities, but he responds by running for sheriff. He is elected and begins his political career.

Years later, Johnson refuses to exit Congress with the other Southern senators when the Civil War begins. He fights for the Union and becomes Abraham Lincoln’s vice president in his second term. As Lincoln’s assassination forces him to spearhead postwar reconciliation, Congressman Thaddeus Stevens (Lionel Barrymore) fights to impeach him with powerfully crooked politics.

“Magnificent Doll” begins as the Revolutionary War ends, when Mr. Payne (Robert Barrat) returns to Virginia to sell his plantation and free his slaves. He also promised a dying friend that his daughter, Dolley (Ginger Rogers), would marry his Quaker son, John Todd (Stephen McNally). Dolley reluctantly agrees. Although her resentment toward Todd lessens in time, Dolley only realizes she loves her husband as he dies from yellow fever.

Now widowed, she and her mother (Peggy Wood) start a boarding house in Philadelphia. Their first boarder is Aaron Burr (David Niven), a charismatic congressman who romances Dolley. Another boarder, timid Sen. James Madison (Burgess Meredith), also loves her. Aaron entrances Dolley, but his greedy political ambitions frighten her. Eventually, she realizes she loves James’s unselfish dedication to freedom, while Aaron’s love for her and lust for power grow.

The introduction of “Tennessee Johnson” states, “The form of our medium compels certain dramatic liberties, but the principal facts of Johnson’s own life are based on history,” but this statement applies to all three movies. Each focuses on real historical figures, dramatizing or fabricating relationships rather than inventing fictional characters. This lends authenticity and provides an opportunity for getting to know the central characters. These three films bring the presidents to life.

Americans familiar with the faces of our Founding Fathers will notice that these actors bear faint resemblances to their real-life counterparts, except Raymond Massey. Aided by excellent makeup and flawless mannerisms, Mr. Massey convinces one by the end of the film that he is Honest Abe himself! His wiry frame, chiseled features, and solemn expression convey everything we know from the $5 bill, and more. This film portrays Lincoln not as being refined and confident but, surprisingly, as a man who is sensitive, with insecurities and fears. His droll voice and awkward, lumbering speech make him endearing and very human.

Van Heflin brings a similar sensitivity to Andrew Johnson. Like Lincoln in the previous film, Johnson spends most of his political career declaring himself unfit for positions that others encourage him to pursue. With his fiery temper, he passionately defends freedom and unity. This character transforms from a bitter, self-loathing youth to a confident, selfless patriot when Eliza teaches him that social classes have no place in America. During the Civil War, he stands alone among his fellow Southerners, since he is an American first. He puts aside political differences to join President Lincoln in the fight for the Union’s preservation. The characterization is aided by Heflin’s convincing aging and intensity.

Although “Magnificent Doll” focuses on Dolley Madison, it depicts two U.S. presidents, Thomas Jefferson (Grandon Rhodes) and James Madison. Founding Fathers Jefferson and Madison must fight for the preservation of the fledgling United States. Thomas Jefferson is a smaller character in this story, remaining friendly and honest while striving to fulfill his duty. As the Constitution’s primary author, James Madison would presumably have every confidence in its ideas. However, we see him occasionally falter, wondering if this ideal government can survive. His wise wife’s love and support encourages him to keep defending freedom.

The often-comical Burgess Meredith plays against type as the very serious but likeable Madison. For example, his explanation of America’s fight for freedom to Dolley in the empty Senate is one of the most inspiringly patriotic speeches in Hollywood history.

When enemies of freedom arise, it’s tempting to grab a musket or look for the nearest hanging tree. However, these films remind us that America cannot be defended by breaking our laws, even for a good cause.

In “Tennessee Johnson,” young Andrew Johnson’s speeches about equal voting rights lead to a fight and his friend’s death. When his comrades want to form a mob and hang the murderous sheriff, Andrew explains that violence will only cause more death: “Mob fighting, shooting, and hanging, and burning, that ain’t the way! … Yes, I tell you to fight for your rights. But the Constitution ain’t for the dead. It’s to protect the living! … It says the people got the right to make the laws! … And that’s how we’re going to win our fight election day!”

Similarly, a mob wants to hang Aaron Burr after he is acquitted of treason at the end of “Magnificent Doll.” Dolley uses all her persuasiveness to make the angry people realize that they will be killing more than one man if they hang Burr: “This is not freedom! … Freedom is something you live, under law. … You and I must live the example of a free people. We must prove … that with clean hands and united hearts, we are able to deal with traitors as a people, under law and with order.” This reflects America’s history of putting fair laws above emotional reactions, a heritage of which we can be proud.

Let us find inspiration for guarding our freedom during the most trying times from the great leaders of the past. In a short, brilliant speech, Abraham Lincoln (Raymond Massey) says: “I don’t think we want to be [the terror of the world.] I think we would prefer to be the encouragement of the world. The proof that at last man is worthy to be free. But we shall provide no such encouragement unless we can establish our ability as a nation to live and grow, and we shall surely do neither if these States fail to remain united. … A house divided against itself cannot stand!”

These movies have gained greater value as they’ve aged. Instead of reacting with despair and un-American violence to the trials of political unrest, we can remember these movies, which remind us that the only way to save our country is by fighting for and not against our laws. As Dolley Madison poignantly says: “When you made those laws, you agreed to live by them and obey them. If they’re not strong enough to protect you, strengthen them in orderly processes. But never take them into your own hands in mobs like this. This is not freedom!”