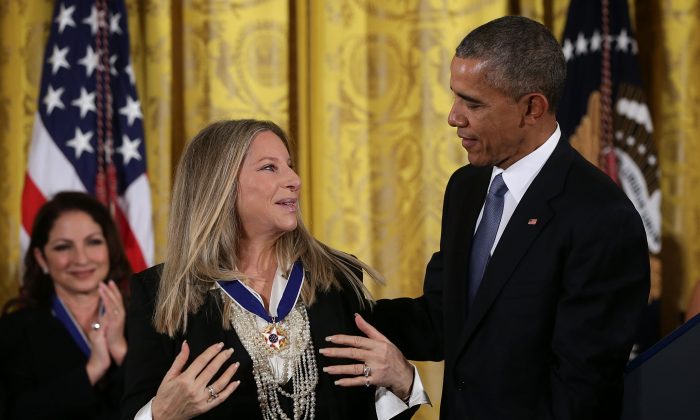 Lots of excitement Tuesday afternoon at The White House as the Who’s Who of the world of  music, film, baseball, world peace, and culture were honored by President Barack Obama and the first lady Michelle Obama with the 2015 Presidential Medal of Freedom, the nation’s highest civilian honor.

Presented annually to individuals who have made especially meritorious contributions to the security or national interests of the United States, the seventeen honorees were feted with standing ovations and exceptionally prolonged applause in the filled-to-the-capacity legendary East Room of The White House.

Taking the time out of his very hectic schedule handling the crisis situations in Europe, President Obama welcomed the recipients and their families for this very special celebration of exceptional innovators, artists, and leaders. “This is an extraordinary group.  Even by the standards of Medal of Freedom recipients, this is a class act,” Obama said as he was about to introduce the honorees.

“We are just reminded when we see these individuals here on the stage what an incredible tapestry this country is and what a great blessing to be in a nation where individuals as diverse, from as wildly different backgrounds, can help to shape our dreams, how we live together, help define justice and freedom and love.  They represent what’s best in us, and we are very, very proud to be able to celebrate them here today,” Obama said.

And just like the very gracious hosts as they are, President Obama and The First Lady, invited their honored guests for a tasting of the culinary creations prepared by the White House gourmet chefs: “My understanding is also there’s pretty good food in the White House, so please enjoy the reception. And congratulations to all the recipients.  Thank you very much, everybody,” concluded the President.

Just one more very busy day in life at the White House. “But this is a fun kind of busy right here,” the President said.