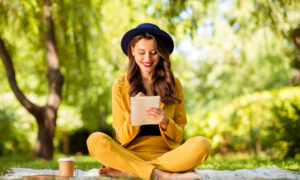 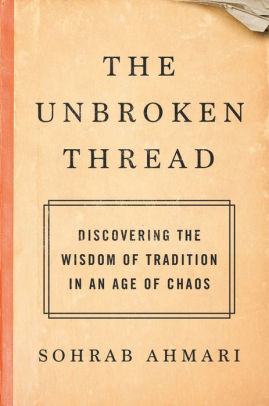 "The Unbroken Thread: Discovering the Wisdom of Tradition in an Age of Chaos" by Sohrab Ahmari (Convergent Books, 2021)
Literature

‘Preserve the Thread of Tradition, My Son’

Sohrab Ahmari’s new book, “The Unbroken Thread,” follows his acclaimed spiritual memoir, “From Fire by Water,” in which the Iranian American journalist had charted the story of his conversion to Catholicism.

This book is less personal and more ambitious, laying out an argument that we need to rediscover the traditions that have been swept away by the enhanced focus on individual autonomy and social liberation that has become so prevalent in recent times.

In diagnosing what he feels is our civilization’s main malady, Ahmari, opinion editor of the New York Post, speaks from experience.

As readers of his previous work will know, Ahmari didn’t convert to Christianity from Islam. Having been raised in a highly Westernized family that fled the Ayatollah’s Iran, the young immigrant embraced a hedonistic lifestyle with a passion and felt appalled that others around the world were denied such freedom.

Years on, Ahmari has scaled the heights of journalism on both sides of the Atlantic and now enjoys a comfortable life in Manhattan. He is, by any definition, an example of a successful immigrant to the West.

But as a Catholic and a father of a young son, he is disturbed by what he sees around him and fearful about the world which his little boy will inherit. He writes:

“I have come to believe that the very modes of life and thinking that strike most people in the West as antiquated or ‘limiting’ can liberate us, while the Western dream of autonomy and choice without limits is, in fact, a prison; that the quest to define ourselves on our own is a kind of El Dorado, driving to madness the many who seek after it; that for our best, highest selves to soar, other parts of us must be tied down, enclosed, limited, bound.”

His son Maximilian looms large in this book, as does Saint Maximilian Kolbe, who died a martyr in Auschwitz.

Ahmari writes that Kolbe’s act of self-sacrifice in volunteering to die in the place of a stranger represents the climbing of “the very summit of human freedom,” and argues that “we have abandoned Kolbe’s brand of freedom—freedom rooted in self-surrender, sustained by the authority of tradition and religion—in favor of one that glories in the individual will.”

Surveying the landscape of contemporary society, the author fears that his son will discard the “permanent ideals” of the past in favor of a culture that prefers the new to the old, and which suggests that there is no purpose to life other than self-fulfillment.

This book—the final chapter of which is a touching letter addressed from father to son—is an attempt to explain the unbroken thread which connects us to the past.

Ahmari’s structural approach is reminiscent of Jordan Peterson’s. He divides the book into 12 sections, each of which is based on answering a particular question: Is God Reasonable? Can You Be Spiritual Without Being Religious? What Is Freedom For?

Like Peterson, Ahmari is a gifted storyteller and is refreshingly broad-minded when it comes to the examples he explores from a range of religious and cultural traditions.

In one chapter, he describes how C.S. Lewis came to abandon the shallow and materialistic worldview that he and others had developed in the early 20th century, and how this renewed respect for the old helped Lewis not just to explore this world, but to reconsider the Christian faith he had abandoned.

When explaining the relationship between faith and reason, Ahmari describes how Plato and Aristotle had, through the use of reason and without revelation, concluded that God must exist.

Elsewhere, in discussing the value of the Sabbatical rest and the costs which society has borne as a result of our collective decision to dispense with it, he highlights the work of the rabbi Abraham Heschel, who believed that by honoring the Sabbath, people weren’t only reminded of their basic religious duties, but also helped to understand their task “to restore the world to the kingship of the Lord.”

Many prominent books about modern American life have touched upon what is surely the most consequential change to occur there in recent times: the rapid secularization of the population.

This usually involves a movement away from traditional religion toward an individual-centric form of vague spirituality, and Ahmari argues persuasively that the baleful effects of this shift can be seen throughout society, including the rise of identity politics and the ever-greater social division that it’s causing.

It’s worth noting that the author has recently undergone more than religious conversion. In addition to this, he has become an increasingly vocal critic of the traditional fusionist approach of right-of-center Americans, which saw social conservatives work together with libertarian-leaning economic conservatives to advance their goals within the framework of the American political system.

In 2019, Ahmari launched a blistering attack on this approach in the pages of First Things, and he has since become associated with the quixotic integralist position, which favors a more aggressive approach in culture war issues, and which seeks to do the impossible in marrying Church and State at a time of accelerating secularization.

It would take another (very long) book to chart a path toward the society he and the other integralists seem to be aspiring towards, but few conservative-minded readers would disagree with his basic contention that the existing “American order enshrines very few substantive ideals I would want to transit to my son.”

Those substantive ideals are there, surely, and in this book, Sohrab Ahmari has done an excellent job of explaining to his son and anyone else who cares to listen why the thread that binds us to the past must always be preserved with reverence.

“The Unbroken Thread: Discovering the Wisdom of Tradition in an Age of Chaos”
Sohrab Ahmari
Convergent Books, 2021, 322 pages

James Bradshaw works for an international consulting firm based in Dublin, and has a background in journalism and public policy. Outside of work, he writes for a number of publications, on topics including politics, history, culture, film, and literature. This article was originally published on MercatorNet.

America’s Veterans Are Killing Themselves at an Alarming Rate: Report
0