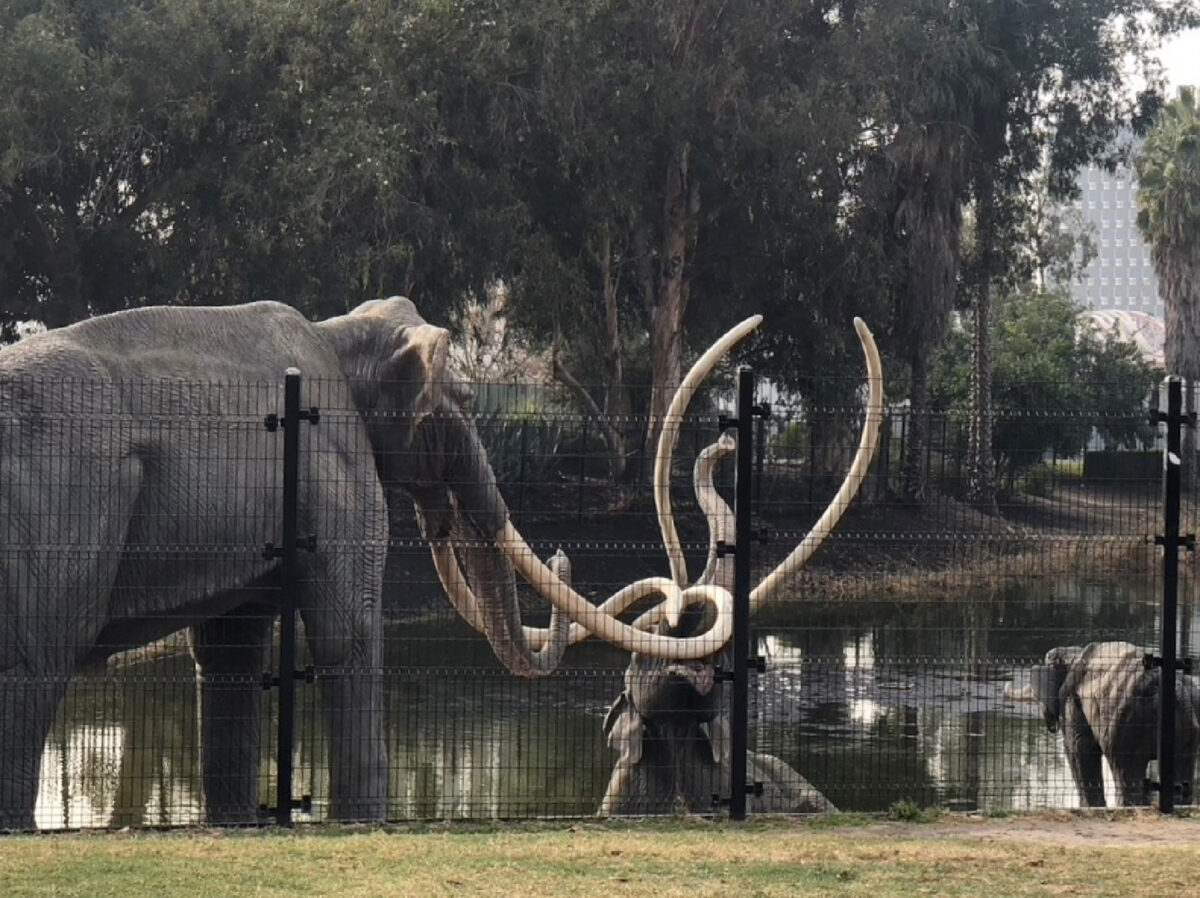 Prehistoric Creatures Rule in the Middle of Los Angeles

In the heart of Los Angeles, we discovered an area that was inhabited for thousands of years before the arrival of humans: the La Brea Tar Pits and Museum. From viewing the exhibits and reading the signs at each one we learned so much about the natural history of this area.

In the late 1800s a series of tar pits there was mined for the naturally sticky tar used to make asphalt for sealing roofs and making roads. Along the way, miners made some remarkable discoveries. Today you can see small lakes of accumulated rainwater in the depressions where tar was removed. Oil still deep below the surface causes some of them to have a sheen, and in places tar bubbles and has an offensive odor.

In ancient times this was all one large lake where many species of indigenous animals came to drink, unaware that the ground below the water was dangerous. Their hooves and feet sank into the soft muck and became irretrievably stuck. Unable to move from the goo, many animals became trapped and died.

In this vast and lovely park, a statue of a huge elephant first attracted our attention, and there we found a small lake behind a fence. The sign indicated it was the first of these tar pits in which a fossil that turned out to be from a saber-toothed cat was discovered. By the 1900s fossil-digging had begun in earnest.

From the jumble of ancient relics found in each tar pit, scientists learned that huge animals roamed this area. The bones were traced to Columbian mammoths, enormous Harlan’s ground sloths, dire wolves, saber-toothed cats, coyotes, mastodons and more large mammals as well as many smaller animals and birds.

In 1914 digging at what was called Pit 9 revealed more than 10,000 bones from various animals that also included short-faced bears, camels and horses. Workers dug down to more than 35 feet and found bones jumbled together. The bones of 27 individual mammoths revealed that animals died in this pit over a period of many years.

Many of the larger animals that were stuck in the tar were attacked by smaller carnivores that seemed more able to escape the muck. Often, they tore off a limb of the victim and took it for a feast away from the watery danger.

Fossil-digging continues today. Crates of fossils are numbered to indicate which pit yielded the evidence. Then they are taken to onsite labs for testing and study. Pit 23, now under examination, has yielded artifacts that range from giant mammoth tusks to the toes of mice. No treasure is too small or too large, and these investigations help scientists to know what life was like here during the ice age. Some of the research stations are protected under tents near the digs, and a few of the small lakes are not enclosed, but we did not dare touch that area.

Inside the museum enormous fossil skeletons put together from discoveries made in the pits suggest what life on earth was like when these animals roamed. You can watch scientists in the lab clean and test newly found fossils, and you can also watch — and perhaps help out with — the digs. Or test your strength at a simulator to see if you would have been able to pull yourself out of the tar.

WHEN YOU GO
Several museums are clustered around the tar pits. Park your car once and enjoy the Academy Museum of Motion Pictures, the Los Angeles County Museum of Art and others while you’re in the area.
www.tarpits.org
www.academymuseum.org/en
www.lacma.org