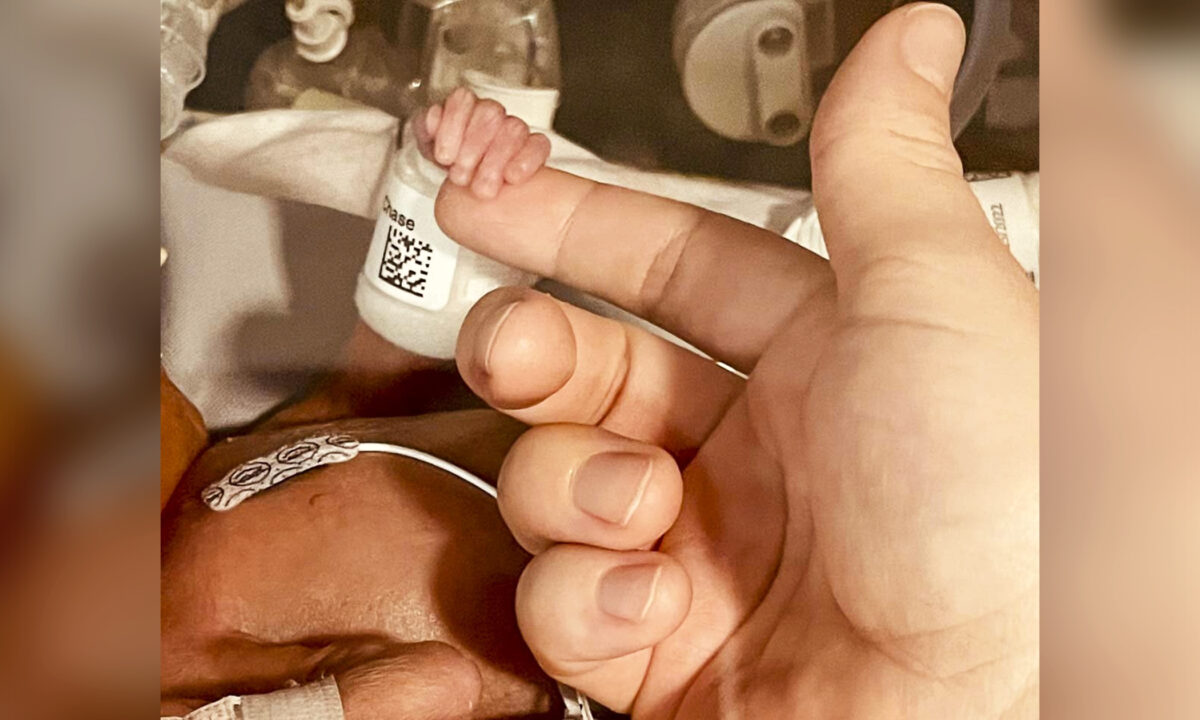 A baby boy who passed away at 21 days old saved his sister and mother after pushing to be delivered at 24 weeks. Now his twin is healthy and thriving.

Mom Breanna Seibel, 29, who is studying for a master’s degree in nursing in Wisconsin, believes her son, Teddy, saved her life and that of his sister, Vivi, now nine months old, after doctors were forced to deliver the babies early.

“Teddy saved his sister’s life,” Breanna said. “Doctors told us that if I hadn’t given birth when I did the chances are all three of us wouldn’t have made it. His head was right at the birth canal pushing to come out—like he was trying to warn us.”

The twins were born 14 weeks early, via emergency C-section on April 23 last year, with Teddy arriving at 4.30 p.m. weighing 1 pound 7 ounces and Vivi at 4.31 p.m. at 1 pound 6 ounces. Both babies were whisked to the neonatal unit at United Hospital, St. Paul, Minnesota, with brain bleeds and had to be monitored around the clock.

Teddy had been looking healthier out of the two until he took a sudden turn for the worst and died in his mother’s arms on May 14 from a brainstem herniation, as a result of the bleed.

“Losing Teddy was horrific, and he passed away in my arms,” Breanna said.

Breanna and her husband, Chase, 31, chose to lay Teddy next to his sister Vivi. The parents say Vivi’s stats increased as soon as they did that. Little Vivi battled a hemorrhage, bleeds, and double lung pneumonia before finally coming home after 101 days in hospital in August last year. She is now hitting all her developmental milestones.

“When we wrapped Teddy up and brought him in to meet his sister her stats increased, and she started to improve,” the mom said. “She’s a miracle. It’s remarkable from what she came from.

“She inspires me so much.”

Breanna and Chase had been delighted to find out they were expecting twins in December 2021. Breanna’s pregnancy had been going smoothly until she started to experience back pain at 23 weeks and three days.

“It just felt different to me,” she said. “They checked me and found I was already a centimeter dilated. I started having contractions seven minutes apart and then three minutes apart.”

Breanna was given steroid treatment to try and slow her labor and was transferred to United Hospital, St. Paul, Minnesota. Her labor slowed, and doctors aimed to get her as far along as possible before delivering the twins. Breanna managed to get to 24 weeks and one day before doctors had to perform an emergency C-section after the mom-to-be started profusely bleeding at 7 cm dilated.

“The babies were so small they could fall out of me,” Breanna said. “Teddy’s head was in the birth canal ready to come out.”

During the C-section, doctors realized that the mother and the twins may not have made it after seeing that Breanna’s placenta had shredded from a placental abruption. Breanna wasn’t able to see her twins until later that day but made sure her husband stayed with them until she was able to join them.

“It was numbing seeing them,” she said. “Their brains were as thin as tissue paper. They both had brain bleeds.”

The siblings were in separate rooms as there was no twin room available, and mom and dad took turns going between the rooms. “It was so up and down,” Breanna said. “I would go to the bathroom and come back and one of the babies was being resuscitated.”

Teddy unexpectedly started to go downhill after his head started to increase in circumference from the pressure build-up from his brain bleed. The family was told to say their goodbyes. Gradually, his breathing slowed down, and he passed away in his mom’s arms.

Despite their loss, the parents tried to stay strong for their daughter Vivi, who still had a long way to go. Miraculously, she was able to leave hospital and head home, on oxygen, on Aug. 2 last year—just nine days before their due date.

“We were told it would be a miracle if she wasn’t hospitalized,” Breanna said. “We are blessed that she is doing as well as she is. Teddy is a big part in Vivi getting better. Teddy died so Vivi could live.”

Now Vivi weighs a healthy 13 pounds 6 ounces and wears three to six-month-old clothing. The family hopes to hold a memorial this year for Teddy and have pictures up of him around the house so Vivi knows who her brother is.

“I want to give other 24-week parents hope,” Breanna said. “You will get through it.”