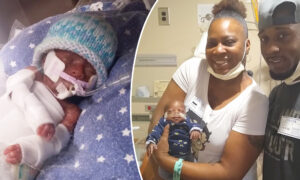 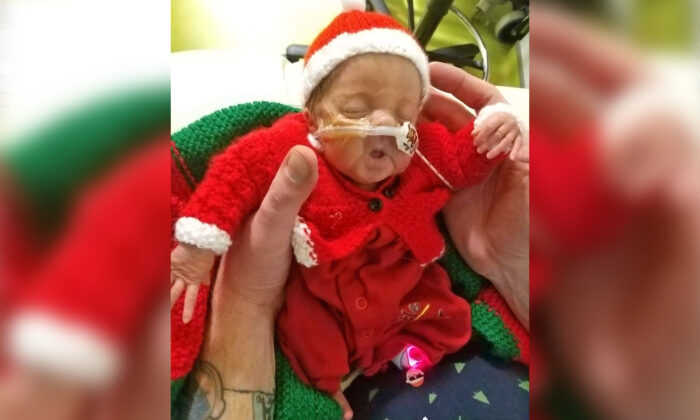 The baby is now thriving, and her family is excited to celebrate the 2020 Christmas at home.
By Caters News Agency
biggersmaller
Print

British Parents who were told every day for four weeks that their preemie daughter was not going to survive prepare to celebrate the 2020 Christmas with their now 1-year-old bundle of joy.

Parents Emma Griffin, 42, from Droitwich in Worcestershire, and Scott Woodland, say that they are on top of the world as they get ready to celebrate the significant milestone in their baby daughter’s life journey. Little Iris, who was born 12 weeks early, was not expected to survive by medics.

After five grueling months in hospital, the grateful parents were able to take their baby daughter home in April this year.

Emma gave birth to Iris on Nov. 21, 2019, at 28 weeks pregnant as a result of placenta abruption, a condition that arises when the placenta comes away from the uterus and deprives the baby of oxygen and nutrients, leading to premature labor.

The brave baby Iris turned 1 recently, and her parents couldn’t be more proud of her.

“I thought I was prepared for the neonatal journey as I have been through a premature birth before, but I was not. It has been the longest and toughest journey ever,” Emma said. “We were heartbroken when we heard the words ‘she will not survive’ come out of the doctors’ mouth.”

The mother said that Iris had an extremely bad infection that her doctors “could not get control of.”

“All that they told us every day for four weeks was that she was going to die. I was so devastated hearing the same thing from the doctors. It felt like they had given up all hope,” she said.

Emma said: “I tried to not build myself up too much and prepared myself for the worst, but at the same time we held on to any glimmer of hope. All we wanted was to take our baby home and be given the chance to parent together.

“We could not sleep or eat, and spent most nights crying and dreading that the phone was going to ring.

“My pregnancy with Iris was labeled as high risk, because unfortunately, in February last year I gave birth to my son, Monty, at 29 weeks. He only survived for 57 minutes as he suffered from hydrops—an accumulation of fluid in at least two fetal compartments. ”

The couple then spent six days in the bereavement suit with their late baby son.

Emma said she and Scott have children from their previous relationships, and Monty was their first baby together.

“We were desperate to have a child, so we started trying again pretty quick because of our ages. We felt like time was against us,” she said.

“By May the same year, I had fallen pregnant again,” she said. “Because of what had happened in my previous pregnancy, I was kept under a close eye to make sure everything was fine.”

However, Emma said that during a private gender scan, the medics discovered that baby Iris had “some fluid around her lungs,” and they went for weekly scans to keep track of the amount of fluid.

Emma recalled: “The fluid levels kept increasing and it kept having to be drained. At 27 weeks the level of fluid was so high that it was squashing her lungs, the doctors told me I might need to have a shunt to keep draining the fluid.

“However, I woke up the next day and started having contractions and my waters broke. I had to have an emergency C-section, within an hour and a half Iris was born.

“Her lungs had collapsed and she needed to be taken to the Birmingham Women’s Hospital Neonatal Intensive Care Unit. When we arrived, all the doctors kept saying to us was that she was extremely sick and that they were doing all they could but it was touch and go.”

Brave Iris faced many challenges during the first few months of her life. When she was 2 weeks old, she suffered pneumonia and managed to overcome it. Over the next few weeks, things seemed to be getting better, and it appeared as though Iris was getting stronger; she was no longer in an incubator.

Emma said that on the evening of Christmas day last year, they left Iris at the hospital thinking everything was fine.

However, on the morning of Boxing Day, the couple received a call that Iris’s state had severely deteriorated. They were told that as Iris was struggling to breathe, she was re-incubated in intensive care.

“The doctors found that Iris had an infection, they put her on anti-biotics but they could not get on top of it. Her infection markers were 500, and they should be at one,” Emma said.

“This is when we really thought we were going to lose our baby. Every morning when we went to the hospital we were greeted with the doctors explaining to us that Iris was not going to get through this,” she recalled.

“One day the doctors gathered to discuss whether they were going to withdraw her treatment. My heart sank, I was absolutely terrified.”

Luckily, the doctors decided to continue with the treatment, said Emma. However, they had decided that if Iris’s heart stopped working, they would not resuscitate her.

Emma said: “So, a DNR—do not resuscitate—was placed on her. I was heartbroken, I could not bear to lose another child. I just kept hoping that she was going to be okay. After another week of treatment, Iris seemed to be slightly better and the DNR was removed.”

But merely five days later, the baby’s heart stopped and she needed to be resuscitated.

“The doctors were clutching at straws, they had tried everything to get on top of the infection but they could not. They kept telling me I was not going to get my baby back,” the mom said.

In February, medics discovered an abdominal mass, which turned out to be sepsis and was the cause of the serious infection. After further treatment, Iris responded well and seemed to be getting better. She was then extubated once again. However, in March, further complications appeared after Iris was given immunizations, and she had to be incubated again in NICU.

Over the next few weeks, things began to improve once again. Emma says that two days after the country went into lockdown, they were able to take Iris home, where she was having full feeds and was on a low flow of oxygen.

Emma added: “This did not last long. During Easter weekend Iris started struggling with her breathing and flopped in my arms. I called 999 and we were blue lighted to the hospital. In the ambulance, she went into cardiac arrest.

“She had to be incubated once again and we spent a further 10 days in the hospital while she was being treated for a respiratory virus until she had got strong enough to return home.”

Iris has been home with her family since the end of April despite being born last November.

“We are so unbelievably proud of Iris,” Emma said. “She has been weaned off of her oxygen and she is doing things the doctors told us she would never be able to do.

“She is rolling around and trying to stand, and she has said ‘Dada.’ I do not think she will have a problem with walking. She is amazingly strong and we are so grateful to have her home […] It has been a roller-coaster,” Emma said.

“Although there is still a massive hole left by Monty that will never be filled, we are thankful for where we are today,” she added.