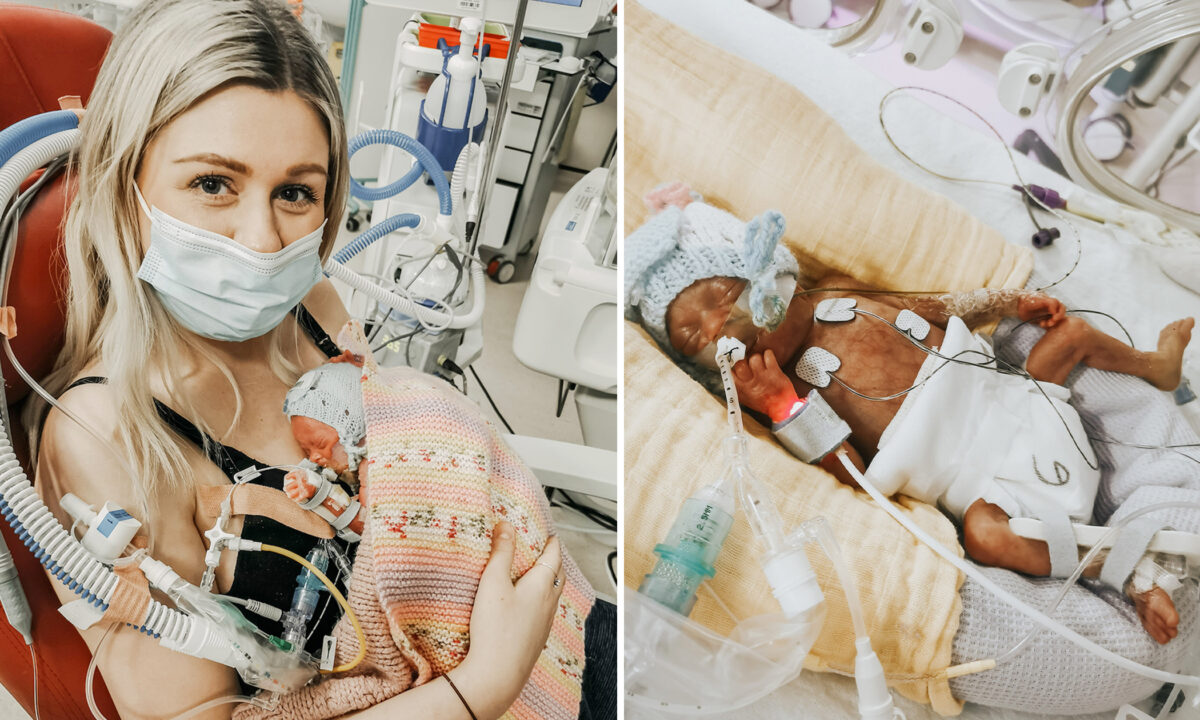 An extremely premature baby that was born at 23 weeks and 4 days—just three days before the legal abortion limit in the United Kingdom—was saved by her mother’s cuddles.

When Elsie Dutton was born on Dec. 2, 2021, weighing 1 pound 2 ounces—slightly more than a tin of baked beans, the little girl wasn’t expected to survive, as her twin, Dotty, died in the womb when her mother Amy went into labor after surgery to separate them.

However, the brave little girl, who was born at St George’s Hospital, London, has defied all the odds and come out of her ordeal with “no issues,” which according to doctors is because of her mother’s “kangaroo care.”

Amy, 33, was able to hold Elsie for only 30 seconds when she was born as she was whisked away to the NICU.

Tiny Elsie proved she was a little fighter and battled on despite doctors warning her parents she may not make it through surgery at just 10 days old.

“She got necrotizing enterocolitis—a hole in her bowel—and the doctors took me and Scott aside to say she might not survive the surgery,” Amy said. “They said with her being that small, there was a chance she wouldn’t survive the anesthetic, and even if everything went ok, she’s still at risk while recovering because of infections and things.”

Amy said the family had no idea how long it would take because the medical team wasn’t aware how much of her bowel had survived until they opened her up.

“We had to wait three hours and it was the longest three hours of my life, we were just constantly clock-watching,” Amy recalled. “It was a really scary time.”

After the surgery, the consultant rang to say that she was out but didn’t provide too many details about how it had gone. Thus the parents literally ran to get her.

“It was the biggest relief when we saw her again, and the surgeon said it went amazing, like the best-case scenario,” Amy said.

But Amy had to wait for a month to hold her, as Elsie was fighting for her life in the incubator.

“Having to wait so long to hold her was really difficult, so when I finally did, it meant so much,” Amy said. “The first time I held her properly was honestly amazing. I’ve never known anything like it.”

For Amy, who also works as a bridal stylist, there was no other feeling in the world that could compare.

Doctors advised Amy that Elsie’s best chance of survival was to have cuddles with her mother. They shared that for Elsie’s heartbeat to grow stronger and start to regulate itself, it was important for her to be close to her mother’s heartbeat.

So for hours every day, Amy sat and held her tiny daughter close to her chest, cuddling her and seeing her get stronger and stronger.

“It was just amazing. I would hold her and I could see on all the monitors that her heart rate was relaxing. It felt so special,” Amy said. “It’s something that was good for me and for her because it helps bring my stress down being able to hold her.”

Amy had no idea that cuddling her newborn daughter for a few hours each day would have such an impact. “It saved her life,” she explained.

The mom of two, who is from Barnsley, South Yorks, repeated the process for four months.

Known as kangaroo care, cuddles with parents have been proven to help premature babies survive.

During the four months that Elsie was at the hospital, her father, Scott, and brother, Charlie, 7, who were at home to attend work and school, would have to travel down to London every weekend to see Elsie.

“It was really difficult because I was spending most of the week on my own,” Amy said. “The two of them would arrive in London late on a Friday night, and children weren’t allowed on the ward so we were never all together as a family.”

One of them had to remain with Charlie, so when Scott would be in the hospital to be with Elsie, Amy would be out with Charlie.

However, one weekend when Scott’s sister came down with them, she was able to stay with Charlie, and thus Scott and Amy were with their daughter together.

Amy had been pregnant with twins but suffered from twin-to-twin transfusion syndrome, a condition in which one baby receives all the nutrients and vitamins and the other twin does not.

“I had to have endoscopic laser ablation, which is a surgery to separate the twins, down in London, and at first, doctors were impressed with how it went,” Amy said. “But then I started bleeding very heavily and I had to have three blood transfusions.”

They then lost the heartbeat of the baby, and after a few hours, Amy had lost so much blood that she went into labor at 23 weeks and four days.

Sadly, because Elsie’s twin died before 24 weeks, she was legally classed as having a miscarriage, despite Amy giving birth to Elsie just hours later.

“Losing Dotty was really difficult. Because it was before 24 weeks, I was never able to register her as a stillborn, she was classed as a miscarriage,” Amy said. “That meant I wasn’t able to put on Elsie’s birth certificate that she was a twin, either.”

Amy laments that having that on the paperwork would have helped give her closure, as she had already been through so many challenges.

But the family was able to get a commemorative certificate for Dotty, and her ashes, which, according to Amy, was really helpful for the grieving process. Meanwhile, her funeral was paid for by the charity First Touch.

After four months in the hospital and one month at a hospital in Barnsley, Amy was able to bring Elsie—who is now one of the youngest babies born in the UK to survive—home.

“She’s literally defied all the odds, she’s just amazing, doctors are always so impressed with her,” Amy said. “At the moment, she’s still on oxygen, but every time we go to a doctor’s appointment they reduce the amount she needs and she’ll be off it soon.”

“Bringing her home for the first time was honestly amazing,” Amy said. “I almost didn’t think it was real… I’ve never felt such a relief as when we got to walk out of the hospital and take her home.”

For Amy, this entire process has been like a “weird dream.” Before the family left the hospital, the mom also learned from a doctor that Elsie was the first baby she’d intubated who had survived.

“To think she’s overcome all that and now come away with no issues, we’re so incredibly lucky,” Amy said. “It’s so lovely to have her home and the whole family be together.”

Seeing Elsie, who’s currently thriving, reunited with Charlie is a special moment for the parents.

“It’s so surreal to hold your baby and think about how you could have lost her, and having her home after all that uncertainty was just bliss,” Amy shared.

Scott and Amy are now fundraising for the charity that helped save Elsie’s life, First Touch.