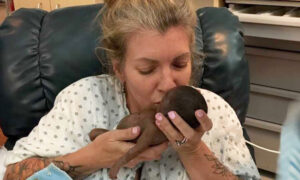 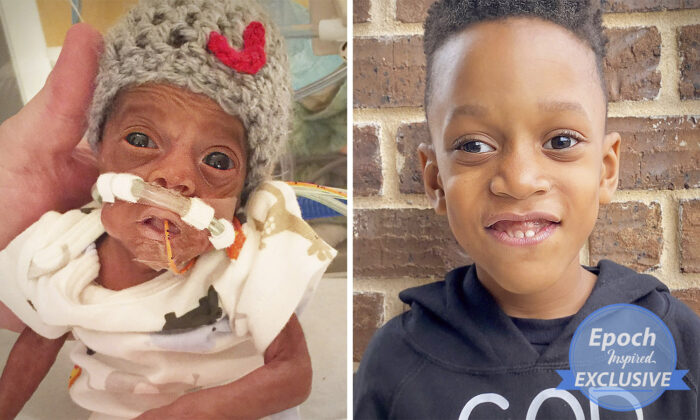 Preemie Born at 22 Weeks Was Given 20 Percent Chance of Survival, Now 5, Thriving, Wants to Become a Doctor

A “miracle baby” from Southern California, who was born at just 22 weeks’ gestation, has caught the attention of the internet, as the baby boy, Jaxson, is now a healthy, thriving 5-year-old.

Jaxson’s mom, 34-year-old Ima, took to Instagram last month with an inspirational Instagram post, hoping to bring “a little boost of hope” in the midst of a global crisis.

She hailed her son’s life as “a testimony of hope, faith, love and just how amazing modern day medicine is.”

At just 20 weeks into her pregnancy, she was diagnosed with a urinary tract infection (UTI) and was prescribed a round of antibiotics and rest, but the infection had already taken a toll. Soon, she ended up in labor.

“This was a very scary moment for us,” she told The Epoch Times. “My Husband broke down in the hallway, I was a mess as well, just so scared and couldn’t understand why this was happening to us.”

But their son wasn’t out of the woods yet, not by a long shot.

“During that time my OB asked us what we wanted to do,” she shared. “I told the doctor to save my son. I told him that I didn’t care what happened to me, just give him a chance.”

The doctors had devastating news for his parents: the infant only had a 20 percent chance of survival.

“They initially did not want to provide medical intervention,” Jaxson’s mother said. They gave reasons such as disabilities, both mentally and physically, and lifelong health challenges—not very positive.

But the parents were faithful that Jaxson would be all right if given a chance. Ima and her husband, Marcus, held hands, prayed, and made the difficult decision to embark on the perilous medical journey that lay ahead.

It was far from easy, but the outcome was far better than what the doctors had expected.

At just 13 days old, he had heart and eye surgery; at 9 months, he had a hernia repair, and he has been attending speech therapy since the age of 2. He also underwent isolation from other kids.

“We worked very hard to protect him and build up his immune system which meant that he didn’t attend daycare or school until he was 3 and he was very sheltered,” his mom said.

Yet, Jaxson’s medical challenges never stopped him from thriving like any other little boy. He loves playing outside, riding his scooter and bike, playing with cars and trucks, and swimming.

Ima shared in her recent, triumphant Instagram post: “We were told he may never walk, or talk, or be severely disabled … today at 5 years old, he is NONE of those things! He is a healthy, happy and active toddler!”

Now in kindergarten, Jaxson is looking ahead and dreams of becoming a doctor himself one day.

His mother says she’s thankful his health issues weren’t more dramatic, yet reflects that their journey has fundamentally changed their outlook on life, making them more appreciative for “every milestone big or small.”

She also offered a few words of encouragement for other parents of preemie babies: “Overall, having a positive attitude, love, good perspective and constant gratitude is the key to how we have managed through the past 5 years.”