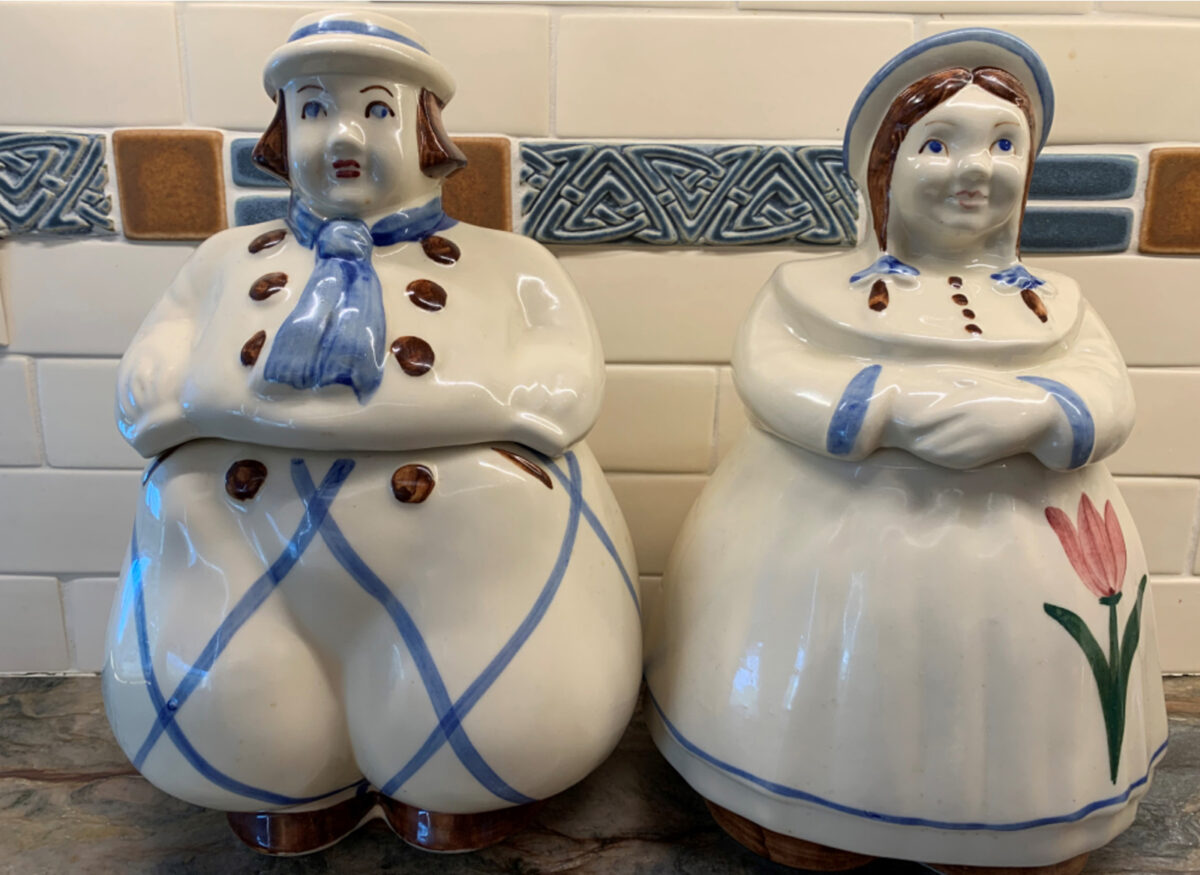 What child would not have found these cookie jars fascinating? (Handout/TNS)
Home

Good morning:
I am curious to know what you can tell me about this pair of cookie jars. I got them from my grandmother, and if I remember correctly, they were given to her by a pair of sisters who boarded with her, my mom and my uncle in Grand Island, Nebraska, during WWII. A friend tells me her family had the female and called it “Susie Cookie Jar.” I am trying to find four identical sets for my four children, but all I can find have different patterns. Can you help?
Thanks,
H. H., Chicago

Dear H. H.:
We would never say this is an impossible task, but it is pretty darn close. But like horseshoes, hand grenades and thermonuclear weapons, close may have to be good enough.

First of all, it is important to know that although the jars are just marked ” USA,” they were made by the Shawnee Pottery Company of Zanesville, Ohio, which began operation in 1937 and went out of business in 1961. It should also be mentioned that during the WWII years of 1941 to 1946, Shawnee was taken over by the United States Army Air Corps and used as a supply depot and parts manufacturing facility.

During their relatively brief time in business, Shawnee made everything from aquarium ornaments to salt and pepper shakers, pie birds, flowerpots, lamps, planters, pitchers, miscellaneous kitchen wares, dinnerware and yes, cookie jars. The list could go on and on, and they made vast quantities of many items.

Shawnee is perhaps most famous for their “Corn King” and “Corn Queen” lines and for their cookie jars. “Smiley Pig” is well known, as are “Winnie Pig,” “Muggsy” (an adorable pup wearing a toothache scarf around his head), “Puss n’ Boots,” “Sailor Boy” and “Drum Major.” Collectors especially look for elaborately decorated “Lucky the Elephant” and ” Cookie House.”

The pair in today’s question are “Dutch Boy” and “Dutch Girl,” which we have also seen referred to as “Happy Jack” and ” Happy Jill.” Most of the character jars came in a variety of decorations and color schemes. Those with unusual coloration, various decals and gold trim can demand something of a premium. In the case of “Dutch Boy” and “Dutch Girl,” look for the examples marked “Great Northern.”

That H. H. has a pair is very nice and does help the dollar value a bit. As for finding four sets that exactly match, good luck, but we discovered similar examples are for sale on eBay and Etsy for prices as low as $20. Most, however, were in the $50 to $80 range. Add the interest in a pair and we think the retail value of this couple would be in the range of $150 to $200, if they are in perfect condition.