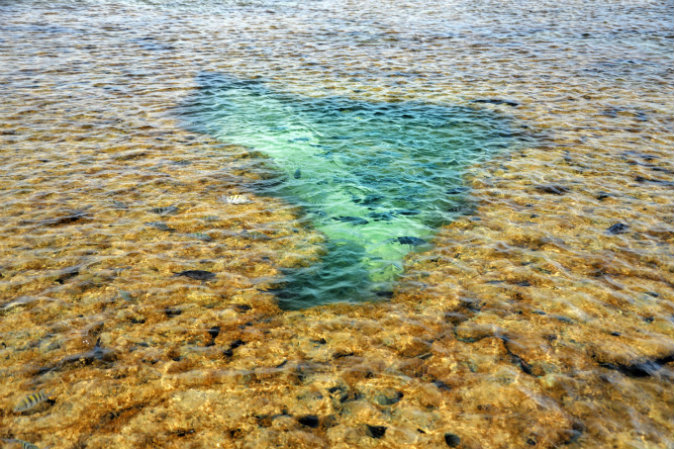 Around 60 kilometers (37 miles) south from Recife, the capital of Pernambuco state in Brazil, lies the beach town of Porto de Galinhas. The beach nearby is believed to be one of the country’s most beautiful – this is obviously because the numerous pools shaped naturally by sea waters among the stunning coral reefs that surrounds the coast.

Porto de Galinhas is very popular in terms of tourism, however mainly with Brazilians. When I was there, I didn’t encounter any foreigners who usually, when traveling to Brazil go only to Rio de Janeiro. Also, very rarely people spoke English. This situation might change however after the 2014 FIFA world cup as Recife is one of the cities hosting the games.

How to get to Porto de Galinhas

Porto de Galinhas is easily accessible both from the Recife city center (the main bus station) and Recife airport. There are numerous buses connecting the two places from around 5 AM until 10 PM. The name of the bus company that stops at the airport and some other smaller towns is Cruzeiro, the journey takes 2 hours 30 minutes and the ticket fare one way is around 7 BRL (2.30 EUR/3.20 USD).

What to do in Porto de Galinhas

The town of Porto de Galinhas

The town of Porto de Galinhas is very small and very easy to walk around. The main street doesn’t look particularly attractive, it’s a bit messy and, if you traveled somewhere in the south of Brazil, you might get the impression that you are in a completely different country. However, the parts closer to the beach are really amazing, with many good restaurant with delicious sea food, pubs and clubs.

While strolling down the town’s pedestrian streets, you will surely see many performers, I was really lucky to come across some women doing fire performances, it was really unbelievable what they could do with the torches. I wrote about the performances and uploaded some beautiful photos in this post here.
Apart from the performers, I saw some children painting stunning images on ordinary bathroom tiles with their fingers. At very little cost, it’s really good to have something like this as a souvenir, it’s hand-made locally, not like the plastic statues made in China available at souvenir stands.

Porto de Gainhas literally means The Port of Hens and there’s a legend about where this name came from. In the past times, where the European conquerors where coming to Brazilian shores by ships, they were bringing illegally great numbers of slaves, mainly from Africa. To hide this fact, they were saying that they were transporting chickens. Thus the name “Port of Hens” emerged.

You will probably notice that the town has something do with the chickens before you decipher its name, there are a lot of big, colorful statues of hens everywhere.

The beach of Porto de Galinhas

I stayed in Porto de Galinhas three days. On the first two days, I went on two exciting trips, far from the town to see other beaches. I had a ride in specially prepared buggies on the sand dunes and did some snorkeling. The third day, I spent on the beach right in Porto de Galinhas, and, in my opinion it was the best. The beach is beautiful, the sea water perfectly clear, the coral reef stunning, and the natural pools – indescribable.

The pools of turquoise-green water occur naturally and they are surrounded by the hard, brownish coral reefs. During low tide, it is possible to reach them by special rafts, or even swimming, however they are a bit far from the beach. The tour with the raft that will take you there and back is around 10 BRL (3.30 EUR/4.50 USD). It lasts 1 hour but you can go back or extend the time spent there as you wish, if you pay additionally.

Inside the pools (one of which resembles the exact shape of the map of Brazil) there are plenty of colorful fish that are not afraid of humans at all. You can swim and snorkel among them, the guides will give you some food to feed them. They literally eat directly out of your hands. It’s an amazing experience.

It’s better to use a pair of flip flops while walking on the coral reef as it is quite rough and some parts may be sharp. Also, there are many black urchins (also called sea hedgehogs). They are not toxic or dangerous to humans, however stepping on them will not be the most pleasant experience as the spikes are really like huge needles. You can lift one out of water and place it on your hand to observe the way it walks using the spines to move.

Other activities, tours and fun

As I mentioned above, on the first two days I visited two different places. There are plenty of different tour agencies in Porto de Galinhas and surely you will see many people advertising their services in the streets. You can always bargain, and, if there are more people traveling, the price is usually lower. The choice of the places to visit and activities to do is really wide. You can go for snorkeling, diving, relaxing on one of the beaches, try a buggy ride etc.

On the first day, I did the buggy ride in a specially prepared car, it takes you to a few beaches around Porto de Galinhas, you can also choose where you want to go, how much time you wish to spend etc. For a half day trip one vehicle cost 150 BRL (50 EUR/68 USD). There are seats for four people in one buggy. One person sits beside the driver, the others on top of the back seat (those seats are open-air).

This ride in Europe or the US wouldn’t be legal as there are no seat belts available for the passengers who sit in the back, and they just have to hold on to the rails in front of them. It’s really cool and adventurous, I just didn’t like the part where we had to go on a motorway for a long time to get to Muro Alto beach.The buggy stops for some time on each of the beaches so you can enjoy them. Muro Alto is beautiful, with a long strip of coral reef, you can rent kayaks and easily reach the reef.

On the second day, I went on a trip to Maragogi. It’s 60 kilometers (37 miles) south of Porto de Galinhas. The journey was a bit long and tiring (you leave Pernambuco and enter Alagoas state) and not too cheap (around 80 BRL – 26 EUR/35 per person). The beach at Maragogi is nice but, in my opinion, not as nice as that one in Porto de Galinhas. There are not as many fish and the coral reef seems not as amazing. However, the snorkeling experience was good and fun (although the best I had was in Lakshadweep Islands and Mauritius). The only thing I can complain about was the lack of sea life – colorful fish etc. That’s why, in Porto de Galinhas it was much better. If you are on a budget – stick with Porto de Galinhas.

What’s interesting, while on the tour there, I was the only foreigner and the guides didn’t speak any English. I wonder whether it will change after the 2014 World Cup.

Copyright © 2014 by Adventurous Travels. This article was written by Tomasz Lisowski and originally published on www.adventurous-travels.com.