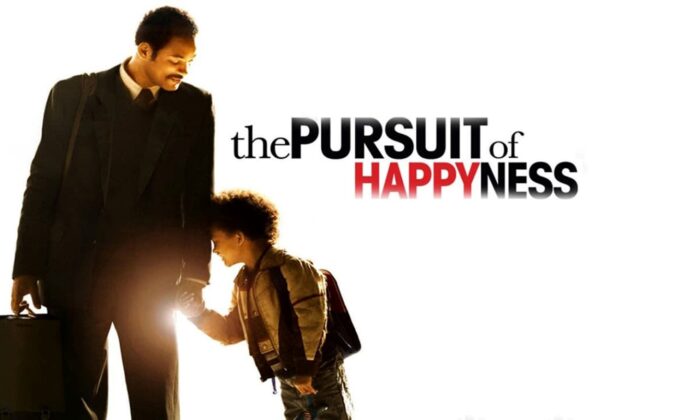 Father and son Will and Jaden Smith play father and son in a story of a man working hard to achieve his dream. (Sony Pictures Releasing)
Film Reviews

Popcorn and Inspiration: ‘The Pursuit of Happyness’: Biopic About Self-Determination and Self-Reliance

Serendipity is astounding. I recently began watching a series of motivational videos, and once in a while they feature a black gentleman with a distinctively deep voice, but I never see his name. One of the things he says over and over is that you have to do things yourself because the cavalry isn’t coming to save you. I kept wondering why they’d intertwine his parts of the videos with scenes from a movie featuring Will Smith and his son Jaden. Curious, I looked up Smith’s filmography (well, scoured through it, actually) and found out that the film was titled “The Pursuit of Happyness.” I also discovered that it’s a biographical piece covering the rags-to-riches life of a man named Chris Gardner.

And guess what! After watching the film, I looked up Gardner and discovered that he was the man who has affected me in all of those motivational videos.

Helmed by director Gabriele Muccino, the film is set in San Francisco during the early 1980s. Salesman Chris Gardner (Will Smith) has invested virtually all of his money in bone marrow scanners. He lives with his wife, Linda (Thandie Newton), and young son, Christopher (Jaden Smith). Through the opening scenes, we can see that Linda constantly nags Chris and isn’t supportive of him in the least.

One day, Chris is walking the city streets to sell his medical devices when he spies an elegant, red sports car. The car’s expensively suited driver steps out, and Chris spontaneously asks the man what his profession is. How can he afford such a vehicle? When the man replies that he’s a stockbroker, Chris’s eyes light up: His destiny has been decided.

But when Chris reveals his new dream to Linda, their divide ruptures and she walks out on both her husband and their son. Instead of wallowing in despair, an ambitious fire engulfs Chris, and through much effort, he scores an internship with a major brokerage firm.

However, there’s a catch: He’ll have to not only survive but strive through a six-month unpaid internship to earn his shot at a paid position. He also has to compete with other hungry interns.

Hard Work and a Positive Attitude

The rest of the film covers his many ups and downs as he struggles to keep himself and his son from falling into homelessness, and works his behind off at the firm, while maintaining a positive outlook about his slim prospects.

Much of the film features Chris running from place to place, either with his son, a briefcase, or one of his devices, in the “pursuit” of happiness, both literally and figuratively.

This film has many outstanding scenes, some tragic and heartbreaking, and others heartfelt and inspirational. Of course, there’s a little of that good old Will Smith comedy sprinkled in to keep things from becoming overly serious or self-indulgent.

For example, there’s a humorous scene where Chris shows up at a run-down daycare center in Chinatown to drop off his son. The place is run by a Chinese woman who speaks broken English and seems to think that having the kids watch TV all day is educational. When he complains about that, as well as that the daycare’s sign outside spells “Happiness” as “Happyness” (the film’s title), she responds in some fast-talking Cantonese, and we get the gist of what she’s intimating.

The more dramatic scenes are handled equally well, such as when Chris and his son get kicked out of their low-rent apartment and have to spend their nights sleeping in a scummy (and dangerous) subway bathroom. Despite their circumstances, Chris’s ever-positive spirit rises to the occasion: He portrays the bathroom to his son as a cave where they’re hiding out from dangerous creatures.

One of the things that I really appreciated about this film is that it never pulled out the tired and worn-out race card found in so many movies that portray blacks struggling. Chris’s story simply reveals that with inner fortitude and self-reliance, anybody can make it in this great country, no matter where they’re from on the socioeconomic spectrum.

The actors’ performances were also spectacular, with Smith turning in a riveting portrayal of Chris Gardner. Smith never becomes overly dramatic to make scenes feel impactful. Instead, he registers subtle emotions in both his facial expressions and his body language. Smith’s son Jaden, as well as Thandie Newton, were also excellent as his wiser-than-his-years son and angry ex, respectively.

“The Pursuit of Happyness” should compel many folks to feel more than inspired. It’ll make you feel like you can take on the world—and win. I think that’s a pretty good message to broadcast in today’s tumultuous and uncertain times.

Ian Kane is a filmmaker and author based out of Los Angeles. To learn more, visit dreamflightent.com or contact him at twitter.com/therealiankane