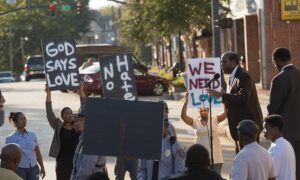 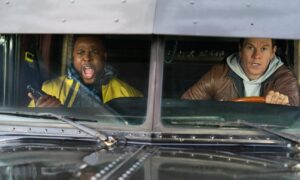 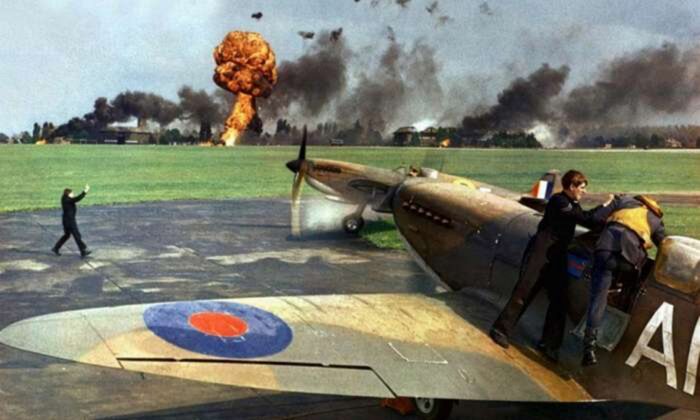 A scene from “Battle of Britain,” which pits Britain’s Royal Air Force against the Luftwaffe. (MGM)
Film Reviews

Popcorn and Inspiration: ‘Battle of Britain’: An Inspiring Epic Depicting the Best of Great Britain

British Prime Minister Winston Churchill once addressed members of the House of Commons back in June of 1940: “The ‘Battle of France’ is over. I expect that the Battle of Britain is about to begin.” The following month, Nazi Germany fulfilled Churchill’s prophetic statement and began unleashing its aerial onslaught upon Great Britain in earnest.

What better material to draw on from the annals of World War II than one of the most valiant defenses in the history of warfare—the Battle of Britain? The titular film, “Battle of Britain,” was helmed by Guy Hamilton in 1969, who along with the film’s star-studded cast, told the famous tale with the utmost skill and talent. It was a massive effort that won’t soon be repeated.

Great Britain was still licking its wounds from the debacle at Dunkirk, where its forces (along with other Allies) had to evacuate from France in the face of the superior German military that was steamrolling through Western Europe. Germany had plowed through not only France but also Norway, and now Hitler turned his attention to the next logical Allied target: Great Britain. The island nation had its back against the wall.

The German war machine was actually planning a grand-scale amphibious invasion of the island’s shores, but the Royal Air Force (RAF) clung stubbornly to its air superiority over the North Sea and other regions between the UK and Germany.

The film is mainly about the RAF’s defense of its territory against the seemingly overwhelming might of the German air force—the Luftwaffe.

In a scene that illustrates this David and Goliath factor, an unnamed senior civil servant (Harry Andrews) apprises Air Chief Marshall Sir Hugh Dowding (Laurence Olivier) of the odds they face, saying: “We’ve got 650 planes!” To which Sir Dowding replies: “And they have 2,500 aircraft, haven’t they?” No wonder the Germans viewed (albeit mistakenly) the weakened British as relatively easy prey.

The Luftwaffe went to work by first attempting to level Great Britain’s infrastructure, both military and civilian. The film shows how the Germans concentrated many of the bombing runs on the southern portion of the country—hitting factories and airstrips in order to grind the island’s industry to a halt.

But the British had an ace up their sleeve; they’d developed a very-long-range radar system that tipped them off to the German air raids far in advance. This allowed them to prepare and even counter the raids in some cases, sending German aircraft spiraling down to their fiery doom.

From the outset of the film, you can see the German military’s leaders brimming with confidence, including their overall commander Reichsmarschall Hermann Göring (German actor Hein Riess). But they didn’t quite count on the resourcefulness and, in many cases, gutsy determination of the British, who fight for every square inch of airspace around their island with indefatigable grit.

In one scene, we see freshly recruited RAF airmen scrambling to their training sessions, along with their commanders, the likes of whom include Squadron Leader Canfield (Michael Caine).

Göring soon turns his attention to London, and a major bombing of both the British capital and other metropolitan centers soon follows. The RAF responds by conducting its own daring air raid over Berlin.

Much of the film is dedicated to re-creating aerial dogfights as the two powers vie for supremacy. Like other epic-scale war films that were popular during the immediate post-war eras of the 1950s and ’60s, so many stars are cast in the film that none get an overabundance of screen-time, just enough so that audiences relate to the characters and their individual causes.

With a punchy, well-paced screenplay written by James Kennaway and Wilfred Greatorex and some phenomenal aerial photography that shows the Allied air forces locked in mortal combat with the Luftwaffe, Hamilton manages to effectively convey a period that marked a pivotal change in the war.

The battle itself was the first military campaign in wartime history to be almost completely fought by air forces.

The only drawback to be found in the film is a half-baked, melodramatic romantic subplot involving one of the RAF’s commanders, Squadron Leader Colin Harvey (Christopher Plummer), and Section Officer Maggie Harvey (Susannah York). The romantic scenes feel forced and unnecessary.

Overall, “Battle of Britain” is a super-patriotic piece of cinema that should appeal to both war-film junkies as well as those who appreciate high drama and high stakes. The production values hold up well by today’s standards, and the cast seems genuinely respectful of the historical significance that the movie portrays, as well as their individual characters. It is truly a fantastic drama that is both immersive and inspiring for the entire family.