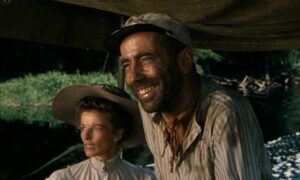 Popcorn and Inspiration: ‘The African Queen’: A Real Adventure
0 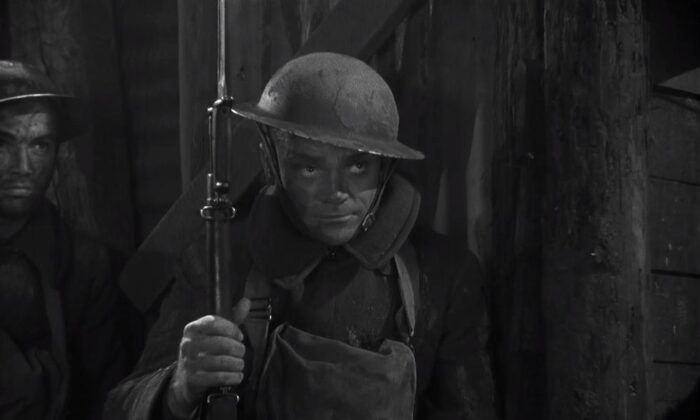 This Memorial Day, honor the brave with old movies. James Cagney in a film set during World War I, "The Fighting 69th." (Warner Bros)
Film Reviews

Many classic films depict servicemen’s valiant wartime deeds, and these deserve another look on the day we remember those who have fallen for our sake: Memorial Day.

After the success of 1939’s “Gone With the Wind,” American Civil War films became popular. Before America joined World War II, World War I was the most frequent setting for combat films. During World War II, stories about the war were popular, remaining so for years.

Uniting and Sacrificing for Victory

A classic Civil War drama is 1951’s “The Last Outpost.” A Confederate cavalry brigade plagues a Union outpost. Union colonel Jeb Britton (Bruce Bennett) comes to capture them, but trader Sam McQuade (John Ridgely) insists that setting local Apaches against the Confederates is the solution. Britton fears they will attack all Americans once provoked, but McQuade persists.

Meanwhile, Britton learns that McQuade’s discontented wife, Julie (Rhonda Fleming), was engaged to his brother, Vance Britton (Ronald Reagan), before he joined the Confederate Army. When Col. Britton encounters the Confederates, he realizes their captain is his brother. After Apaches kill trader McQuade, Vance impersonates the Union major sent to recruit the Apaches, visiting them himself. He must release the imprisoned Apaches (arrested for McQuade’s murder) before the tribe attacks, all while keeping his Confederate identity secret.

In “The Last Outpost,” the war within America is reflected by the brothers’ opposing military sides. However, near the film’s end, Union and Confederate soldiers unite against a common enemy. Jeb, Union soldiers, and townspeople try to defend a town against the Apaches. Knowing the Native Americans hopelessly outnumber them, Vance’s regiment joins the battle, saving his brother’s defense from annihilation. Although enemies in the war, these soldiers unite as Americans. Their loyalty helped America reunite after the war, just as the Britton brothers plan to reconcile.

In Europe, the 69th finally sees battle. Although Jerry has longed to fight for months, he acts cowardly in the trenches, causing comrades to be killed. Maj. Donovan wants Plunkett transferred, but Father Duffy asks that he be given one more chance, believing faith will give Jerry courage.

In “The Fighting 69th,” the Fourth Alabama Infantry Regiment camps by the 69th. A fight ensues when an Alabaman brags that “they” beat the 69th during the Civil War. Maj. Donovan stops the fight, reminding the soldiers that they are no longer enemies:

“Those men on both sides were Americans. They fought and then rose above their hatreds to become one people again. … Our two regiments are now brigaded together. … But there’s no room … for sectional feuds, because we’re all one nation now, one team. An all-American team pulling together and known as the United States Army.”

Americans must unite for victory.

A great World War II film is 1945’s “They Were Expendable.” Lieutenants “Brick” Brickley (Robert Montgomery) and “Rusty” Ryan (John Wayne) struggle to convince superiors of their PT boat squadron’s value. After Pearl Harbor, the squadron is relegated to messenger duties. Eventually, they are assigned to destroy an enemy cruiser. Brick chooses his boat and Rusty’s for the mission, but he replaces Rusty after Rusty is discovered to have blood poisoning from shrapnel.

While restless in the hospital, Rusty is tended by nurse Sandy Davyss (Donna Reed); they bond at a hospital dance. After Rusty recovers, Sandy transfers to the island where his squadron is located, and a romance blossoms. Soon after, they receive a special mission, transporting important personnel 600 miles. These personnel include Gen. MacArthur and his family, but this prestigious mission is just one of the squadron’s many jobs toward victory.

“They Were Expendable” shows that service is not always heroic. Seeing Lt. Brickley’s disappointment about the messenger assignment, Adm. Blackwell (Charles Trowbridge) explains that duty is not always exciting:

“You and I are professionals. If the manager says, ‘Sacrifice,’ we lay down a bunt and let somebody else hit the home runs. … Our job is to lay down that sacrifice. That’s what we were trained for, and that’s what we’ll do.”

These courageous sailors find passive assignments harder than dangerous missions, but they follow orders. As Brick tells Rusty, “Theirs not to reason why. Theirs but to do.” “And die,” Rusty finishes, although he doesn’t like being “bored to death.” However, their opportunities come because they willingly serve as needed.

Two of these movies feature beautiful tributes to fallen soldiers. After the first battle in “The Fighting 69th,” Sgt. Joyce Kilmer (Jeffrey Lynn), a famous poet from the 69th, recites excerpts from “Rouge Bouquet,” a poem he’d written for fallen comrades:

“Perhaps their brave young spirits hear
The bugle sing,
‘Go to sleep!
Go to sleep!
Slumber well where the shell screamed and fell.
Let your rifles rest on the muddy floor,
You will not need them any more.
Danger’s past;
Now at last,
Go to sleep!’
…
“And up to Heaven’s doorway floats
From the wood called Rouge Bouquet,
A delicate cloud of bugle notes
That softly say:
‘Farewell!
Farewell!
Comrades true, born anew, peace to you.
Your souls shall be where the heroes are,
And your memory shine like the morning-star.
Brave and dear,
Shield us here.
Farewell!’”

In “They Were Expendable,” two sailors on Rusty’s boat, “Squarehead” Larsen (Harry Tenbrook) and “Slug” Mahan (Murray Alper), are killed in action. Rusty delivers the eulogy, describing the importance of servicemen’s funerals:

“A serviceman is supposed to have a funeral, as a tribute to the way he spent his life. Escort, firing squad, wrapped in the flag he served under and died for. In war, you gotta forget those things and get buried the best way you can.”

Rusty recites “Requiem” by Robert Louis Stevenson in their honor:

“Under the wide and starry sky.
Dig the grave and let me lie.
Glad did I live and gladly die.
And I laid me down with a will.

This be the verse you grave for me:
‘Here he lies where he longed to be.
Home is the sailor, home from the sea,
And the hunter home from the hill.’”

Then, one sailor plays “Taps” on harmonica.

The Citadel of Peace

“The Fighting 69th” ends with Father Duffy’s prayer for remembering servicemen, a beautiful tribute to all American veterans:

“Hear … the prayer of this, America’s lost generation. They loved life, too. … It was as sweet to them as to the living of today. They accepted privation, wounds, and death, that an ideal might live. Don’t let it be forgotten. … Amid turmoil and angry passions, when all worthwhile things seem swept away, let the tired eyes of a troubled world rise up and see the shining citadel of which these young lives formed the imperishable stones. America, the citadel of peace.”