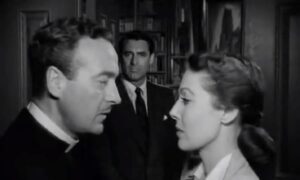 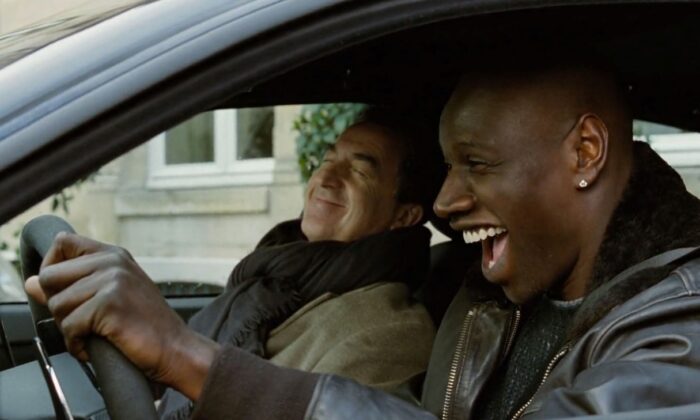 Philippe (François Cluzet) and Griss (Omar Sy) bond despite their differences, in “The Intouchables.” (The Weinstein Company)
Film Reviews

Popcorn and Inspiration: ‘The Intouchables’: A Heartwarming Biopic About Togetherness Despite Differences

As we head into 2021, forms of media that focus on the positive aspects of life are a good way to begin the new year—especially in light of all the divisiveness that has encapsulated 2020. In the cinematic realm, I couldn’t think of a better way to celebrate unity and togetherness than watching the French film (through, yes, English subtitles) “The Intouchables.”

Produced in 2011 and helmed by directors Olivier Nakache and Éric Toledano, the film is based on the unlikely, real-life friendship of Corsican French businessman Philippe Pozzo di Borgo and his caregiver, Abdel Sellou. In the movie, Mr. Borgo is known simply as Philippe (François Cluzet), and Sellou’s name was changed to Driss (Omar Sy).

Philippe comes from inherited wealth, having been born into a noble family. Unfortunately, he suffered a horrible hang-gliding accident and, as a result, is a paraplegic. Philippe is interviewing applicants for a caretaker position at his palatial Parisian residence. There’s a long line of prospective candidates for the position, but they all seem to answer questions as if they’re saying things they want Philippe to hear, instead of being frank. Thus, they all end up sounding the same.

Suddenly, an impatient Senegalese man, Driss, bursts into the interview room. He’s collecting signatures from prospective employers so that he can gain government financial benefits should he be turned down. He isn’t a trained caretaker and doesn’t know the first thing about dealing with people with special needs; all he wants is Philippe’s signature.

But Driss is upfront about everything. His candid nature impresses Philippe, who tells him to return the following day to pick up the signed document.

When Driss shows up the next day to fetch the form, one of Philippe’s assistants, Yvonne (Anne Le Ny), shows him around the opulent residence. She finally guides Driss into Philippe’s bedroom and the latter hires him on the spot. Then, in an effort to preserve Driss’s sense of honor (instead of making the job offer seem like a handout), he presents the position as a challenge: He tells Driss that he’ll try him out as a caretaker for a month and warns him that none of the recent caretakers could make it past the two-week mark.

Driss accepts and starts to settle into his new lodgings’ large, luxury quarters complete with a bathroom the size of most living rooms. However, he soon begins to realize just how challenging the position is. As an untrained caretaker, he learns his job on the fly—feeding, bathing, and performing other fundamental duties for his new boss.

This process results in several hilarious scenes, such as when Driss attempts to wash Philippe’s hair and realizes that he’s accidentally using foot cream instead of shampoo; or when Driss is feeding Philippe and almost puts a fork into his eye because of staring at Philippe’s beautiful assistant, Magalie (Audrey Fleurot), as she walks by.

But beyond Driss’s day-to-day care of Philippe, and despite being from seemingly opposite sides of the socio-economic spectrum, the two men begin to develop a special friendship. Driss’s infectious optimism and exuberance (in the face of growing up in crushing poverty) begins to rub off on Philippe, and soon the two are cracking crude jokes with one another and talking about their disparate pasts.

The film deftly switches back and forth between comedic and dramatic beats. For instance, during a touching scene in which Philippe and Driss are dining at a restaurant together, Philippe reveals that the love of his life was a woman named Alice who passed away due to a terminal illness. Driss watches as Philippe gloomily reminisces about the tragic circumstances, but suddenly he uses a few moments with a waiter to comic effect, which lifts Philippe’s spirits.

Unlike some of the more clichéd Hollywood films that depict similar subject matter, this one avoids the usual pitfalls of inauthenticity and oversentimentality. This is due in no small part to the outstanding performances by the two leads, Cluzet and Sy, whose chemistry seems earnest and natural. The way that they develop rapport is gradual, and both actors emote in such believable ways that they practically disappear into their characters.

As the saying goes, “there’s nothing new under the sun.” But the way a tale is told can still be unique. So is the case with “The Intouchables,” a heartwarming cinematic experience that carries with it a message of shared humanity, friendship, and unity, and offers a great way to begin the new year.