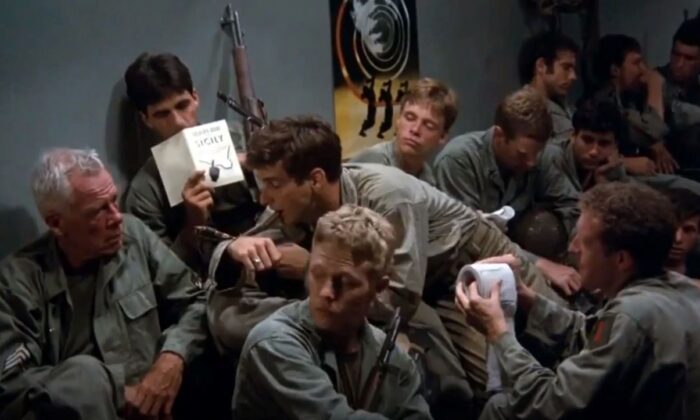 Popcorn and Inspiration: ‘The Big Red One’: A Thought-Provoking and Ultimately Uplifting World War II Epic

World War II films may seem like a dime a dozen these days—virtually to the point of overkill. While many of them are mediocre or worse, there have been some modern-day World War II cinematic efforts that have paid off, such as the slickly produced modern classic “Midway” (2019), and the soulful and harrowing war drama “Waiting for Anya” (2020).

But back in 1980, there was also a very well-constructed and peppily paced World War II epic produced, which many have likely since forgotten, titled “The Big Red One.” And it’s a real shame because one of the things that make this film so unique is that it was written and directed by a World War II veteran by the name of Samuel Fuller. In fact, it’s an autobiographical piece based on Fuller’s experiences during the war. The film’s character “Zab” is based on him.

The film opens during World War I with an unnamed sergeant (Lee Marvin) somewhere in France (fittingly shot in black and white), attempting to return to his command post. As an immense wooden statue of Jesus Christ looks on, the sergeant spots a German soldier emerging through wispy swaths of battlefield smoke. The German is holding his hands up as if in surrender, but the sergeant ambushes him with his combat knife, killing him.

Later, after making it to the command post, his superior (Charles Macaulay) tells him that the war has been over for some time, and then the sergeant reflects darkly on his earlier actions: killing the German soldier after Germany had officially surrendered.

We are then transported to the coast of North Africa in 1942, where the now grizzled sergeant is going up against Germany again during World War II. We’re also introduced to the other main characters who form the core squad mates under his command. They’re all inexperienced privates as the first act opens and become increasingly seasoned as the film progresses.

There’s Griff (Mark Hamill), a thoughtful and sensitive artist; Zab (Robert Carradine), an aspiring writer; Vinci (Bobby Di Cicco), a street kid with musical tastes; and Johnson (Kelly Ward), a farm boy. They are part of the 1st Infantry Division—also known as “The Big Red One.”

The sergeant tells his squad that the Americans have dropped leaflets over the French forces who are dug in on the North African coast, far in advance of the U.S. amphibious landing. The leaflets warn the French not to attack them when they arrive. When the sergeant and his squad do touch down on the beaches, a Vichy French (French who are sympathetic to the Nazis) commander orders his soldiers to open fire on them.

The French soldiers refuse to do so and instead kill their commander since they know the Americans are there to help. In his death throes, the commander’s trigger finger squeezes down on a French machine gun he was holding and it fires at the American soldiers. A brief battle ensues, resulting in some unnecessary deaths on both sides of the Allied forces. The irony in this scene underpins an absurdist tone that permeates the entire film.

As they fight their way inland, the sergeant gets shot and ends up in an Algerian hospital—separated from his men. When the hospital is attacked by German forces, he escapes disguised as a Bedouin.

Later, in a touching scene, the sergeant tracks down his men—they’re enjoying a little leisure time along an Algerian beach. Zab narrates: “The old bastard just couldn’t face being left behind … he heard we were shipping out to invade Sicily.” The sergeant walks up to them, and they gather around him in camaraderie and reunification; they’ll never part again.

During the next couple of pivotal years of the war, the sergeant and his squad are involved in the liberation of Sicily, the amphibious assault on Omaha Beach during D-Day, and the eventual emancipation of France. They attempt to do the same in Belgium but are rebuffed back into France.

Each theater of war acts as a separate chapter in the men’s lives and is punctuated by an epilogue of sorts narrated by Zab, which reveals more about the character of each squad member.

The film culminates in the squad’s final action: They are tasked with liberating a concentration camp called Falkenau, located in Czechoslovakia. Some of the film’s final scenes are quite poignant (no spoilers) and cause one to reflect on them long after the ending credits roll.

Although at times morose, “The Big Red One” doesn’t simply wallow in the tragic consequences of war; it shows how surreal things can become when men are pushed to the fringes of insanity. However, the movie eventually ends on a relatively uplifting note, showing that amid all of the chaos and thunder of war, there is always hope for a better future.