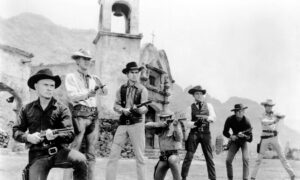 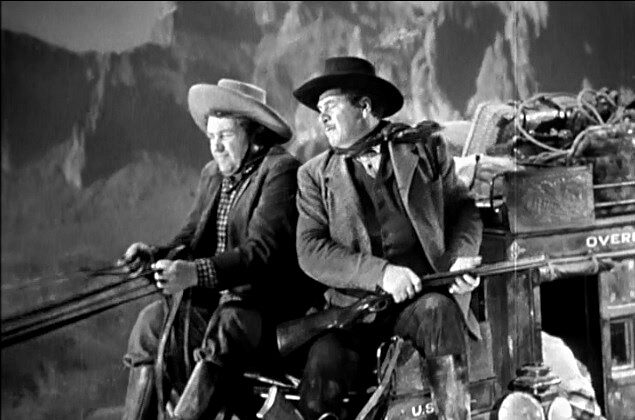 The 1930s marked the beginning of the film industry’s “Golden Age of Hollywood,” which lasted well into the 1940s. Part of that distinction was due to technological breakthroughs. After all, silent pictures began to give way to the “talkies,” color films began to gain ground (although they were still relatively expensive to produce), and many genres, such as crime, drama, and romance, showed a deeper sense of sophistication. However, Westerns were rarely considered “serious” films and largely remained cheaply made and unrefined—until the highly revered film auteur John Ford saw potential in the unrecognized B-movie actor John Wayne, and they teamed up to make 1939’s “Stagecoach,” revolutionizing the Western genre forever.

The film opens in the dust-choked town of Tonto, Arizona. On one of the settlement’s busy avenues, a trail-worn stagecoach pulls up to drop off a delivery and several passengers. A scratchy-voiced man named Buck (Andy Devine) is its driver. He soon departs, and his route includes various stops, eventually ending in the town of Lordsburg.

We are introduced to an assortment of characters from a cross-section of society. Lucy Mallory (Louise Platt) is a heavily pregnant, upper-middle-class lady on her way to meet her husband, an officer in the cavalry; Doc Boone (Thomas Mitchell) is an alcoholic doctor; Dallas (Claire Trevor) is a prostitute whom the law wants out of town; Hatfield (John Carradine) is a Southern gentleman and a gambler; Samuel Peacock (Donald Meek) sells whiskey for a living; Henry Gatewood (Berton Churchill) runs a local bank; Tonto’s Marshal Curley Wilcox (George Bancroft) is an intrepid lawman in search of a fugitive named the Ringo Kid (John Wayne). And finally, we have cavalry officer Lt. Blanchard (Tim Holt).

All travel the eponymous stagecoach for various reasons: Marshal Wilcox wants to ride shotgun with Buck because he believes Ringo wants to exact revenge on a man for killing his father and brother and may be traveling to Lordsburg (later to become New Mexico); Lt. Blanchard and a small detachment of his soldiers have been ordered to provide escort to Dry Fork, one of the stops along the way. The cavalry shows up just before the stagecoach leaves to warn Marshal Wilcox that Geronimo’s war party has been sighted in the area.

Despite the potential danger, Lt. Blanchard informs the group that another cavalry detachment will relieve him and his men and continue to escort the stagecoach into Lordsburg. With a few whips of his reins, Buck sets out into the rugged expanse of the Old West with his six passengers, and the cavalry detachment in tow.

Shortly after leaving Tonto, the group comes across Ringo. Lips chapped and bathed in dirt and grime, Ringo tells Marshal Wilcox that he got stranded when his horse went lame. Although the lawman and the fugitive are on friendly terms, the former has a job to do and takes Ringo into custody.

The stage eventually reaches Dry Fork but discovers that the expected cavalry force has moved on to another town called Apache Wells. Since Lucy was to meet her husband at Dry Fork, she is understandably concerned for his well-being but determined to travel on to Apache Wells.

However, Lt. Blanchard informs the travelers that he and his men are under orders to return to Tonto. Since the expected detachment at Dry Fork isn’t there, the stagecoach must travel on without a military escort.

It’s in the tiny settlement of Dry Fork, far from the more enforced societal moorings of civilization, that we begin to see the increasingly complex characterizations of each traveler. Some assumed roles even turn on their heads.

For instance, whereas Gatewood is initially perceived as a more respectable member of society since he’s in finance, he reveals himself to be underhanded; he’s embezzled money from the Tonto bank he oversees. Conversely, Ringo, who is part of the criminal underclass, turns out to be a relatively decent man. Heck, even the drunkard Doc Boone manages to rise to the occasion when he sobers up to deliver a baby.

But as they travel, the group’s journey becomes increasingly fraught with danger. Will these strangers be able to put their differences aside in order to survive the perils that await them?

With a taut screenplay written by Dudley Nichols (the original story was authored by Ernest Haycox), Ford has created a masterful Western that challenged many preconceived societal roles, especially within a genre that had been filled with plot clichés and rote characters.

“Stagecoach” is a supremely hopeful film that carries a positive message of unity—a breath of fresh air in these highly divided times.