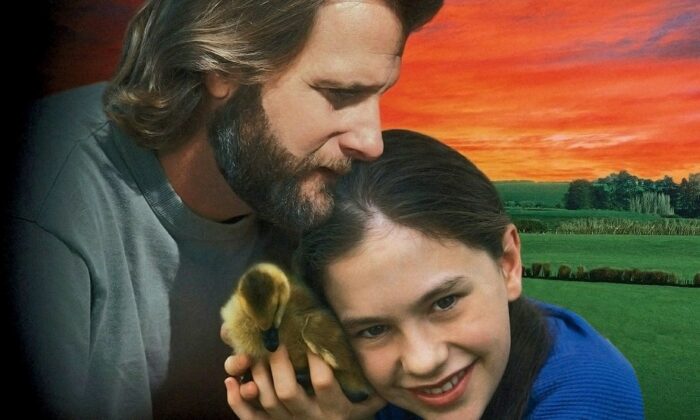 Popcorn and Inspiration: ‘Fly Away Home’: The Special Bond Between Fathers and Daughters

The holiday season is fast approaching, and soon it will be time for some good-natured, family-friendly films to enjoy. After seeing director Carroll Ballard’s 1996 film “Fly Away Home,” I can confidently recommend this as one of the most heartwarming films to share with your friends and family.

The film starts off with a tragic event, however. Amy Alden, 13, and her mother are driving down a road in New Zealand one stormy night. Suddenly, they are involved in a terrible car accident (thankfully, no gore or blood involved), and Amy’s mother doesn’t make it. Amy survives the ordeal, and her estranged father, Thomas “Tom” Alden (Jeff Daniels), steps in to care for her.

Tom’s an eccentric artist, crafter, and brilliant inventor who lives in nice big house on a stunningly beautiful piece of land in Canada. His house is also his workspace and, therefore, he has a lot of tools and materials all over the place.

Tom finds it awkward, at least initially, to try to reach out to the daughter he hardly knows but does so anyway, and it becomes clear that he loves her. But when Tom’s girlfriend Susan Barnes (Dana Delany) shows up, Amy withdraws a bit more. Understandably, she’s still grieving the loss of her mother.

Having a hard time adjusting to her new life, Amy wanders the surrounding lands, and the flora and fauna of the picturesque environs begin to have a therapeutic effect on her. After greedy land developers destroy some of the local habitats close to Tom’s home, Amy finds a nest of goose eggs left behind in the wake of the destruction. She quickly hides and incubates the eggs in Tom’s barn.

Soon, the eggs hatch, and the orphaned goslings latch on to Amy—interpreting her as their mother in what is later described as “imprinting.” Overwhelmed by having to help raise the dozen or so goslings, Tom seeks the help of Animal Regulation officer Glen Seifert (Jeremy Ratchford), who oversees the region. But when Seifert tells Tom and Amy that the birds’ wings will have to be clipped—thereby rendering them flightless—and tries to demonstrate the process on one of the chicks, both father and daughter eject the official right out of the house.

Things seem touch-and-go for a while, but as Tom and Susan follow through on their promises and keep their word to Amy, she eventually begins to trust them on deeper levels. They’re also very upfront and truthful with Amy about everything—such as when Tom tells Amy that, unless she intends to hold the growing geese as prisoners in the barn, they’re going to have to migrate south at a certain point.

But he also tells her that with her help, both father and daughter together might be able to figure out a way to enable the geese to make their trip, and their relationship begins to take flight—both figuratively and literally.

The literal flight is possible because Tom and his friend Barry (Holter Graham) have long been experimenting with ultralight aircraft. After many blunders with test pilot Tom as the stunt dummy, and with help from Tom’s brother David (Terry Kinney), they eventually discover a model that affords a relative amount of safety for the trip.

One of the things that I was initially afraid of, after reading the film’s synopsis, was that this might turn into one of those overly sappy, cornball fests. But luckily, nothing could be further from the truth. The way in which the relationships between the characters unfold feels natural and genuine, as opposed to forced and contrived.

Tom’s not a perfect father, but he tries his best with what he’s got, which is a powerful message for many men who grew up not knowing how to be a father—let alone knowing how to love in the first place.

Jeff Daniels disappears into his role as the estranged father who gradually finds ways to connect with his traumatized daughter. Likewise, the circumstances that they (and the characters around them) find themselves in aren’t perfect either, but they all find strength within their increasingly warming relationships.

Paquin is also outstanding as young Amy and never overacts in her scenes—offering just enough emotional output for us to see what’s she’s going through.

There’s a subplot involving a greedy land developer who is tearing up the countryside, but it’s merely background noise—whether you are an environmentalist or not, it doesn’t matter. “Fly Away Home” is a lovely film because it shows us some of the important things that can bring us together, instead of what divides us. It also showcases the special bond that fathers can have with their daughters. These are fantastic messages to share with others as we look forward to the festive season ahead.