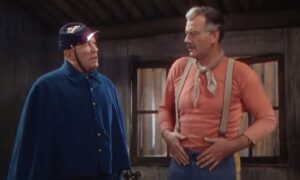 Popcorn and Inspiration: ‘Fearless’: A Rousing Drama for Today

When I first recalled director Peter Weir’s 1993 film “Fearless,” I must have subconsciously known how timely it is. And after watching it for the first time in probably over a decade, I see parallels to many of the recent tumultuous events. In many ways, “Fearless” plays like the cinematic gestalt of recent times. After all, 2020 was a year that many would like to forget even happened—with all of the tragic deaths, increased political upheaval and divisiveness, viral hysteria, and so on.

The film opens with middle-aged architect Max Klein (Jeff Bridges) walking calmly through a cornfield, as an ethereal score by composer Maurice Jarre hums in the background. Max is holding a young boy’s hand and carrying an infant.

As Max emerges from the field, we see that he is leading many who have just survived a horrific commercial airline crash. Crash rescue teams scramble all around frantically, but Max displays an odd air of tranquility and peacefulness, despite the fact that it is later revealed his best friend Jeff Gordon (John de Lancie) perished in the crash.

At the opposite end of the spectrum, a woman named Carla Rodrigo (Rosie Perez) is being hauled out of the still-dangerous plane wreckage by a pair of men. She is frantically clawing away at them in a desperate effort to get back to the plane’s damaged fuselage in order to find her baby who was ejected from her grasp in the crash. A tiny burned shoe can be seen amid the debris, signaling that the worst has happened.

Seemingly in a state of deep shock, Max finds the mother of the baby he is carrying and hands the child off to her. He then rents a car and drives to Los Angeles to visit an old flame, Alison (Debra Monk). As they sit eating at a local restaurant, Max orders strawberry pancakes. Surprised, Alison notes that Max has always been allergic to the “forbidden fruit” and almost died from eating them as a child. But he shrugs it off and says that now “I’m past all that.”

Indeed, due to the plane crash, Max’s life seems to have undergone a transcendental shift and displays characteristics of a messianic figure. He is completely forthright and honest with people and has conquered all of his fears. For example, when the airline tracks him down (with the help of the FBI) and offers him a train ticket back to his home in San Francisco, he tells them that he’d rather fly back instead, having overcome his fear of flying.

During his flight, the airline pairs him up with psychiatrist Dr. Bill Perlman (John Turturro), who specializes in treating trauma victims. Since Max believes that he has entered a transcendent state, he doesn’t think Dr. Perlman can wholly understand his transformation.

When Max returns home, his wife Laura (Isabella Rossellini) and young son Jonah (Spencer Vrooman) are ecstatic to see him. But it doesn’t take long for them to figure out that something is vastly different about Max’s personality. When Max and Laura have a private moment together, she asks why he didn’t immediately let her know he was alive. He responds, “I thought I was dead.”

While things begin to fracture on the home front due to Max’s somewhat detached nature toward his family, he is hailed as “the good Samaritan” by the media—having comforted other passengers during the crash landing and led many of the survivors to safety.

Dr. Perlman believes that Max may be able to help Carla, who lives with her family in New York. When Max meets Carla, he finds that she is wracked with survivor’s guilt because she wasn’t able to hold on to her baby during the crash. Max and Carla strike up an unusual chemistry, and he makes it his duty to save her, just as he did some of the other survivors.

Needless to say, Laura becomes jealous of the attention that Max shows to Carla, and their family life becomes increasingly unstable. At one point, Laura finds Max in the famous scene that the movie poster depicts—fearlessly dancing on the rooftop ledge of a tall building.

As Max’s progress with Carla begins to taper off, will he still be able to save her from her seemingly endless despair? And who will save Max from his own new, strangely exalted self?

As a new year begins, this film encapsulates what many would consider a “crashing” of the economy, of certain freedoms and civil liberties, leading to an overall sense of worldwide turbulence. However, just as the film ends on a positive note—with regard to a return to normalcy—so too can all of humanity hope for a semblance of normalcy. As the saying goes, “Don’t count the days; make the days count.”