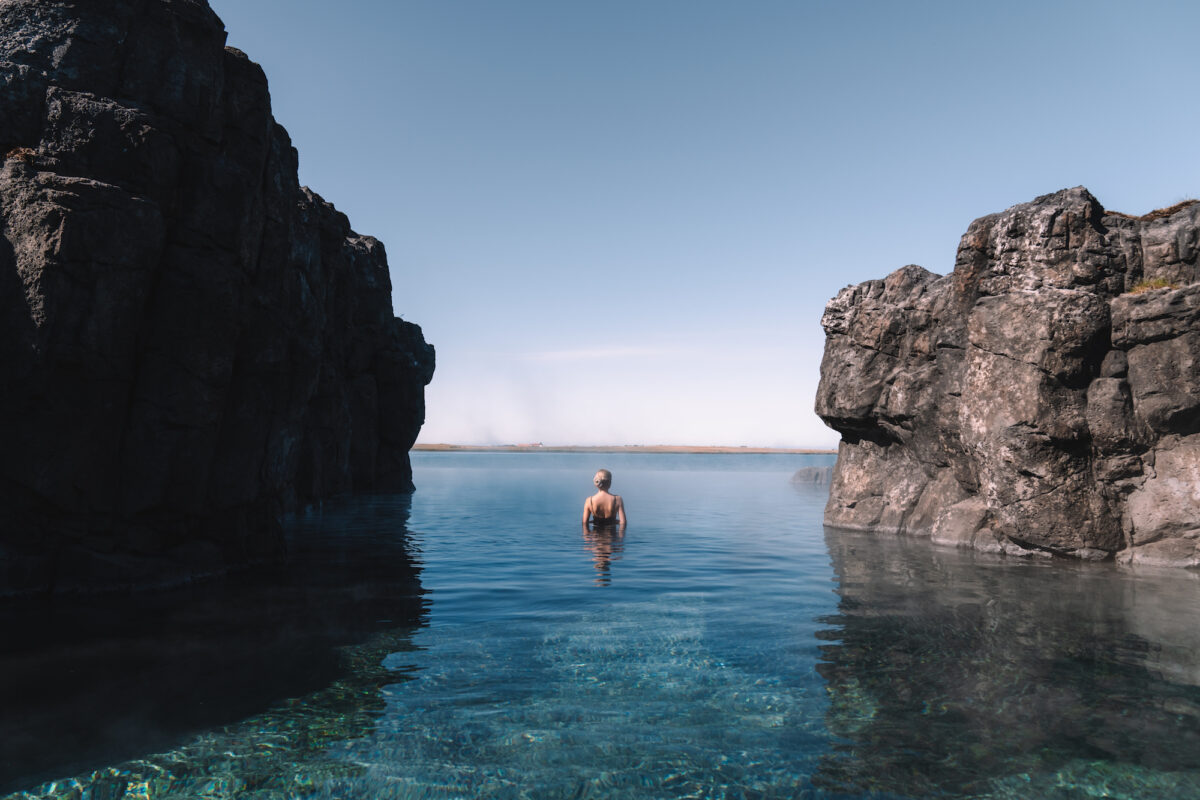 If you’re returning from a trip to Iceland, people will usually ask you one thing: Did you visit the Blue Lagoon? This massive, milky-blue pool has become an icon and an absolute can’t-miss spot—one of the country’s most popular tourist attractions. In a typical year, more than a million people come here for a soak.

Visitors arrive, shower, and wade into the steaming water, covering themselves with silica mud from the bottom that is said to have healing powers. A photo—cold beer in hand, a mask of white mud on your face—is an essential keepsake from your visit. The pools maintain a temperature of about 100 degrees Fahrenheit and are actually man-made. A nearby power plant taps superheated underground water from a lava flow to run its turbines. That water is then run through a heat exchanger to provide warmth for homes and businesses in Reykjavik. Then, it runs into pools that form the Blue Lagoon. It all came about by accident, really—the power plant opened in 1976, and by the early 1980s, people with skin conditions came to the then-unregulated runoff pools and reported good results. A more formal complex opened in 1987.

It is, by far, Iceland’s most famous geothermal wonder, and a perfect place to take a bath. But on any visit to Reykjavik, the world’s northernmost capital, a city of just 130,000, you’ll have so many choices for a soak. As a great lover of baths myself, I immersed myself in hot pools all across town on three separate visits here, including one this summer.

This pleasant, warm water that flows all over town is a happy byproduct of the great violence taking place just below the surface. Rising from the Mid-Atlantic Ridge, Iceland sits directly on a divide between the Eurasian and North American continental plates. It’s a land of fire and ice—covered in glaciers, shot through with lava tubes, and sporting more than 200 volcanoes. Mud pots bubble. Geysers erupt. In addition to being fascinating, all this power from just below the earth’s surface is also useful in providing clean, low-cost electricity throughout the country, even heating Reykjavik’s sidewalks in the winter.

Icelanders have enjoyed their hot pools since long before the advent of the Blue Lagoon. The earliest settlers, Norwegians who came to the island in the 9th century, quickly discovered natural hot springs and used them for baths and washing clothes. In the 1200s, renowned historian Snorri Sturluson built his own thermal pool; the trend quickly caught on amongst others in medieval Iceland, who soon built whole complexes for themselves. Throughout the centuries, Icelandic farmers weathered harsh, long winters by retreating to their own pools, which were pleasant places for cleaning and just relaxing.

The tradition remains strong in Reykjavik, a small, dynamic, modern city. Walking around here, everything feels vaguely Scandinavian, including the language—Icelandic is essentially the most original form of the Scandinavian spoken and brought over by those early settlers. “We’re very close to the old Norse,” one man told me. “We’ve been here on this island, isolated, for more than a thousand years!”

With 17 public pools across town, locals gather here for reasons beyond the therapeutic and hygienic. Like the Finnish sauna or the Japanese onsen, these are social hot spots as well. Retired Icelanders come in the morning to trade gossip and talk politics. Families bring their kids, happy to let them burn off steam in the steamy waters. Couples spend their date nights here.

On a bright Friday evening, I simply followed the steady stream of people carrying their swim clothes, in fabric bags and backpacks, to Sundhöllen. Built in 1937, it’s the oldest public pool in the city. It was designed by Guðjón Samúelsson, one of the country’s greatest architects, who was also responsible for the National Theatre and the iconic Hallgrímskirkja, a hilltop glacier-inspired church that’s visible from almost anywhere in the city.

Inside, I prepared to soak. Icelanders are fastidious in their preparations for public bathing. Reykjavik’s official tourism website even includes a step-by-step Q&A guide, written in a tone that reflects the local wry, dry sense of humor. (Question: Do I have to shower naked? Answer: Yes, butt naked!)

Fully showered, I emerged from my changing cabin in my swimsuit and proceeded to navigate the saunas and hot pools, some of which were on a rooftop. The facilities were recently renovated, and everything felt fresh. Around me, my fellow bathers chattered away in the ancient language of Vikings.

I made my way through a number of other public pools across the city, but decided against making my final stop at the Blue Lagoon, which is actually a decent drive from the capital and out near the airport in Keflavik. Instead, I opted for the newly opened Sky Lagoon, much closer to town, reachable by a public shuttle that picked me up right next to my hotel.

Again showered and changed, I descended into the steaming water through a cave-like opening in the black, volcanic stone walls. Situated in an industrial zone about 15 minutes from central Reykjavik, the walls and turf exterior create an immersive environment, transporting you to a land where all you care about is enjoying thermal, volcanic joys.

I grabbed a glass of wine from the bar. Later, I proceeded through their seven-step “spa ritual,” which includes sauna, steam room, body scrub, cold plunge, and a warm, waterfall shower.

But first, I paused at the infinity edge of the pool, with the view, which designers call a “window on Iceland,” spread out before me. Before me spread the cold waters of the North Atlantic, the buildings of central Reykjavik, and planes descending at the city’s small airport as a reminder that my departure to points beyond awaited me the next day. But for the moment, I was happy to stand there, steam rising everywhere, my glass still half full, happy for my last, glorious soak of this trip to Iceland.

Getting Around: Taxis here are very expensive, so if budget is a concern (at all), take bus shuttles to the Blue Lagoon, Sky Lagoon, and other pools. They can be booked through Reykjavik Excursions.

Take Note: If you’re visiting the city’s public pools, make sure to bring your own towel and other bathing basics. For a guide on what to expect, consult: VisitReykjavik.is.