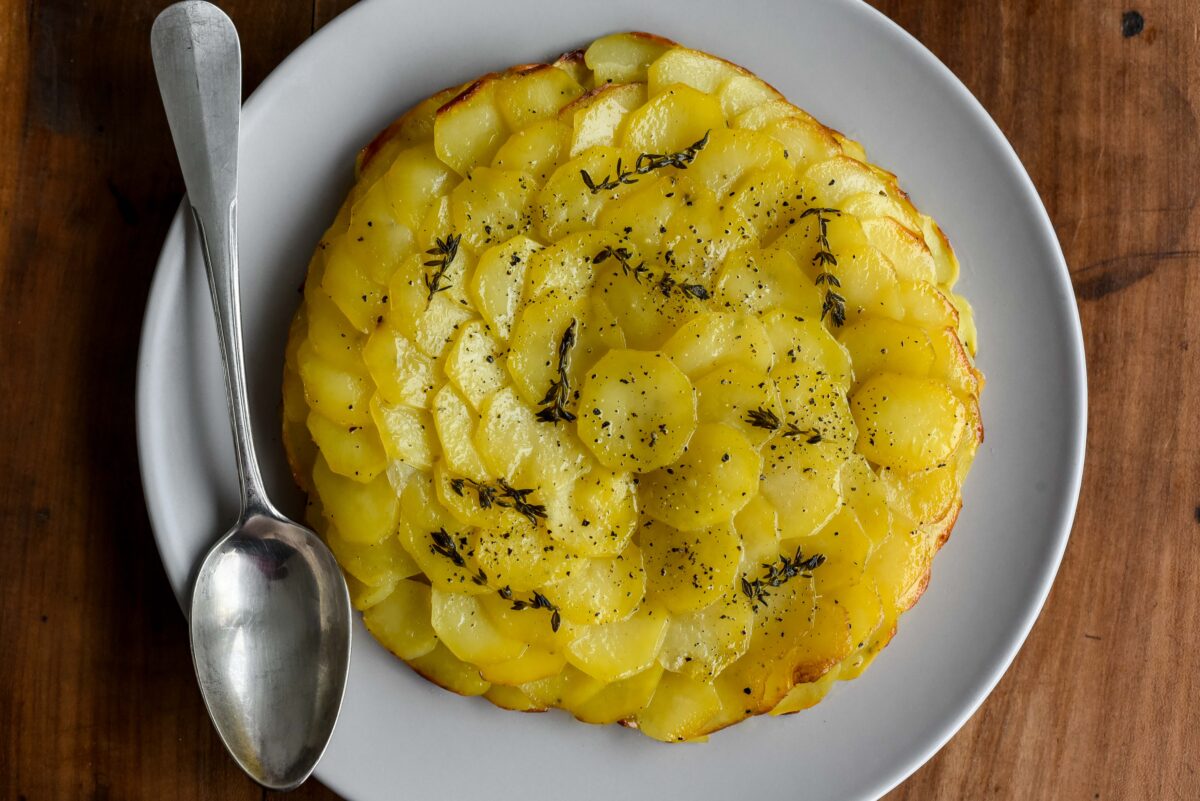 Pommes Anna Is a Spectacular Way to Serve Potatoes

Follow the French to transform three basic ingredients into a show-stopping side
BY Audrey Le Goff TIMENovember 2, 2022 PRINT

A classic from the French repertoire, pommes Anna features thinly sliced potatoes that are layered in an eye-catching circular pattern and baked in a generous amount of butter. The result is a melt-in-your-month “potato cake” with crisp golden edges that is then flipped upside down onto a serving plate.

It’s an easy, yet show-stopping side dish for every holiday season.

Origins of the Dish

Pommes Anna is said to have been created by Adolphe Dugléré (1805–1884), a chef trained by the highly recognized Marie-Antoine Carême, the founder of French “haute cuisine.”

In 1866, Dugléré became the head chef of Café Anglais, one of the most fashionable Paris restaurants in the late 19th century. The restaurant’s private lounges welcomed a wealthy clientele, accompanied by “cocottes,” the name given to the high-class singers, comedians, and courtesans of the era. Rumor has it that Dugléré named pommes Anna after one of them—some say Anna Damiens, better known under the stage name Dame Judic, while others argue that it was, in fact, courtesan Anna Deslions who inspired the chef.

Despite its luxurious background, taste, and look, pommes Anna is simply an inexpensive dish made of potatoes, butter, and salt. With only these few simple ingredients and an understanding of a few cooking factors, you will be a master of pommes Anna in no time. Here’s a breakdown.

Pommes Anna is traditionally made in a “cocotte Anna”—a low-sided copper cocotte that’s nowadays rare to find and quite pricey. Instead, modern cooks prefer to opt for either a classic circular baking dish or a cast-iron skillet, both of which have their own benefits.

A skillet, which retains heat better, will cook the potatoes slightly faster and create a nicer crunch on the outside of the potato cake. On the other hand, a baking dish will cook the potatoes slower, but will also spread the heat throughout the dish better, making for less brown edges in exchange for a more tender, melty texture. If using a baking dish, you can bake the cake for 1 hour. If using a skillet, adjust the baking time to about 10 minutes less.

Since they’re the stars of the dish, choosing the right potatoes is of the utmost importance. Opt for firm-fleshed baking potatoes that will release a high amount of starch while baking, which helps to hold the potato cake together.

In North America, two varieties are recommended: fluffy russets, which have the most starch, or Yukon Golds, which hold their shape well and bake up very tender. For either, one rule applies: Don’t rinse the potato slices! You want to keep all the starches inside so they slowly release while baking and create a well-binded cake that won’t fall apart.

Two factors come to mind for the butter. First, choose your favorite unsalted butter, as this gives you more control over how much salt you introduce to this dish. Second, it’s highly recommended to make clarified butter. This process calls for removing the milk solids from the butter, as those can burn easily and alter the taste and texture of the potato cake later on.

An 8- or 9-inch circular dish or skillet is ideal for this recipe. For slicing the potatoes, you can use a mandoline or a very sharp kitchen knife. Although stepping away from tradition, my recipe calls for thyme and freshly ground black pepper for extra flavor, which you can choose to include or not. Pommes Anna is wonderful served beside a roasted turkey or roast beef—making it a perfect side dish for the holiday season.

Prepare a large bowl filled with water and the tablespoon of lemon juice. Peel the potatoes and place them in the water as you go to prevent them from browning.

Melt the butter over low heat in a small saucepan. Skim off the foamy milk solids that rise to the top.

Cut the potatoes crosswise into 1/8-inch-thick rounds with a mandoline or sharp knife. Place potato slices in a large bowl, season with salt and pepper, and toss to coat evenly.

Pour half of the clarified butter on the bottom of your skillet or dish. Scatter the thyme over the butter.

Arrange the potato slices at the bottom of the pan in a spiral pattern. Start in the center and overlap slices by half. When the bottom of the pan is completely covered, repeat with a second layer and so on until all slices are used. As you go, occasionally press with one hand onto the slices to bind them as much as possible.

When finished, pour the rest of the clarified butter onto the potato slices. Season with more pepper, if desired.

Place in the oven (uncovered) and bake for 1 hour. Then, turn the oven to broil on high and broil until the top is golden brown, about 3 to 5 minutes.

Carefully take the dish out of the oven and transfer it to a cooling rack. Run a thin knife around the edges and shake the pan to ensure the cake doesn’t stick. Using oven gloves or kitchen towels, place a plate on top of the dish, hold the plate and skillet firmly, and flip. Serve while hot.

Audrey Le Goff
Audrey Le Goff is a French food writer, photographer, and creator of the food blog PardonYourFrench.com, where she shares recipes and stories from her beloved home country, France. She is the author of the cookbook “Rustic French Cooking Made Easy” (2019). She currently lives in Niagara, Canada. Follow her on Instagram @pardonyourfrench.
SHARE
Friends Read FreeCopyFacebookTweet
SHARE
Friends Read FreeCopyFacebookTweet
You May Also Like