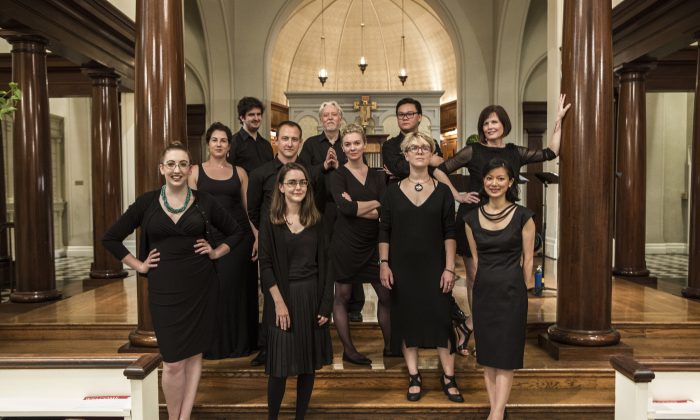 For tenor Tom Jim Solon, who co-founded New York-based Canticum Scholare, early music is a miracle in many ways.

The very fact that medieval, Renaissance, and baroque music has survived for hundreds of years is astounding, Solon explained on July 21. Without electronic copies and without backup systems, this music has somehow missed fires and floods, escaped mishandling and misadventures, and come down to us as originals on parchments—handwritten by its composers.

With our reliance on computers and compositional apps today, it’s hard to conceive that these pieces were written in the first place, he said. The hours and hours of tedious labor to compose complete Masses seem unfathomable to us.

They were created for the glory of God and out of love.
— Tom Solon, co-founder, Canticum Scholare

And then there is the point that most music lives for only about 25 years. Today, if a piece survives beyond its own generation, we consider it a classic of its particular genre. It’s a miracle that 400- and 500-year-old manuscripts are not only extant, he said, but still played at the Vatican and in some Catholic churches.

In this sense, the works of early music can be considered classics. While technically this music predates the era that scholars term as classical, Solon explained that the pieces are classics simply for having endured for centuries.

But more than its hardiness, its longevity, or even the miracle of its birth is the effect this music has on us.

It sets up a feeling of the divine, Solon said. As it reverberates in churches and cathedrals, the venues for which it was written, it makes people feel closer to God. It is a “catalyst for a spiritual experience,” he said.

For Solon, these classics are important because of their profundity. This music “acts as a bridge to transcend man to the level of God. It is a vehicle to set our souls and minds away from the worldly, and to focus on God’s love for us,” he said.

When people today hear Canticum Scholare, “a professional a cappella ensemble … specializing in vocal music of the Renaissance and baroque eras,” according to its website, they are transported by its beauty, simplicity, and by how it stirs the soul.

“I’ve had people come up to me after a performance, young and old. All were inspired by the music, and they are also bewildered that they have not heard more of it,” Solon said.

Polyphonic Music, Then and Now

The profundity of early music is intentional, Solon explained, because it was all written as sacred music.

The worldview of the era’s composers was such that they poured their whole souls into the work, with no other benefit in mind but the salvation of their souls and those of others. Whole Masses were created with this intention.

“They were created for the glory of God and out of love,” Solon said.

The structure of much of early music was simple. Pieces could include a line sung alone, termed monophony, or choral pieces with four or more parts in which independent melodies were sung simultaneously. Solon describes this polyphonic music as a “symbiotic sea creature.”

The quality of the singing matched its sacred intention; it is often described as sounding pure. Singers use a vibrato-less or “straight tone,” close to the sound of children singing—perhaps the reason purity is ascribed to it.

All were inspired by the music.
— Tom Solon, co-founder, Canticum Scholare

Scholars aren’t sure how the straight tone developed. Nor are they even sure that this quality actually describes how singers at the time sounded, Solon explained. Manuscripts of polyphonic music of the era did not include markings to indicate interpretations.

“In the 1800s and 1900s, composers wrote down exactly what they wanted you to do—a forte, a diminuendo. Polyphonic music is actually much more challenging to sing because you need to interpret how to sing things,” he said.

Musicians base the vibrato-less tone on the fact that instruments of the time were played without vibrato. Instrument strings, for example, were made from sheep gut, which would break if played with vibrato.

Pure, a cappella voices, each layered on one another, each following its own melody, make the polyphonic sound unmistakably associated with the era, Solon said. In the wedding scene of the movie “Queen Margot,” for example, composer Goran Bregovic used polyphonic music to set the scene in 1572. Viewers know exactly what time period they are in.

Some composers have moved beyond using this ancient sound to recreate the past. Some like Eric Whitacre use it to create new music. Whitacre is perhaps the most famous composer to revitalize the polyphonic sound, and much of his hauntingly beautiful music maintains the feeling of sacredness.

While these composers today are keeping the tradition of polyphonic music alive with new works, Solon took another path—to keep early music itself alive.

Like most classically trained singers, Solon studied opera. He received his Bachelor of Music degree in Vocal Performance from the Manhattan School of Music. He studied with Ted Puffer, who founded and directed the Nevada Opera.

But Solon never really took to opera. He felt it lacked depth because all of it is secular.

As Solon’s musical journey unfolded, he sang with various prestigious choral programs in New York City, but his passion for early music and choral music drew him to collaborate with his colleague, Jin Krista Kang, in establishing Canticum Scholare.

The professional a cappella ensemble is based in New York and specializes in Renaissance and Baroque vocal music. Its mission is simply to promote the public’s awareness and appreciation for this rarely heard music.

If early polyphonic music is not played, Solon said, “these miracles will disappear behind plexiglass or be forgotten in the dustbin of history.”