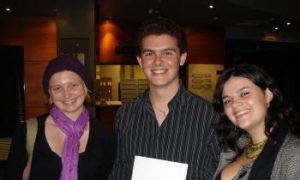 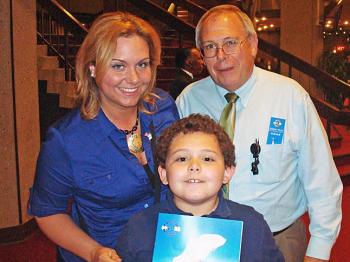 Owing its claim to fame as being the capital of California, Sacramento has been called "America's Most Diverse City" by a 2002 TIME Magazine report.

Sacramentans of all backgrounds flocked to the show, including business and financial executives, artists, health professionals, and even a California State Assemblyman.

Among the audience at Wednesday night's Shen Yun performance were Tiffiny Ruegner, her father Johannes, and her son Gabriel.

Ms. Ruegner, a political analyst, called the show "lovely" and added, "I loved the colors. It was vibrant, it was beautiful."

The dancers were "very graceful and traditional," she said.

Shen Yun's dancers are extensively trained in classical Chinese dance, which is one of the most comprehensive dance forms in the world, according to Shen Yun's website.

The New York-based performing arts group's dancers must master a collection of difficult twists, turns, jumps, flips, and spins which they incorporate into the show's many pieces.

While some pieces feature historical elements of Chinese history, such as the Terracotta warriors of the Qin dynasty, others examine contemporary Chinese society, including the treatment of practitioners of the spiritual discipline Falun Gong by the Chinese communist regime.

Both father and daughter noted that the theme of freedom of belief permeated through Shen Yun's dances.

"I thought that was a good thing to see," said Mr. Ruegner, a self-employed food broker. "Everything was well-done."

"I liked that [the Chinese people] were appreciative of having freedom," Ms. Ruegner said of the Shen Yun pieces that features the suffering of Chinese people who ask for freedom of belief, but are continually oppressed.

She added on the Chinese authorities' suppression of freedom of belief: "It still happens in China today. And that's unfortunate."

Founded in 2006, Shen Yun Performing Arts has as its mission to use dance, song, and music to revive traditional Chinese culture and arts, which has been quashed by decades of rule by the communists.

"I thought this was a good platform for them to use to make people aware of what's going on in China and also teach us a little bit about culture in China," Ms. Ruegner said.