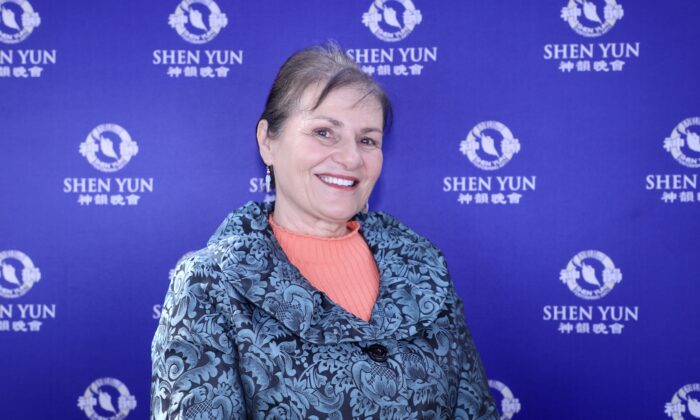 MELBOURNE, Australia—When Shen Yun Performing Arts came to the Palais Theatre in Melbourne, Irena Grainge, a soprano and actress, was looking forward to attending an amazing performance with her friend.

“And I am enjoying it very much,” said Ms. Grainge, who performs in films, television, and opera both in Australia and internationally.

“I love the precision. I love the colour,” she said.

As an opera singer, Ms. Grainge said she appreciated Shen Yun’s live orchestra, as it has always been part of her life as a soprano. “And it’s fantastic,” she said, adding that she loved the intermingling of the Eastern and Western harmonies.

The Shen Yun Orchestra is known for its unique blend of traditional Chinese and classical Western instruments, and plays melodies from all-original compositions.

Also in Shen Yun’s repertoire is a virtuoso performance by a soprano who sings “Dafa Leads Back to Heaven.” The song speaks of the importance of holding on to our traditions and living a life of virtue and moral values.

Shen Yun’s sopranos sing in the bel canto style, a traditional and classical technique that originates from ancient Chinese theatre and European opera.

“[The] message was fantastic,” Ms. Grainge said. “And I’m glad we could understand what she was talking about,” she said, referring to the lyrics from the song that were projected on the backdrop for the audience to read.

“[The message was] very loving and peaceful. And we are really appreciative that sort of message being out there for us to hear,’ she said.

It was an appropriate message in today’s world, Grainge added, referring to the current conflict in Ukraine.

“Being Polish, having relatives in the eastern part of Poland next to the Ukraine border, it resonated with me very strongly,” she said of Shen Yun. “And I’m really, really hoping that the message [will go] around the world and everybody will listen to it.”