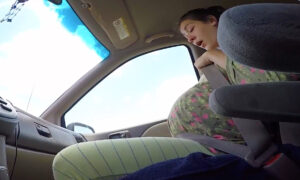 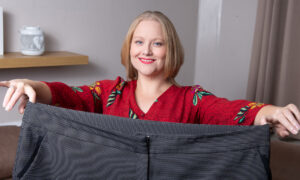 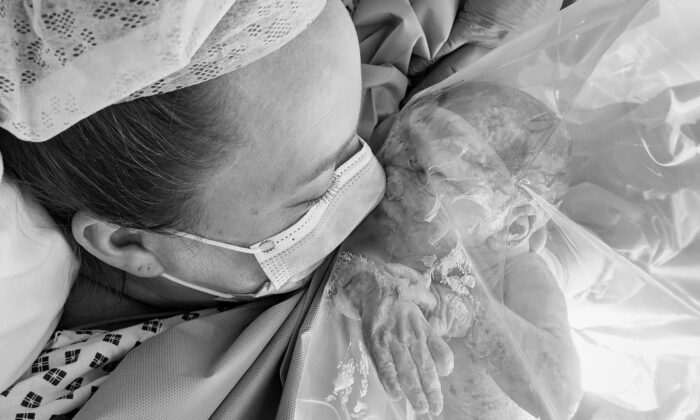 A poignant image of a mom in the United Kingdom sharing her first kiss with a newborn baby behind a PPE screen has beautifully captured the stark reality of giving birth during the lockdown. Ali, 34, and her husband, Leigh Harris, 33, never expected to have such a different pregnancy when they fell pregnant with their son Indy in August 2019.

However, soon after Covid-19 enveloped the world, the expecting parents realized how different this phase was going to be compared to their previous two pregnancies.

“As soon as the virus started to get really big we knew Indy’s birth was going to be different,” Ali, who runs a newborn, child, and family photography business from her home in Branston near Lincoln, told Caters News Agency. “We have two other children so we were ready for our third, but everything changed pretty swiftly.”

Things were impacted quite a lot due to the pandemic. When Ali was seven months pregnant, the lockdown hit and it was really scary. The mother, who was working till then, had to even shut down her business. However, the parents were able to receive some government support, according to Lincolnshire Live.

Additionally, the parents, who support and rely on each other, couldn’t go for appointments together due to stringent restrictions put in place amid the pandemic.

As pregnant women were considered in the high-risk category of the virus, Ali remembers being “scared” to even leave the house.

“I went to a scan on my own and I remember being in a waiting room and someone was coughing a lot and you just instantly became terrified,” Ali told Caters News Agency, recalling one such moment.

Indy’s birth was incredibly different but special for the parents. Leigh was allowed to go into the hospital for six hours before Ali went in to have a C-section.

“During the C-section there was a clear drape between me and the baby and on the ward, there were curtains around the bed separating us from the other moms,” Ali told Lincolnshire Live.

Though Ali admits it was strange to see Indy being born through a clear screen, the new parents were just glad they had that opportunity.

When Indy was placed for the first time on Ali’s chest for skin-to-skin behind a plastic sheet, the moment was incredibly special. The new mom gave a kiss through the protective screening and her mask. Luckily, Leigh, who was equipped with a camera, snapped a shot, which has now caught the attention of people in the UK.

The incredible photo, titled The First Kiss, was among the 100 photos chosen for an online National Portrait Gallery exhibition called Hold Still. The community project, led by the Duchess of Cambridge, received 31,000 entries and was launched in May 2020 to depict a collective portrait of life in the UK during the lockdown.

Alluding to the special image, Leigh said: “I wasn’t paying any attention to the pictures I was taking, I just wanted to keep snapping away so that we could look back on such a special moment.”

For Ali, the picture was really “poignant.”

“The image is just the icing on the cake, we’re thrilled we have that moment on camera, and seeing all the PPE is a real reminder of the world we’re currently in,” Ali said. “We were worried Indy wouldn’t have a special birth with family doting on him and everyone meeting him, but now we realize he’ll have the best story to tell out of all three of them.”