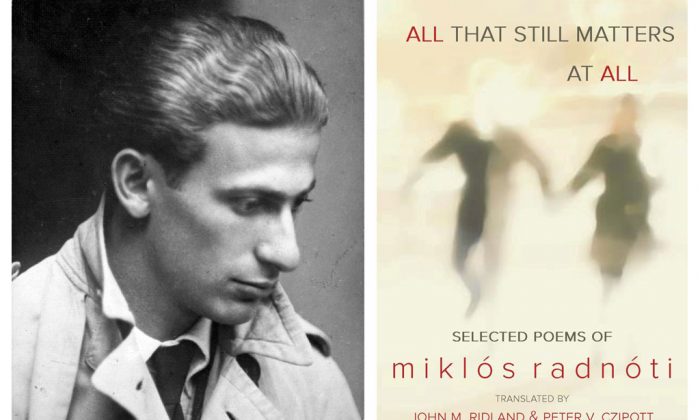 Left: Miklos Radnoti in 1930. (Public domain/Wikimedia Commons) Right: Cover of the book "All That Still Matters at All," by Miklos Radnoti. (New American Press)
Arts & Culture

Poetry of the Holocaust Gets New Translation

In 1944, on a forced march from Serbia to central Hungary, poet Miklos Radnoti was shot to death and his body dumped in a mass grave.

A year and a half later, the exhumation of his remains revealed a small notebook in the front pocket of his overcoat. It contained five poems—his last.

These poems are among the few surviving works of literature written during the Holocaust. Now they are part of “All That Still Matters at All” (New American Press, 2014), a new volume of Radnoti’s work that John Ridland, professor emeritus of English at University of California–Santa Barbara, and Peter Czipott, a California-born scientist of Hungarian descent, have translated.

“In Hungary Radnoti is considered one of the two or three best 20th-century poets.”
— John Ridland, professor emeritus of English, UC Santa Barbara

Born into an assimilated Jewish family in Budapest, Radnoti converted to Catholicism in 1943 in response to the anti-Semitism that two decades earlier had begun to take hold in Hungarian society.

Considered a Jew despite his conversion, as he knew he would be, he was conscripted by the Hungarian army and assigned first to a labor battalion at the Ukrainian front and then to copper mines in Serbia. When Yugoslav partisans advanced, Radnoti’s group of 3,200 Hungarian Jews was force-marched back to Hungary. Few of them made it.

“They were undernourished to begin with, and were being forced to march quickly,” Ridland explains. “Anyone who fell down was shot and buried.”

“In Hungary, Radnoti is considered one of the two or three best 20th-century poets,” said Ridland, “not only for the tragedy of his life but for the lyrical excellence of his poems. His reputation was very high even before his terms of slave labor and his murder.”

“All That Still Matters at All” chronicles Radnoti poetry—and, in many ways, his adulthood—beginning with the bright and optimistic “Hail to the Sun!” which he wrote in October 1929.

As time passed—and Radnoti watched his world unravel—the work became dark and somber. “The poems themselves tell the story of his life,” said Ridland.

“His sufferings were horrendous,” Ridland and Czipott write in the translators’ notes, “and yet he was able to make great poems out of them. The poems were dark and painful, and it is no wonder the literary world has pictured their author as a tragic victim.

“Yet we agree … he should not be viewed purely as a subject of Holocaust studies, and so we have begun with some of the earlier poems, carefree love lyrics from a time of joy, as the last ones are often love poems from the depths of sorrow and despair.”

While Ridland describes Radnoti as one of the key literary chroniclers of the Holocaust, he emphasizes that Radnoti body of work is much broader—temporally as well as emotionally—than what he produced during those war years.

“In translations of selected poems of Radnoti, the emphasis usually is on the last poems, the last years, and the tragic nature of them,” Ridland said. “But if you look to the beginning, it’s very happy.”

The translations that comprise “All That Matters at All” were “enthusiastically endorsed” by Fanni Gyarmati Radnoti, the poet’s wife, muse, and literary executor, who died in 2014 at the age of 101.

From the University of California–Santa Barbara via Futurity.org