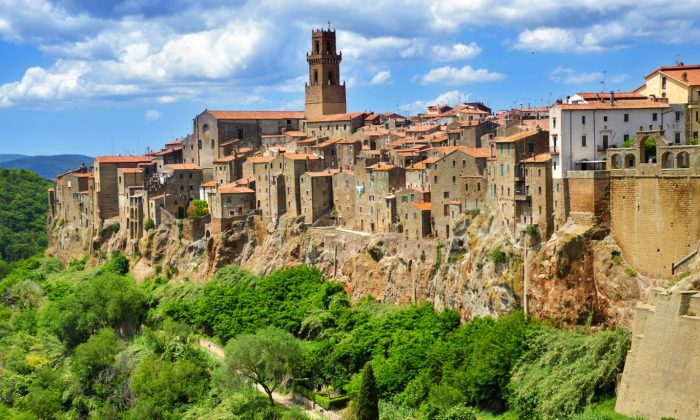 The whole region of Tuscany is without a doubt idyllic. Picturesque villages, the most visited and historically important towns and cities in the world (for example: Florence, Siena, Pisa), beautiful beaches, and coastal areas. There’s no need to add anything more. However, in the middle of all this, a bit off the beaten path lies Pitigliano. A little village built atop of a massive cliff among the green rolling hills, fields, and woodlands. Peaceful and quiet, it offers some kind of an escape from the noisy tourist crowds.

How to Get to Pitigliano

Europe has an excellent network of public transport connections, but Pitigliano seems to be an exception from this rule. The best advice would be to drive there. It is located south of Florence (216 km/134 miles), 111 km from Siena (69 miles) and 240 km from Pisa (150 miles). Siena is on the way from Florence so you could stop there to visit this beautiful town going down south to Pitigliano.

I wasn’t lucky enough to be able to drive there so I had no other choice but to use the damn public transport. There is no direct connection from any of the above-mentioned cities, either bus or train.

My time was really limited in Tuscany but I was really stubborn to see Pitigliano at least for a couple of hours. The best option to visit Pitigliano is to go to the town of Grosseto. After all day that I spent in Siena, in the evening, I took a bus to Grosseto (around 8 EUR/10.50 USD) and stayed there overnight. The next morning, I jumped on another bus directly to Grosseto.

I arrived in Pitigliano very early morning, when the first sun rays started illuminating the village. It looked really stunning. The mighty cliff seemed to have risen unexpectedly out of nowhere among the beautiful lush green scenery. The brownish houses, squeezed tightly on top, together with the rocky wall created a phenomenal contrast with the surroundings.

The climate was clearly cooler than in the rest of Tuscany, and, even though it was June, I still felt cold until the sun heated up the air.

Pitigliano is really small and one day is more than enough to visit everything. There are two main streets around which all the buildings and houses are built. Just follow one of them and you will reach the end of the village on the other side. If you have a chance, do stay overnight so you can admire both the village and the cliff beautifully illuminated after dark.

You are in Italy, so it goes without saying that you will encounter numerous historical buildings, churches, and monuments. First of them, right at the beginning of Pitigliano, is the Medicean Aqueduct. It was constructed in the 16 century to get water to the town from the nearby river. Further on, right beside the aqueduct you will find the Archeological Museum.

Just before you enter the village, note the Palazzo Orsini at the Piazza Garibaldi. It dates back to the medieval ages with later influences of the following eras. Nowadays, the whole complex houses museums and a town hall.

Keep going on and now you can admire beautiful, narrow streets and alleys interspersed with little local shops and cafes. There is also a Jewish Museum in the center of Pitigliano. It’s worth mentioning that Pitigliano was once called “Little Jerusalem.”

There are two parallel little streets that begin at the Piazza della Repubblica—Via Zuccarelli and Via Roma. Both lead to the other end of Pitigliano. Follow the first one and then do a loop and come back down the other street.

At the end of Via Roma, there is the beautiful church of Santa Maria with a fountain where you can refill your bottle of water or just drink it. Right after the church, you enter Piazza San Gregorio. The main cathedral of Pitigliano is situated here —The Saint Peter and Paul Cathedral.

In this piazza, you can find some of the best restaurants (cheaper than near Piazza della Repubblica). Try some wild boar dishes famous for this region!

The Best View of Pitigliano

After a delicious meal in one of the medieval restaurants, and after doing the “loop walk,” come out of the old town and go to the new part of the village. It’s situated on the opposite side of the cliff and it offers the best views over Pitigliano from outside. I could sit on one of the benches and just stare at it forever.

Another great view point is alongside the main road to Pitigliano. Unfortunately, public buses don’t stop there, it’s quite far from the town center and walking up that road is pretty dangerous—it’s steep, has many sharp turns, and there is no pavement or sidewalk whatsoever. There is a cliff wall instead. In spite of all this, I ventured out of Pitigliano, got to that view point walking, and took some amazing photos. However, if you want to spend your time in Pitigliano in peace, stress-free, I wouldn’t recommend such a walk.