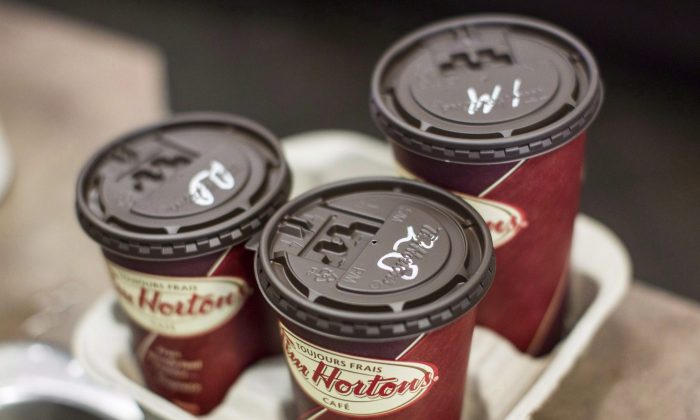 Cups of coffee sit on a counter in a Tim Hortons in Oakville, Ontario. (The Canadian Press/Chris Young)
Business

TORONTO—Your morning stop at Tim Hortons is about to get a bit more expensive.

The restaurant chain says it plans to raise prices for both coffee and breakfast sandwiches starting next Wednesday, Nov. 26.

A cup of coffee will go up by 10 cents, on average, though the change will vary by region, and the price of a breakfast sandwich will also rise in all provinces except Ontario.

“We have been able to hold our pricing stable since spring of 2011; however, due to rising operational costs there will be a moderate increase,” spokeswoman Michelle Robichaud said in an email.

The cost of breakfast sandwiches, like bacon and egg on an English muffin and the turkey sausage sandwich, will go up 10 cents to $2.99 before tax.

The move comes as Tim Hortons says it faces “significantly higher operating costs,” which include rising prices for coffee beans and meat on the commodities market.

But it’s not just food prices that have been expensive for the company.

During the third quarter, Tim Hortons booked $27.3 million in costs related to Burger King’s agreement to buy the company. The deal is worth more than US$11 billion in stock and cash, but still requires the approval of shareholders and regulators.

Earlier this month, Tim Hortons chief financial officer Cynthia Devine hinted that a coffee price increase could be on the horizon as futures contracts for Arabica beans nearly doubled this year due to various factors, including lack of rain in Brazil.

Other coffee companies have already pushed their prices higher, including Starbucks, which made the move during the summer; Keurig K-Cup maker Green Mountain Coffee Roasters; and J.M. Smucker, which makes the Folgers brand.